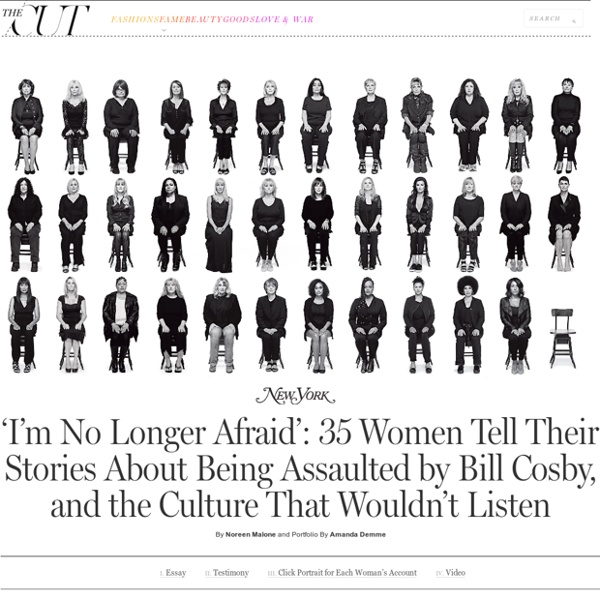 More has changed in the past few years for women who allege rape than in all the decades since the women’s movement began. Consider the evidence of October 2014, when a Philadelphia magazine reporter at a Hannibal Buress show uploaded a clip of the comedian talking about Bill Cosby: “He gets on TV, ‘Pull your pants up, black people … I can talk down to you because I had a successful sitcom.’ Yeah, but you rape women, Bill Cosby, so turn the crazy down a couple notches … I guess I want to just at least make it weird for you to watch Cosby Show reruns. Dude’s image, for the most part, it’s fucking public Teflon image. Perhaps the most shocking thing wasn’t that Buress had called Cosby a rapist; it was that the world had actually heard him. Read her story Name: Beverly Johnson Age: 62 Occupation: model, actress Alleged Assault: mid-1980s Johnson got a call from her agent saying Cosby wanted Johnson to audition for a small role on The Cosby Show. « Back to Article Name: Patricia Leary Steuer Age: Related:  Curiosities

Jamestown excavation unearths four bodies — and a mystery in a small box Archaeologists have discovered the graves of four founders of Jamestown, Va. The historic figures were buried in the long-vanished church built inside James Fort in 1608. (Jason Aldag/The Washington Post) JAMESTOWN, Va. — When his friends buried Capt. Gabriel Archer here about 1609, they dug his grave inside a church, lowered his coffin into the ground and placed a sealed silver box on the lid. This English outpost was then a desperate place. The tiny, hexagonal box, etched with the letter “M,” contained seven bone fragments and a small lead vial, and it probably was an object of veneration, cherished as disaster closed in on the colony. On Tuesday, more than 400 years after the mysterious box was buried, Jamestown Rediscovery and the Smithsonian Institution announced that archaeologists have found it, as well as the graves of Archer and three other VIPs. [The man who found James Fort] It also raises intriguing questions about Jamestown’s first residents. Unearthing a 400-year-old gravesite

CIA Meddling, Race Riots, and a Phantom Death Squad GEORGETOWN, Guyana — A jumbie, in Guyana, is an evil spirit. The term derives from the same Kikongo word — West African, like many of the enslaved who once toiled in this tiny South American IAountry — that zombie does. A rich cast of jumbies, evocative of Guyana’s history, populates the nation’s folklore and its country lanes, many of which were unlit well into the late 20th century. The lack of electricity was bad for economic development, but good for telling stories of the supernatural. In the glow of kerosene lamps, tales were spun about the Land Master, a spectral planter on horseback placated only by rum and cigarettes, or the churail, a wild-haired woman walking the night, inconsolable after dying in childbirth; pregnant women who saw this figure were fated to lose their babies. The PNC’s present avatar led the multiracial, but majority-black coalition seeking to unseat the PPP this year; the coalition’s presidential candidate was retired Brig. JUAN BARRETO/AFP/Getty Images

Of Love and Other Demographics Three months ago, Guyana’s new president, then the candidate of an opposition coalition hoping to unseat the country’s ruling party, was saying goodbye to his host, who had arranged a sumptuous curry dinner for the politician with potential donors at a home in New York City. The middle-class professionals around the table, all of Indian origin, had warmly welcomed David Granger, a candidate with deep roots in a party long seen as representing the interests of African Guyanese. That night in Queens, while courting the dollars and goodwill of the country’s large diaspora in the United States, Granger joked more than once that Guyana was a country divided in two: between those in North America, and those in South America. The quip was a lighthearted allusion to another, deeper divide in this former outpost of the British empire, once worked by enslaved Africans then indentured Indians. Interracial couple from election day. Photo © Adrian Browne, Stabroek News Feature image © Gaiutra Bahadur

Norah Jones or Sex Pistols? Thinking style molds taste: study DuPont and the Chemistry of Deception KEN WAMSLEY SOMETIMES DREAMS that he’s playing softball again. He’ll be at center field, just like when he played slow pitch back in his teens, or pounding the ball over the fence as the crowd goes wild. Other times, he’s somehow inexplicably back at work in the lab. Wamsley calls them nightmares, these stories that play out in his sleep, but really the only scary part is the end, when “I wake up and I have no rectum anymore.” Wamsley is 73. He enjoyed the work, particularly the precision and care it required. At the time, Wamsley and his coworkers weren’t particularly concerned about the strange stuff. Today Wamsley suffers from ulcerative colitis, a bowel condition that causes him sudden bouts of diarrhea. Sometimes, between napping or watching baseball on TV, Wamsley’s mind drifts back to his DuPont days and he wonders not just about the dust that coated his old workplace but also about his bosses who offered their casual assurances about the chemical years ago. “Who knew?”

How language can affect the way we think Keith Chen (TED Talk: Could your language affect your ability to save money?) might be an economist, but he wants to talk about language. For instance, he points out, in Chinese, saying “this is my uncle” is not as straightforward as you might think. “All of this information is obligatory. This got Chen wondering: Is there a connection between language and how we think and behave? While “futured languages,” like English, distinguish between the past, present and future, “futureless languages” like Chinese use the same phrasing to describe the events of yesterday, today and tomorrow. But that’s only the beginning. Navigation and Pormpuraawans In Pormpuraaw, an Australian Aboriginal community, you wouldn’t refer to an object as on your “left” or “right,” but rather as “northeast” or “southwest,” writes Stanford psychology professor Lera Boroditsky (an expert in linguistic-cultural connections) in the Wall Street Journal. Featured illustration via iStock.

Kill the Password: Why a String of Characters Can't Protect Us Anymore You have a secret that can ruin your life. It’s not a well-kept secret, either. Just a simple string of characters—maybe six of them if you’re careless, 16 if you’re cautious—that can reveal everything about you. Your email. Your bank account. No matter how complex, no matter how unique, your passwords can no longer protect you. Look around. This summer, hackers destroyed my entire digital life in the span of an hour. The age of the password is over. Since that awful day, I’ve devoted myself to researching the world of online security. First thing I do? This summer I learned how to get into, well, everything. The common weakness in these hacks is the password. Passwords are as old as civilization. In 413 BC, at the height of the Peloponnesian War, the Athenian general Demosthenes landed in Sicily with 5,000 soldiers to assist in the attack on Syracusae. The first computers to use passwords were likely those in MIT’s Compatible Time-Sharing System, developed in 1961. Apple: OK.

Why English as the Universal Language of Science Is a Problem for Research Technology The vast majority of scientific papers today are published in English. What gets lost when other languages get left out? Please consider disabling it for our site, or supporting our work in one of these ways Subscribe Now > Newton’s Principia Mathematica was written in Latin; Einstein’s first influential papers were written in German; Marie Curie’s work was published in French. Since the middle of the last century, things have shifted in the global scientific community. A 2012 study from the scientific-research publication Research Trends examined articles collected by SCOPUS, the world’s largest database for peer-reviewed journals. This gulf between English and the other languages means that non-English articles, when they get written at all, may reach a more limited audience. It wasn’t always this way. “Since Latin was no specific nation’s native tongue, and scholars all across European and Arabic societies could make equal use of it, no one ‘owned’ the language.

Does Language Influence Culture? (Please see Corrections & Amplifications below.) Do the languages we speak shape the way we think? Do they merely express thoughts, or do the structures in languages (without our knowledge or consent) shape the very thoughts we wish to express? Take "Humpty Dumpty sat on a..." In Russian, you would have to mark tense and also gender, changing the verb if Mrs. In Turkish, you would have to include in the verb how you acquired this information. Do English, Indonesian, Russian and Turkish speakers end up attending to, understanding, and remembering their experiences differently simply because they speak different languages? These questions touch on all the major controversies in the study of mind, with important implications for politics, law and religion. The question of whether languages shape the way we think goes back centuries; Charlemagne proclaimed that "to have a second language is to have a second soul." Differences in how people think about space don't end there.

Should You Be Capitalizing the Word 'Internet'? If you’re a writer or an editor or a grammar nerd, or if you just happen to do a lot of reading about technology and you’ve been around for a while, you may have noticed a trend for the word “Internet” to be written with a lower-case “i” instead of capital “I”. The process is called decapitalization, but “internet” is nothing new. In 2004, Wired News’ copy chief Tony Long wrote: “Effective with this sentence, Wired News will no longer capitalize the “I” in internet. Tony Long was wrong. WIRED opinion About Susan Herring is a professor of information science and linguistics at Indiana University. The tug-of-war has been going on for years. According to Bob Wyman, a Google tech staffer and long-time Net expert, the “I” should be capitalized to make clear the difference in meaning between the Internet (the global network that evolved out of ARPANET, the early Pentagon network), and any generic internet, or computer network connecting a number of smaller networks. Go Back to Top.

5 Myths About How Teens Use Technology You’re not imagining it. According to a robust new study from Common Sense Media, both tweens and teens spend an inordinate amount of time on their screens, an average of four and half hours for tweens (from 8 to 12 years of age) and six and half hours for teens (13 to 18 years of age). But those numbers hide a more complex picture, one with some obvious truths and some surprises. The study looked at a wide range of media-related activities, from old school faves like reading and listening to the radio, through more recent arrivals, such as using social media and video chatting. The researchers asked the kids about what devices they used and how much time they spent on them. Here’s a handy graphical representation of what they found:

untitled VENEZUELANS are famously inventive with words. After 17 years of chavismo, the left-wing ideology of the late president, Hugo Chávez, they have plenty of material. Insults aimed at his “Bolivarian revolution” abound; the regime, now led by Nicolás Maduro, hurls its own ammunition. Bachaquero. Boliburguesía. Enchufado. Patriota cooperante. Pelucones. Vendepatria.The opposite of a patriota cooperante, who will sell Venezuela to the highest bidder.