Guns in America. John Paul Stevens: Repeal the Second Amendment. I’ve had guns pointed at me. I’m glad I didn’t have one. “You know, I really believe — you don’t know until you test it — but I think I . . . 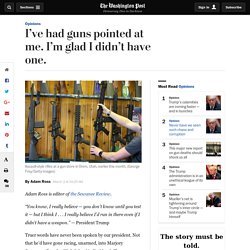 I really believe I’d run in there even if I didn’t have a weapon.” — President Trump Truer words have never been spoken by our president. Florida school shooting survivor to lawmakers: 'Shame on you' CNN will hold a town hall with the victims' classmates, parents and community members. 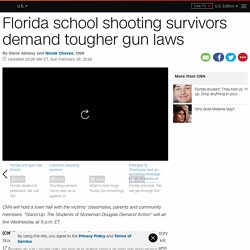 "Stand Up: The Students of Stoneman Douglas Demand Action" will air live Wednesday at 9 p.m. ET. RAW: Ex-wife of Orlando shooter speaks out. More People in Missouri Died from Guns in 2014 Than Car Accidents. Click to enlarge Photo courtesy of Flickr/Er 24 EMS Ltd. 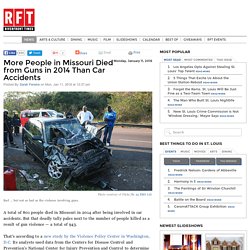 Bad ... but not as bad as the violence involving guns. Republicans, Guns and Abortion. The presidential race has degenerated to the point where I am going to attempt to cheer you up by talking about abortion and guns. 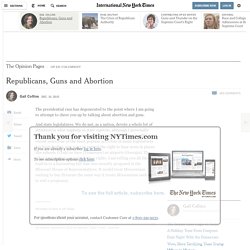 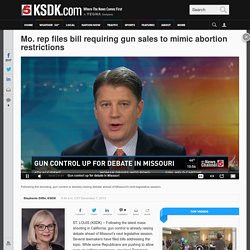 LOUIS (KSDK) – Following the latest mass shooting in California, gun control is already raising debate ahead of Missouri's next legislative session. Several lawmakers have filed bills addressing the topic. While some Republicans are pushing to allow guns on college campuses, one local Democrat wants it to be as difficult for Missourians to buy a gun as it is to get an abortion. "Americans basically are sick, we're sick to our stomachs," said Missouri Rep.

Infographic: A look at gun deaths and permits - Occasional Planet. A person in New York is less likely to die by a gun (murder, suicide, or accident) than in Missouri. 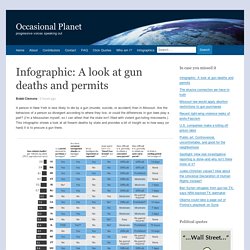 Are the behaviors of a person so divergent according to where they live, or could the differences in gun laws play a part? End the Gun Epidemic in America. Photo All decent people feel sorrow and righteous fury about the latest slaughter of innocents, in California. Law enforcement and intelligence agencies are searching for motivations, including the vital question of how the murderers might have been connected to international terrorism. That is right and proper. But motives do not matter to the dead in California, nor did they in Colorado, Oregon, South Carolina, Virginia, Connecticut and far too many other places.

The attention and anger of Americans should also be directed at the elected leaders whose job is to keep us safe but who place a higher premium on the money and political power of an industry dedicated to profiting from the unfettered spread of ever more powerful firearms. It is a moral outrage and a national disgrace that civilians can legally purchase weapons designed specifically to kill people with brutal speed and efficiency. Continue reading the main story But at least those countries are trying. 1,052 mass shootings in 1,066 days: this is what America's gun crisis looks like. How Often Do Mass Shootings Occur? On Average, Every Day, Records Show. Photo More than one a day. 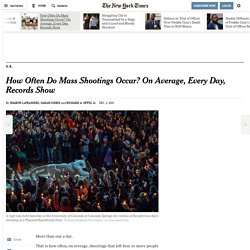 That is how often, on average, shootings that left four or more people wounded or dead occurred in the United States this year, according to compilations of episodes derived from news reports. Including the worst mass shooting of the year, which unfolded horrifically on Wednesday in San Bernardino, Calif., a total of 462 people have died and 1,314 have been wounded in such attacks this year, many of which occurred on streets or in public settings, the databases indicate. Brooke Baldwin: There's been a shooting ... again. I know it's my job as a journalist. 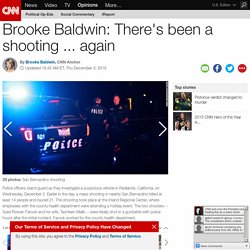 But in situations like these, I'm getting sick of speaking the words "active shooter situation. " One map that puts America's gun violence epidemic in perspective. The United States owns way, way more guns per capita than the rest of the world. 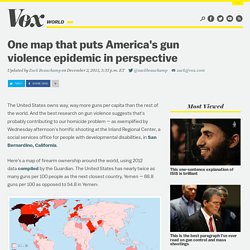 And the best research on gun violence suggests that's probably contributing to our homicide problem — as exemplified by Wednesday afternoon's horrific shooting at the Inland Regional Center, a social services office for people with developmental disabilities, in San Bernardino, California. Here's a map of firearm ownership around the world, using 2012 data compiled by the Guardian. The United States has nearly twice as many guns per 100 people as the next closest country, Yemen — 88.8 guns per 100 as opposed to 54.8 in Yemen: St-louis-gun-crime. Flights to Disney World and Back 26,000Years of Public In-State Tuition Last year,1,850 shootings occurred in the City of St. 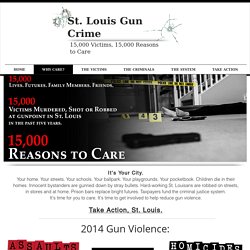 Louis. Forget about changing the Second Amendment. And stop focusing on mass killings. (Karen Bleier/AFP/Getty Images) The recent spate of high profile shootings — in Charleston, Oregon, and elsewhere — has again propelled forward the question of how to combat gun violence, suggesting it might even become a meaningful issue in 2016.

So there are two things liberals and Democrats might want to start clarifying right now about how they’re going to approach this debate: