Untitled. WASHINGTON - Children's viewing of violent TV shows, their identification with aggressive same-sex TV characters, and their perceptions that TV violence is realistic are all linked to later aggression as young adults, for both males and females. 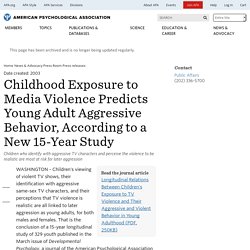 That is the conclusion of a 15-year longitudinal study of 329 youth published in the March issue of Developmental Psychology, a journal of the American Psychological Association (APA). These findings hold true for any child from any family, regardless of the child's initial aggression levels, their intellectual capabilities, their social status as measured by their parents' education or occupation, their parents' aggressiveness, or the mother's and father's parenting style. Psychologists L. Rowell Huesmann, Ph.D., Jessica Moise-Titus, Ph.D., Cheryl-Lynn Podolski, M.A., and Leonard D. Might these results simply be an indication that more aggressive children like to watch violent TV shows? Reporters: Lead author L. United States Crime Rates 1960 - 2013.

Occupational Violence - NIOSH Workplace Safety and Health Topic. The magnitude of workplace violence in the United States is measured with fatal and nonfatal statistics from several sources. 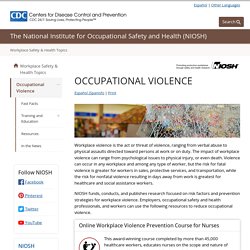 The Bureau of Labor Statistics Survey of Occupational Injuries and Illnesses (SOII) reported an estimated 154,460 nonfatal occupational injuries and illnesses involving days away from work during the 2003 to 2012 time period. Grants awarded under the 2002 RFA were: Grants awarded under the 2008 RFA were: NIOSH Publications and Products - Violence in the Workplace (96-100) July 1996 DHHS (NIOSH) Publication Number 96-100 Homicide in the Workplace NIOSH Data Data from the National Traumatic Occupational Fatalities (NTOF) Surveillance System indicate that 9,937 workplace homicides occurred during the 13-year period from 1980 through 1992, with an average workplace homicide rate of 0.70/100,000 workers (Table 1) [NIOSH 1995]. 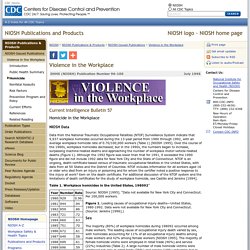 America’s Productivity Climbs, but Wages Stagnate. Photo FEDERAL income tax rates will rise for the wealthiest Americans, and certain tax loopholes might get closed this year. 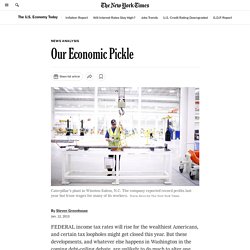 But these developments, and whatever else happens in Washington in the coming debt-ceiling debate, are unlikely to do much to alter one major factor contributing to : stagnant wages. For millions of workers, wages have flatlined. Take Caterpillar, long a symbol of American industry: while it reported record profits last year, it insisted on a six-year wage freeze for many of its blue-collar workers. Wages have fallen to a record low as a share of America’s gross domestic product. “We went almost a century where the labor share was pretty stable and we shared prosperity,” says Lawrence Katz, a labor economist at Harvard. Some economists say it is wrong to look at just wages because other aspects of employee compensation, notably health costs, have risen. Workplace Violence, 1993-2009 - wv09.pdf. This Is Our America: Workplace Violence Since 1986, A Brief History.

The Georgia FedEx rampage is just the latest in a series of workplace shootings going back to 1986. 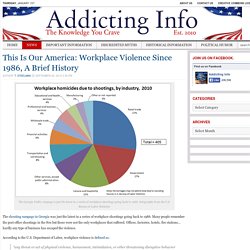 Infographic from the U.S. Bureau of Labor Statistics The shooting rampage in Georgia was just the latest in a series of workplace shootings going back to 1986. Many people remember the post office shootings in the 80s but those were not the only workplaces that suffered. Offices, factories, hotels, fire stations… hardly any type of business has escaped the violence. According to the U.S. Family Structure Helps Explain Difference in Violence. Radley Balko's point about immigrants helping to make El Paso, Texas a safe city ("Notable & Quotable," July 9) is valid, but it doesn't go far enough in explaining why this might be so. 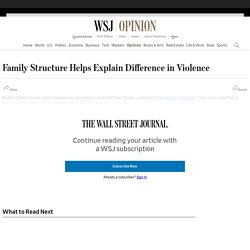 Since the publication of the 2007 CQ Press survey that labeled Detroit the nation's "most dangerous" large city, I have worked with a group trying to identify the obstacles to significant crime reduction. El Paso, the third "safest" city in the survey, is about as poor and the people as undereducated as in Detroit. The most distinctive socioeconomic difference between El Paso and Detroit is the Texas city's far greater number of married couples as a percentage of total households: 48% versus Detroit's 24%. There was a time, not so long ago, when women in this predicament were called "welfare queens.

" In reality, they are the result of a long and lamentable national history, poor leadership at many levels and poorly conceived public policies. These public policies have afflicted whites as well as blacks. Occupational Violence - NIOSH Workplace Safety and Health Topic. Violence in the workplace: new perspectives in forensic mental health services in the USA. Abstract Background This paper reviews current research on workplace violence in the USA and offers suggestions concerning the roles that mental health professionals with forensic expertise can play in this expanding field. 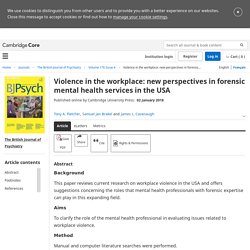 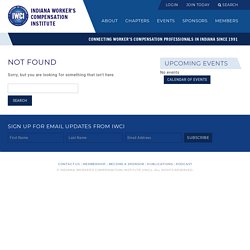 Hale, Ph.D., Psychologist March 2002 Gunshots recently sounded in a workplace in Northern Indiana. Sadly, the loss of two lives, and multiple injuries resulted from the actions on one employee. The workplace is generally a safe place. Occupational Violence - NIOSH Workplace Safety and Health Topic. Violence and schizophrenia: examining the evidence. Abstract Background It is now accepted that people with schizophrenia are significantly more likely to be violent than other members of the general population. 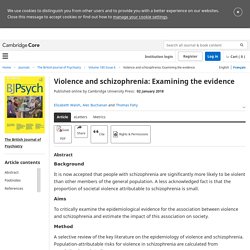 A less acknowledged fact is that the proportion of societal violence attributable to schizophrenia is small. Aims To critically examine the epidemiological evidence for the association between violence and schizophrenia and estimate the impact of this association on society. Duwe.pdf. Microsoft Word - authorityriskfinalreport.DOC - Developing recidivism.pdf. 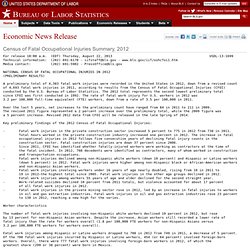 (EDT) Thursday, August 22, 2013 USDL-13-1699 Technical information: (202) 691-6170 - iifstaff@bls.gov - www.bls.gov/iif/oshcfoi1.htm Media contact: (202) 691-5902 - PressOffice@bls.gov NATIONAL CENSUS OF FATAL OCCUPATIONAL INJURIES IN 2012 (PRELIMINARY RESULTS) A preliminary total of 4,383 fatal work injuries were recorded in the United States in 2012, down from a revised count of 4,693 fatal work injuries in 2011, according to results from the Census of Fatal Occupational Injuries (CFOI) conducted by the U.S. Bureau of Labor Statistics. Capital Punishment & Deterrence- Shepherd.pdf. Punishment: Problems and Negative Side Effects. Controlling professional behavior: A review of the effects of punishment on human behavior. Guidelines for Preventing Workplace Violence for Health Care & Social Service Workers. Employers who would like help in implementing an appropriate workplace violence prevention program can turn to the OSHA Consultation Service provided in their State.

To contact this service, see OSHA's website at www.osha.gov or call (800) 321-OSHA. OSHA's efforts to help employers combat workplace violence are complemented by those of NIOSH, public safety officials, trade associations, unions, insurers and human resource and employee assistance professionals, as well as other interested groups. Employers and employees may contact these groups for additional advice and information. Ending corporal punishment in Mauritania. By Christian Skoog and Brahim Ould Isselmou ATAR, Mauritania, 6 May 2009 – In the first hour after his arrival at a mahadra (Koranic school) in Atar, Ahmed was beaten several times. Over the next four months, he suffered daily. His ‘Cheikh’, or teacher, used many different tools to punish Ahmed and his friends. Some of the boys who are considered troublemakers were tied up to the trunks of trees and left outside for hours, suffering from the heat and hunger.

“I pray to Allah that I no longer have to wear my torn shirt to cover the scars on my back,” said Ahmed. Controlling professional behavior: A review of the effects of punishment on human behavior. Violence in the Workplace-A growing problem in America. Violence in the Workplace-A growing problem in America By: Jason B. Morris, President jmorris@employeescreen.com Background Information Services, Inc. Workplace violence is a daily occupational risk and hazard for many workers in today’s society. Recently this issue has been painted all over the media.

Workplace violence began generating concern among public and private sector organizations in the United States in 1990, and the awareness has increased steadily. Causes of Workplace Violence. Attackers and Victims The attacker usually fits into one of the following categories: a staff member, a client or customer, or a third party or visitor from outside the organization.

The following traits generally describe the victim of workplace violence: wearing a uniform, which is perceived very negatively by the attacker, affected by the stress of overwork or certain light forms of mental illness leading to misunderstanding or misinterpretation on the part of the person who is attacked, lack of experience in resolving difficult problems at work,women are more likely than men to be victims of violence but respond less aggressively; also more prone are personality types that tend to be demonstrative, expansive, less flexible or less displomatic, as opposed to the kind of person who tends to be self-effacing in difficult or delicate situations in the workplace. Workplace violence: impact, causes, and prevention. [Work. 2012. Economic Stress and Domestic Violence. Domestic Violence.