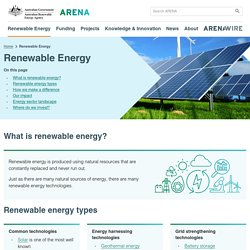 Transitioning the electricity system to deal with an increasing share of renewables and different ways of operating is challenging, but it presents many opportunities to help businesses manage their energy costs, as well as capture new sources of growth. Murray-Darling Basin Authority. Murray-Darling Basin management. Bill McCormick, Science, Technology, Environment and Resources Agricultural water use The Murray-Darling Basin (MDB) covers 14% of Australia and is home to over two million people. 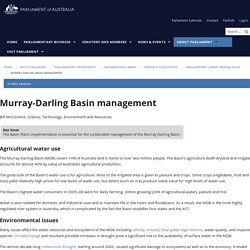 The Basin’s agriculture (both dryland and irrigated) accounts for almost 40% by value of Australia’s agricultural production. Department of the Environment and Energy. Coasts and oceans: Ecosystem conditions. Theme commentaryTrevor J Ward, Greenward Consulting, Perth, Western Australia Alan Butler, CSIRO Marine and Atmospheric Research, Brisbane, Queensland prepared for the 2006 Australian State of the Environment Committee, 2006 Ocean ecosystems Australia has oceanic ecosystem features of great international interest and of great importance for fisheries, biodiversity and control of our climate, such as the East Australia Current and the Leeuwin Current. 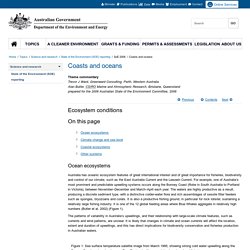 For example, one of Australia’s most prominent and predictable upwelling systems occurs along the Bonney Coast (Robe in South Australia to Portland in Victoria), between November–December and March–April each year. 2006. Among the extreme environmental conditions experienced by plants and animals in Australia's deserts are aridity, heat and salinity. 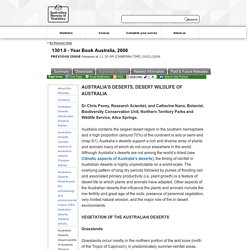 Plants and animals have evolved a range of morphological, behavioural and physiological adaptations to enable persistence and reproduction in desert environments. The response of plants to the unpredictability of rainfall in Australian deserts can be broadly classed as drought tolerance or drought avoidance. Drought tolerance is achieved by several means. Certain perennial plants (known as xerophytes) have a physical structure that promotes water storage and conservative water use, enabling them to thrive in areas where water is usually scarce. Other species achieve drought tolerance by carrying out photosynthesis using a metabolic pathway that involves production of a four-carbon molecule.

Desert perennials can avoid death through moisture stress by remaining dormant during dry periods then ‘springing to life’ when water is suddenly available. S19. Australian Ecosystems Living Landscape - watch the 10 part video series here. Free for Schools and Students. Education Resources for Schools. Great Barrier Reef coastal ecosystems. The extent of coastal ecosystems – and the way they function – can have a big impact on the long-term health and resilience of the Great Barrier Reef. 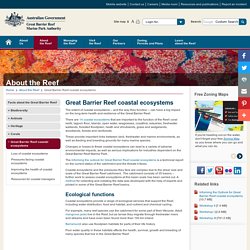 There are 14 coastal ecosystems that are important to the function of the Reef: coral reefs, lagoon floor, islands, open water, seagrasses, coastline, estuaries, freshwater wetlands, forested floodplain, heath and shrublands, grass and sedgelands, woodlands, forests and rainforests. These provide important links between land, freshwater and marine environments, as well as feeding and breeding grounds for many marine species. Changes or losses to these coastal ecosystems can lead to a variety of adverse environmental impacts, as well as serious implications for industries dependent on the Great Barrier Reef Marine Park. Earth Resources - Earth Resources. Natural Resources of the Earth. By: Kelly-Rose Bradford - Updated: 2 May 2017| *Discuss. 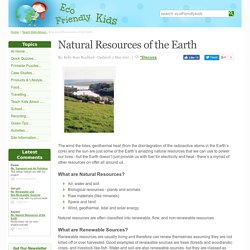 Natural Resources, the Environment and Ecosystems. Throughout time, humans have learned to exist in many locations on the earth. 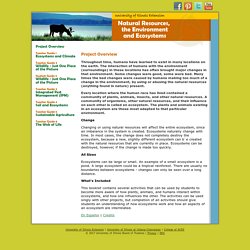 The interaction of humans with the environment (surroundings) in these locations has often brought major changes in that environment. Some changes were good, some were bad. Many times the bad changes were caused by humans making too much of a change in the environment, by using or abusing the natural resources (anything found in nature) present. Ecological Footprint - Global Footprint Network. Humans have already used up 2015's supply of Earth's resources – analysis. Humans have exhausted a year’s supply of natural resources in less than eight months, according to an analysis of the demands the world’s population are placing on the planet. 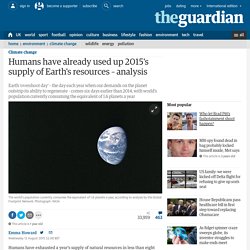 The Earth’s “overshoot day” for 2015, the point at which humanity goes into ecological debt, will occur on Thursday six days earlier than last year, based on an estimate by the Global Footprint Network (GFN). The date is based on a comparison of humanity’s demands – in terms of carbon emissions, cropland, fish stocks, and the use of forests for timber – with the planet’s ability to regenerate such resources and naturally absorb the carbon emitted. That implies the excess demands being placed on natural systems are doing more permanent harm that cannot be easily undone. Sustainability. Sustainability is the capacity to endure. 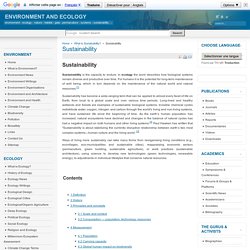 In ecology the word describes how biological systems remain diverse and productive over time. For humans it is the potential for long-term maintenance of well being, which in turn depends on the maintenance of the natural world and natural resources.[1] Sustainability has become a wide-ranging term that can be applied to almost every facet of life on Earth, from local to a global scale and over various time periods. Science Mission Directorate. The Earth's ecosystems and biogeochemical cycles (such as carbon, nitrogen, and phosphorus) both drive and respond to environmental changes ranging from local to global scales. 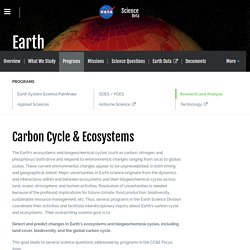 These current environmental changes appear to be unprecedented, in both timing and geographical extent. Ecological Society of America. Earth Stewardship : Sustaining and enhancing Earth’s life-support systems Earth stewardship involves shaping trajectories of social-ecological change at local-to-global scales to enhance ecosystem resilience and human well-being. Over the next decade or two, society has a window of opportunity to radically redefine our relationship with the planet to reduce risks of dangerous global changes that could otherwise seriously degrade Earth’s life-support systems. Building on the U.N. Millennium Development Goals (MDG), which provide a vision for a sustainable and equitable future, and ESA’s Sustainable Biosphere Initiative, which defines a research agenda for a sustainable biosphere, earth stewardship uses sustainability science to shape pathways toward MDG goals during a time of rapid social-ecological change.

Resources: Scientific Facts on Ecosystem Change. Home » Ecosystem Change » Level 1 Context - Human well-being is highly dependent on ecosystems and the benefits they provide such as food and drinkable water. Over the past 50 years, however, humans have had a tremendous impact on their environment. To better understand the consequences of current changes to ecosystems and to evaluate scenarios for the future, UN Secretary General Kofi Annan has launched a comprehensive scientific study, the Millennium Ecosystem Assessment. What actions could be taken to limit harmful consequences of ecosystem degradation? Latest update: 15 March 2005 1. 1.1 Virtually all of Earth’s ecosystems have been significantly transformed through human actions.