Build an attached solar greenhouse. I do not have a green thumb. 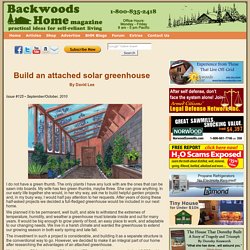 The only plants I have any luck with are the ones that can be sawn into boards. My wife has two green thumbs, maybe three. She can grow anything. Cob House Surrounded by Geodesic Dome in the Arctic Circle. Placing the 25-foot-high dome around the five-bedroom, two-bathroom home gave the six-person family protection from strong winds and heavy snow loads, as well as cutting down on heating costs. 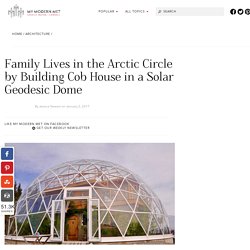 The geodesic dome, which also covers a garden area, gives the family the necessary greenhouse environment to grow much of their food. Apples, cherries, plums, apricots, kiwis, grapes, cucumbers, tomatoes, herbs, squash, and melons are just some of what they can grow in an area that is without sunlight for three months a year. The cozy, rustic interior creates a warm, welcoming environment away from the Arctic Circle’s cold climate. And the spectacular views of nature and the Northern Lights certainly provide unique entertainment for the family on cold winter nights.

“We love the house; it has a soul of its own and it feels very personal. After three years of living in The Nature House—built entirely by the family and their friends—they are thriving. Wioska szklanych dom&oacute;w jest samowystarczalna pod względem produkcji żywności i energii. This Swedish Couple Builds Greenhouse Around Home to Grow Food and Keep Warm Year Round.

The average January temperature in Stockholm Sweden is 27 degrees Fahrenheit. 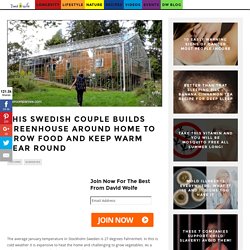 In this is cold weather it is expensive to heat the home and challenging to grow vegetables. As a solution to these issues, Charles Sacilotto and Marie Grammer created a massive greenhouse that encloses their home. They gave Fair Companies a tour of their “Naurhus” (aka Nature House) that is encompassed by a 4-millimeter pane of glass. The costs: $84,000 for the installation. Healthy News and Information. By THE YARDENER With unfavorable winter temperatures of a 27 degree January average, living in Stockholm, Sweden let alone growing food in the wintertime would be unimaginable without some form of heat. 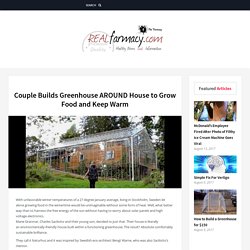 Well, what better way than to harness the free energy of the sun without having to worry about solar panels and high voltage electronics. Family wraps home in greenhouse to warm up Stockholm weather. Maison D: A no-frills family home at an affordable price - Images. Are our houses over-engineered? 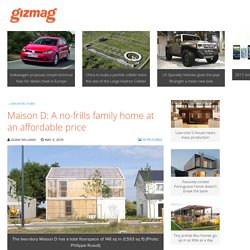 They're certainly expensive, thanks in part to the building materials and labor required to construct them. Maison D, by Fouquet Architecture Urbanisme, makes an interesting argument for using budget building materials to produce a stripped-down family house at a relatively affordable price. Located in a suburban area of Couëron, near Nantes, Western France, Maison D features the same kind of utilitarian aesthetic we've admired in Spanish homes like the Espinar House and the Pop Up House, but goes even further in the pursuit of saving a buck. The two-story home boasts a total floorspace of 148 sq m (1,593 sq ft), which is spread over two bathrooms, a car and a bicycle garage, a kitchen and dining area, a lounge, two bedrooms, a conservatory and a covered roof terrace.

The interior decor is dominated by unfinished wood and OSB (oriented strand board), with large sliding doors opening the rooms to the outside. Stunning prefab solar-powered GRoW Home has a thriving veggie greenhouse at its core. Old Man Winter is no match for the GRoW home, an ultra-efficient solar house that uses sustainable technologies to provide year-round vegetation and comfortable living even in the harshest Buffalo winter. 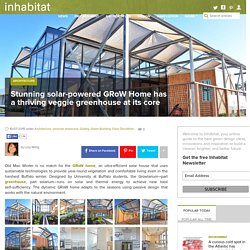 Designed by University at Buffalo students, the Growlarium—part greenhouse, part solarium—runs on solar and thermal energy to achieve near total self-sufficiency. The dynamic GRoW home adapts to the seasons using passive design that works with the natural environment. Designed and built for the 2015 Solar Decathlon, the GRoW Home was inspired by the growth of solar in New York State and by SolarCity’s decision to build a 1.2 million-square-foot solar factory, one of the largest in the Western hemisphere, in Buffalo. According to the team’s design philosophy, the GRoW home considers four key themes: to “nurture active stewardship, think functional flexibility, live with nature, and recognize energy hierarchy.” Earthbag Pit Greenhouse Plans. 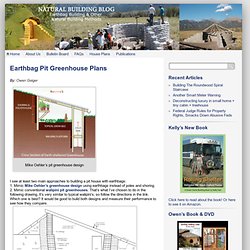 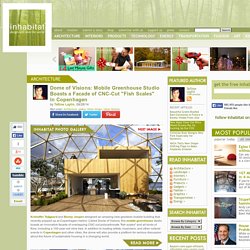 Called Dome of Visions, this mobile greenhouse studio boasts an innovative facade of overlapping CNC-cut polycarbonate "fish scales" and all kinds of flora, including a 100-year-old olive tree. In addition to hosting artists, musicians, and other cultural events in Copenhagen and other cities, the dome will also provide a platform for serious discussion about the future of sustainable housing in a changing world. Could this Glass 'Photon Space' House Make You Healthier and Happier? Could living in a glass house make you healthier? 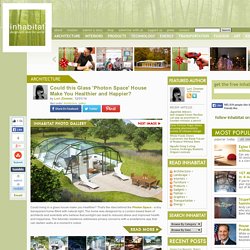 That's the idea behind the Photon Space - a tiny transparent home filled with natural light. The home was designed by a London-based team of architects and scientists who believe that sunlight can lead to reduced stress and improved health and happiness. The futuristic residence addresses privacy concerns with a smartphone app that can darken walls at a moment’s notice. Could living in a glass box be the key to happiness? The designers of The Photon Space think so. Related: PHOTOS: Tour Philip Johnson’s Famous Glass House in New Canaan, Connecticut Hours and hours of light flood through the double-glazed glass panels, which also block out solar radiation, ultra violet light and sound. Young couple quit jobs to build this glass house for $500. 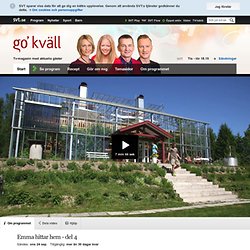