Development and standard of living 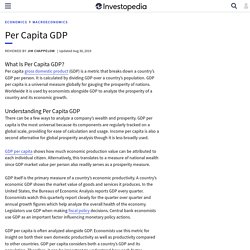 Per capita gross domestic product (GDP) is a metric that breaks down a country’s GDP per person. It is calculated by dividing GDP over a country’s population. GDP per capita is a universal measure globally for gauging the prosperity of nations. Worldwide it is used by economists alongside GDP to analyze the prosperity of a country and its economic growth. Understanding Per Capita GDP There can be a few ways to analyze a company’s wealth and prosperity. GDP per capita shows how much economic production value can be attributed to each individual citizen. GDP itself is the primary measure of a country’s economic productivity. GDP per capita is often analyzed alongside GDP. Key Takeaways Per capita GDP is a universal measure of national prosperity.Per capita GDP is calculated by dividing GDP over population.Small, rich countries and more developed industrial countries tend to have the highest per capita GDP. 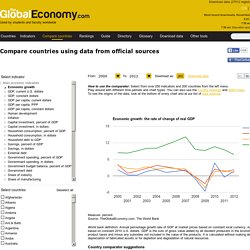 Play around with different time periods and chart types. You can also use the . To see the origins of the data, look at the bottom of every chart and at our list of . World bank definition: Annual percentage growth rate of GDP at market prices based on constant local currency. Aggregates are based on constant 2010 U.S. dollars. Country comparator suggestions The country comparison tool can be used to create interactive charts using over 150 indicators. Below are brief guidelines for country comparisons: Countries health wealth 2016 v84. List of countries by GDP (PPP) per capita - Wikipedia. Wikimedia list article Countries by GDP (PPP) per capita (Int$) in 2018 according to the IMF This page is a list of the countries of the world by gross domestic product (at purchasing power parity) per capita, i.e., the purchasing power parity (PPP) value of all final goods and services produced within a country in a given year, divided by the average (or mid-year) population for the same year. 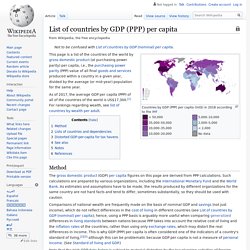 Method The gross domestic product (GDP) per capita figures on this page are derived from PPP calculations. Such calculations are prepared by various organizations, including the International Monetary Fund and the World Bank. Note that the Irish GDP data below is subject to material distortion by the tax planning activities of foreign multinationals in Ireland. 2015 Irish GDP was over 150% of 2015 Irish gross national income (GNI).

Lists of countries and dependencies All figures are in current international dollars, and rounded up or down to the nearest whole number. See also Notes References. Contrasts in development - Revision 1 - GCSE Geography - BBC Bitesize. A photo comparison. Chloropleth maps. Three minutes with Hans Rosling will change your mind about the world. Jörgen Hildebrandt Hans Rosling doesn’t consider himself an optimist or a pessimist but rather a ‘possibilist’. 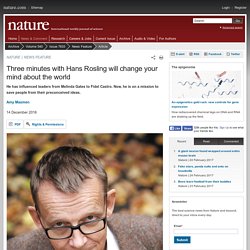 Hans Rosling knew never to flee from men wielding machetes. “The risk is higher if you run than if you face them,” he says. So, in 1989, when an angry mob confronted him at the field laboratory he had set up in what is now the Democratic Republic of the Congo, Rosling tried to appear calm. “I thought, ‘I need to use the resources I have, and I am good at talking’.” Rosling, a physician and epidemiologist, pulled from his knapsack a handful of photographs of people from different parts of Africa who had been crippled by konzo, an incurable disease that was affecting many in this community, too. He is still trying to arm influential people with facts. But among his fellow scientists, Rosling is less popular. So now, in the sunset of his career, Rosling is writing a book with his son Ola and his daughter-in-law Anna Rosling Rönnlund to dispel outdated beliefs. Life on the brink. Countries health wealth 2016 v151.