The Livestock Conservancy. The Giant Chinchilla is of American origin, developed in 1921 by Edward H. 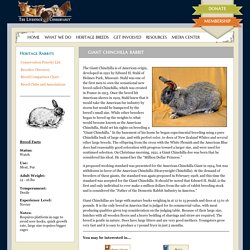 Stahl of Holmes Park, Missouri. Stahl was one of the first men to own the sensational new breed called Chinchilla, which was created in France in 1913. Once the breed hit American shores in 1919, Stahl knew that it would take the American fur industry by storm but would be hampered by the breed’s small size. While other breeders began to breed up the weights to what would become known as the American Chinchilla, Stahl set his sights on breeding a “Giant Chinchilla.” In the basement of his home he began experimental breeding using a pure Chinchilla buck of large size, and with perfect color, to does of New Zealand Whites and several other large breeds. About Welsh Harlequin Ducks - Moose Manor Farms. All About Welsh Harlequin Ducks True to their cultural heritage, the Welsh are a hardy and practical people. 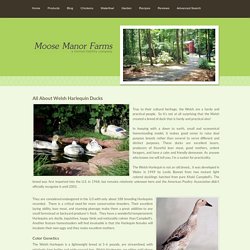 So it's not at all surprising that the Welsh created a breed of duck that is hardy and practical also! In keeping with a down to earth, small and economical homesteading model, it makes good sense to raise dual purpose breeds rather than several to serve different and distinct purposes. These ducks are excellent layers, producers of flavorful lean meat, good mothers, ardent foragers, and have a calm and friendly demeanor. As anyone who knows me will tell you, I'm a sucker for practicality.The Welsh Harlequin is not an old breed... it was developed in Wales in 1949 by Leslie Bonnet from two mutant light colored ducklings hatched from pure Khaki Campbell's. 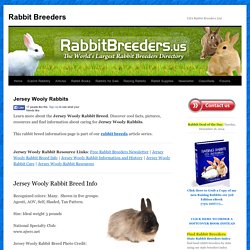 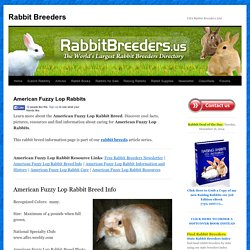 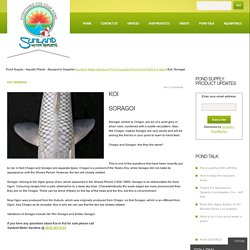 Pharaoh Coturnix Quail Chicks for sale. Hatching May to September. 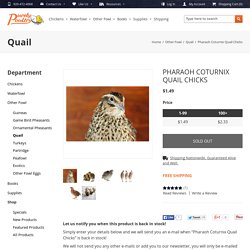 Quail may be the definitive dual purpose birds. They lay lots of eggs, are an excellent and delicious source of protein, they are quiet, don’t eat too much and easy to care for, they have a sweet sound, and are calm, docile animals. Production: Pharaoh Coturnix Quail hens will lay approximately 300 eggs per year, beginning at about 6-7 weeks of age. Button Quail Eggs. Button Quail Hatching Eggs.

About American Geese - Moose Manor Farms. The Livestock Conservancy. The Silver rabbit is one of the most ancient breeds of domestic rabbit. 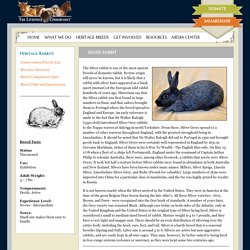 Its true origin will never be known, but it is likely that a rabbit with silver hairs appeared as a black sport (mutant) of the European wild rabbit hundreds of years ago. Historians say that the Silver rabbit was first found in large numbers in Siam, and that sailors brought them to Portugal where the breed spread to England and Europe. An early reference is made to the fact that Sir Walter Raleigh (1552-1618) introduced Silver Grey rabbits to the Nappa warren at Askrigg in north Yorkshire.

From there, Silver Greys spread to a number of other warrens throughout England, with the greatest stronghold being in Lincolnshire. It should be noted that Sir Walter Raleigh did sail to Portugal in 1592 and brought goods back to England. It is not known exactly when the Silver arrived in the United States. Anthereae polyphemus: life cycle photo journal of a saturniid moth. On August 10th, Signs of the coming pupation are observed.I noticed more waste than usual undeneath the caterpillar. 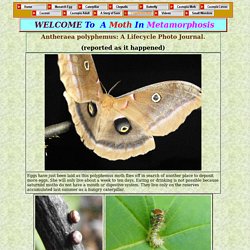 The larva had not moved or eaten recently. August 12th a new cocoon was visible. Total time as a caterpillar from hatching to pupation lasted from June 3rd until August 10th or 12th; a total of about 70 days. A note of interest: The six cecropia and single polyphemus caterpillars reared by me all spun cocoons within a week, yet, the polyphemus hatched from its egg thirty days before the cecropias. Note: Growth was rapid and appetite was good but, on the 25th it stopped eating and was seen crawling about. Seventy days is likely an unusually long time for a polyphemus to grow. The Livestock Conservancy. The Oberhasli (also known as the Oberhasli Brienzer) is a dairy breed developed in the mountainous cantons of Bern, Freiburg, Glarus, and Graubunden in Switzerland. 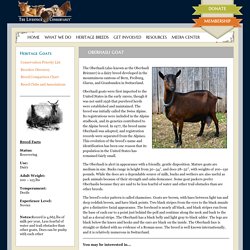 Oberhasli goats were first imported to the United States in the early 1900s, though it was not until 1936 that purebred herds were established and maintained. What's a Zebu? / International Miniature Zebu Association (IMZA) The Livestock Conservancy. Miniature donkeys have been valued in the Mediterranean region for over two thousand years. Citrus, Lemon Dwarf - Citrus limon 'Meyeri'