The Economics of Ecosystems and Biodiversity - TEEB 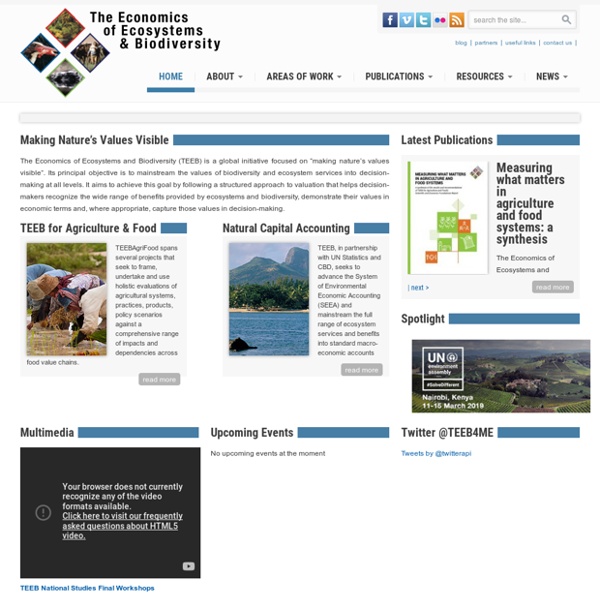 "One very simple, but radical, idea: to democratise Europe." An interview with Yanis Varoufakis Alex Sakalis: I’m very interested in this transnational, pan-European movement you are preparing to launch, the details of which you’ve been teasing us with... Yanis Varoufakis: I’m not teasing you. It’s just that it takes time to establish. AS: What forces are you hoping to bring together with this pan-European movement?

Biodiversity Andean Páramo Project "or" PPA The project "Conservation of Biodiversity in the Moors of North and Central Andes, is a regional initiative that works to conserve and sustainable use of grasslands in Venezuela , Colombia, Ecuador and Peru. Food for the Future: Conserving Crop Wild Relatives As the name suggests, a crop wild relative (CWR) is a wild plant species related to a domesticated crop. For centuries crop wild relatives have provided farmers with the genetic material to improve the nutritional quality of crops, enhance productivity, and provide cultivated varieties with resistance to pests and diseases. Managing Water Wisely to Save Wetlands and Waterbirds GEF-IUCN International Dialogue on the Global Commons and Science Day - 2016 International Dialogue on the Global Commons The Global Commons: tragedy or opportunity? The world is reaching the limits of what it can provide sustainably.

Cinva Ram [edit] Overview The Cinva Ram was developed in 1952 by Raul Ramirez of the Inter-American housing center in Columbia. It was very popular in Columbia and neighbor developing countries, due to an effective low cost design. With this machine, 2 workers, 1 loading the machine and the other working the press, can produce roughly 2 bricks per minute solidworks files note, these plans are so far only on paper, the ram head might be to short, in a few days the prototype will be complete and ready for testing.

Quick Facts That Debunk Hysterical Global Warming Claims « LEADING MALAYSIAN NEOCON Join the Global Warming is Unfactual group on Facebook! Take the quick poll question! Anthropogenic global warming theory is the idea that human activities that release carbon dioxide are causing the Earth’s temperature to rise drastically. Anthropogenic global warming theory has the following assumptions: 1) Carbon dioxide is the main cause of rising global temperatures 2) The main source of this carbon dioxide is from human activities 3) The temperature rise will be quick and large 4) The temperature rise will cause massive devastation and disaster 5) We must act now to stop the release of carbon dioxide But that is only one side of the story. (click photo to download) The Third Industrial Revolution Master Plan, jointly conceived by Nord-Pas de Calais and the TIR Consulting Group LLC, provides a road map for steering the Region into a new economic era that will spawn the new businesses and employment opportunities of a sustainable 21st century. The TIR Master Plan report is a collaborative effort, bringing together government officials, business leaders, academicians, and civil society organizations from the Region of Nord-Pas de Calais with the TIR Consulting Group's global consulting team. The themes, proposals, and initiatives in the final report reflect the joint efforts of the Region and the TIR Consulting Group LLC. Mr. Rifkin is the President of the TIR Consulting Group LLC which advises national governments, regions, and municipalities on sustainable economic development.

Eco Preservation Society About EPS Osa - Get Involved in EPS Osa - Join EPS Osa The pristine rainforests and the rugged natural beauty of the Osa Peninsula make this region among the most beautiful areas in Costa Rica. Declared ‘one of the most biologically intense places on earth’ by the National Geographic Magazine, the Osa Peninsula along with Drake Bay have today, become the premier ecotourism destination in the county. The Osa Peninsula is a peninsula located in southwestern Costa Rica, in the Puntarenas Province, with the Pacific Ocean to the west and the Golfo Dulce to the east. The peninsula was formed geologically by a faulting system that extends north into California. The peninsula is home to at least half of all species living in Costa Rica.

Pavan Sukhdev Of Markets and Failures| Jan, 2015 The need for a right energy strategy as we enter the new year. What we need in 2014: fewer leaders, more followers | The Guardian | Jan, 2014 Laying out the Building Lines For Your Natural Building « Natural Living School Site Preparation After you select your site, and have a plan and design for your building, then you are ready for site preparation. The first thing to do is make sure you clear the site where the building will be located. This means removal of trees, shrubs, large rocks, stumps, or anything that may be in the way of the construction.