(4) Life in Syntropy. Soil and Satellites Are Telling a New Story About Ancient Civilizations in the Amazon. When Francisco de Orellana, a Spanish conquistador, paddled through the Amazon in 1541, he did not find El Dorado, the fabled kingdom of gold he had been looking for. 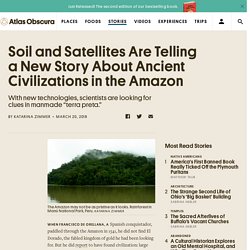 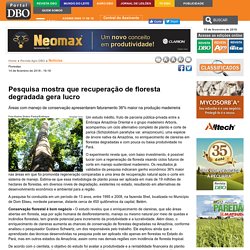 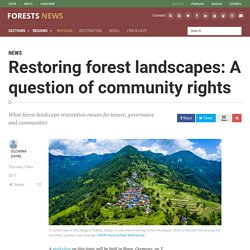 About 30 percent of the Earth’s surface is covered by forests, and around 1.6 billion people depend on them for significant contributions to their environments and livelihoods. Yet, 12 million hectares of intact forests are lost in the tropics every year, either through permanent destruction or degradation. Forest Landscape Restoration, FLR, is one of the newer initiatives to be put forward to help solve the problem. Fertilização da Terra pela Terra. Permaculture: Discovering solutions hidden in nature. Drones sobrevoam e semeiam áreas desmatadas em distância ideal para que brotem novas árvores - The Greenest Post. NOVA: The Hidden Power of Plants. Universo das Plantas - National Geographic. A Vida das Plantas - Documentário dublado. 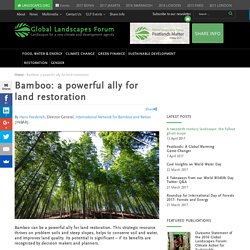 How tree roots respond to drought. Introduction The ongoing climate change is characterized by increased temperatures and altered precipitation patterns. 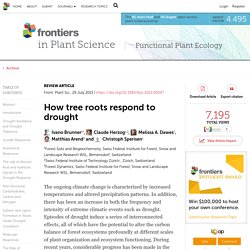 In addition, the frequency, intensity and duration of extreme climatic events, such as droughts, floods, and storms, has increased in recent decades, and a continuation of this trend is predicted (IPCC, 2007, 2014; Cavin et al., 2013). These changes in environmental conditions are affecting terrestrial ecosystems worldwide and have led to a reduction in the global net primary production (Zhao and Running, 2010). Specifically, negative impacts on forest health associated with water limitation are major contributors to forest declines at a global level (Allen et al., 2010; Smith, 2011; Choat et al., 2012; Anderegg et al., 2013b). Drought is a multidimensional environmental constraint that can provoke tree responses from the molecular to the forest stand level (Hamanishi and Campbell, 2011). Video Gallery – Tarwyn Park. Welcome to the Tarwyn Park Video Gallery. 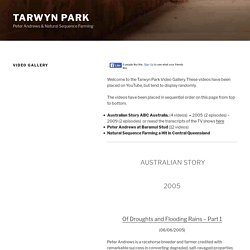 These videos have been placed on YouTube, but tend to display randomly. Peter Andrews - Farming Secrets. Peter Andrews, the veteran horseman who stood dual Melbourne Cup winner Rain Lover, starting off at One Tree Hill in South Australia and then at a new breeding operation he and his wife Ann established on the historic Tarwyn Park in the Bylong valley, NSW has been awarded an Order of Australia Medal (OAM) in the 2011 Australia Day Honours. 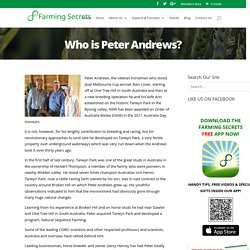 It is not, however, for his lengthy contribution to breeding and racing, but for revolutionary approaches to land care he developed on Tarwyn Park, a very fertile property over underground waterways which was very run down when the Andrews took it over thirty years ago. In the first half of last century, Tarwyn Park was one of the great studs in Australia in the ownership of Herbert Thompson, a member of the family who were pioneers in nearby Widden valley. He stood seven times champion Australian sire Heroic. Tarwyn Park, now a cattle raising farm owned by his son, was in vast contrast to the country around Broken Hill on which Peter Andrews grew up. Right As Rain Part Two - Journeyman Pictures.

Australia faces an unprecendented crisis in the ongoing process of soil erosion. 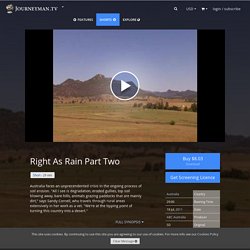 "All I see is degradation, eroded gullies, top soil blowing away, bare hills, animals grazing paddocks that are mainly dirt," says Sandy Cornell, who travels through rural areas extensively in her work as a vet. "We're at the tipping point of turning this country into a desert. " Yet a farmer from New South Wales has developed a way of reviving tracts of the Austrlian landscape. Right As Rain Part One - Journeyman Pictures. For over thirty years, farmer and horse breeder, Peter Andrews, has tried to convince scientists, bureaucrats and politicians of the effectiveness of his innovative landscaping methods  what he calls natural sequence farming  which he has developed in an attempt to counteract drought and erosion. 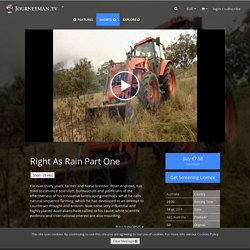 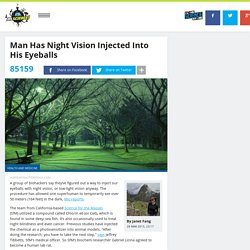 The procedure has allowed one superhuman to temporarily see over 50 meters (164 feet) in the dark, Mic reports. The team from California-based Science for the Masses (SfM) utilized a compound called Chlorin e6 (or Ce6), which is found in some deep-sea fish. It’s also occasionally used to treat night blindness and even cancer. Previous studies have injected the chemical as a photosensitizer into animal models. Mark Mawson: Aqueous Fluoreau. Photographer Mark Mawson has published a wonderful series of fourteen new underwater ink photographs entitled Aqueous Fluoreau. The images are stunning not only for their vibrant colors but their almost sculptural appearance. His previous projects from the same family, Aqueous and Aqueous II are also incredible and worth your time. Curso de bioconstruc3a7c3a3o.

Panfletostodos. Fantastic Fungi, a film about mushrooms by Louie Schwartzberg. Associação para o Retorno das Arvores. Paul Stamets: 6 ways mushrooms can save the world. Do trees have brains? There's increasing evidence to show that trees are able to communicate with each other. Quando a tecnociência vê um pixel mas ignora a paisagem. A agricultura convencional mata o solo. Entrevista especial com Antonio Donato Nobre. Quando a tecnociência vê um pixel mas ignora a paisagem. Edible Landscaping: Organic Gardening And Landscape Design. O chamado das árvores. If Agroecology is So Great, Why Aren’t All Farmers Doing It? : Food First. This post is also published on the Huffington Post here. After a half century of pioneering work by farmers and scientists, agroecology has finally penetrated mainstream policy circles. This is due to agroecology’s widespread success on the ground and the tireless efforts of food activists and policy advocates determined to break corporate agriculture’s chokehold on the politics and the purse strings of our food system.

Yet, 30 percent of the world’s forests are used primarily for the production of wood products. Agroforestry is defined as the integration of trees and shrubs into crop and animal farming systems. These practices can help landowners diversify products and create social, economic, and environmental benefits. Trees and forests provide more than just food—they can enhance soils, protect biodiversity, preserve precious water supplies, and even help reduce the impacts of climate change. Teoria da Trofobiose. Teoria da Trofobiose. Trophobiosis. Trophobiosis is a symbiotic association between organisms where food is obtained or provided. The provider of food in the association is referred to as a trophobiont.