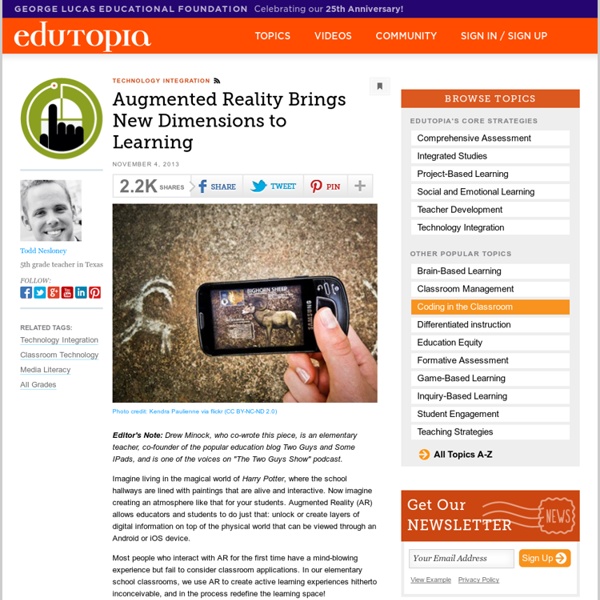 Editor's Note: Drew Minock, who co-wrote this piece, is an elementary teacher, co-founder of the popular education blog Two Guys and Some IPads, and is one of the voices on "The Two Guys Show" podcast. Imagine living in the magical world of Harry Potter, where the school hallways are lined with paintings that are alive and interactive. Now imagine creating an atmosphere like that for your students. Augmented Reality (AR) allows educators and students to do just that: unlock or create layers of digital information on top of the physical world that can be viewed through an Android or iOS device. Most people who interact with AR for the first time have a mind-blowing experience but fail to consider classroom applications. In our elementary school classrooms, we use AR to create active learning experiences hitherto inconceivable, and in the process redefine the learning space! Classroom Applications Not Just Another Fad There are endless ideas and possibilities for using AR.

6 Platforms to Create Augmented Reality When most people first try augmented reality(AR) in education, they start with applications that have the AR content already built into the app. Apps like AR Flashcards, PBS Kids CyberChase Shape Quest, and Crayola Color Alive have this, and are a great way to get your feet wet. As educators, we know the power of creation. Hopefully one of the following 6 platforms will help you and your students dive in to creating your own augmented reality! The first creation platform is from our friends at DAQRI! 4D Studio will allow users to create augmented reality campaigns with no prior coding knowledge, just basic computer skills.

Design Thinking in the Classroom: Free Inspiration from the Ad Award Winners "For students, the best classroom experience is a space of possibility." - Anne Stevens1 Design thinking can transform your classroom into a space of creativity, excitement and possibility. The design thinking process involves rethinking and reframing problems to make things easier, more streamlined or different. Top 10 Websites To Watch Movies Online For Free We all love the idea of watching movies with just your Internet connection and a computer and no strings attached. Although some of you may think that this is not legal, i would say "why not try something ill-legal today". There are lots of websites which provide to watch movies online, no need to sign-up and in few clicks you are into the movie arena. Most of these sites don’t host the files due to legal disputes but they contain links to the sources, where we can get our hands dirty.

Augmented reality in education: teaching tool or passing trend? What some may call an 'unsurprising' 71% of 16 to 24-years-olds own smartphones, so why aren't teachers utilising these in the classroom or campus? Is the use of these devices going to detract from the learning process or contribute to future workplace skills? Should teachers be using techniques such as augmented reality (AR) to engage students and develop their skills for the modern world? 32 Augmented Reality Apps for the Classroom by edshelf: Reviews & recommendations of tools for education Augmented Reality (AR) is a growing field of technology where real life is modified and enhanced by computer-generated sights and sounds. The most common use of AR can be seen through mobile apps. Point your device’s camera at something that the app recognizes, and it will generated a 3D animation or video superimposed over whatever is on your camera’s screen. The effect makes the computer-generated item appear like it’s really there.

The Definition Of The Flipped Classroom The Definition Of The Flipped Classroom As one of the most popular trends in education in recent memory, you’ve undoubtedly heard of the flipped classroom. But what is it about a classroom that’s been flipped that makes it unique? 10 Great Films Influenced by The Cinema of Rainer Werner Fassbinder “Every decent director has only one subject, and finally makes the same film over and over again. My subject is the exploitability of feelings, whoever might be the one exploiting them. It never ends, it’s a permanent theme.

Hi, We are a 1:1 Chromebook school and I am looking for an app or extension that will work with Chromebooks. I sort of want to discourage actual phone use as that is all I have seen AR work with so far. Thanks, by randyhogue Jan 31