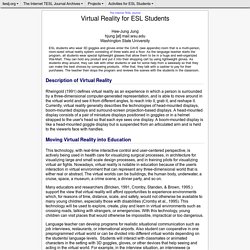 As the language teacher starts the program, all students wear special lightweight glasses that allow them to be in a huge and well-organized Wal-Mart. They can hold any product and put it into their shopping cart by using lightweight gloves. Lessonplanet. Virtual Reality Lesson Plan. ThingLink. Image search for equirectangular. 360° Videos. Augmented and Virtual Reality. How Virtual Reality Is Radically Changing The Travel Industry. Unimersiv - Virtual Reality Educational Experiences. 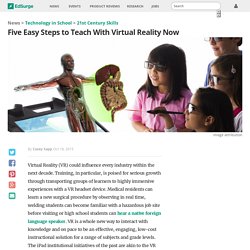 Training, in particular, is poised for serious growth through transporting groups of learners to highly immersive experiences with a VR headset device. Medical residents can learn a new surgical procedure by observing in real time, welding students can become familiar with a hazardous job site before visiting or high school students can hear a native foreign language speaker. VR is a whole new way to interact with knowledge and on pace to be an effective, engaging, low-cost instructional solution for a range of subjects and grade levels.

The iPad institutional initiatives of the past are akin to the VR headset initiatives of the future. One Laptop per Child could soon be one Mattel View-Master per child. In the emerging discipline of VR instruction and curriculum development, there is currently no source to turn to for implementing best practices or classroom standards. The best educational VR apps for the Google Cardboard. Virtual Reality - Effective Curriculum Ideas. Learning Just Became Fun Thanks To Unimersiv and Virtual Reality. Getting Real? Google Cardboard And Virtual Reality In Education – The Edublogger. While we may not have flying cars, hover boards that really hover (and don’t catch fire), or teleporters just yet, the past year has seen the launch of at least one future-age technology we’ve awaited for decades: virtual reality. 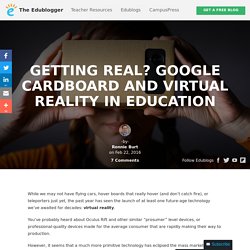 You’ve probably heard about Oculus Rift and other similar “prosumer” level devices, or professional-quality devices made for the average consumer that are rapidly making their way to production. However, it seems that a much more primitive technology has eclipsed the mass market: simple pieces of cardboard. Cardboard. Cardboard puts virtual reality on your smartphone. 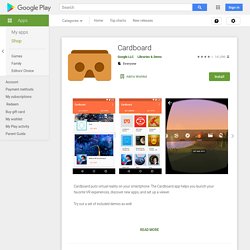 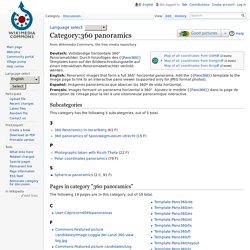 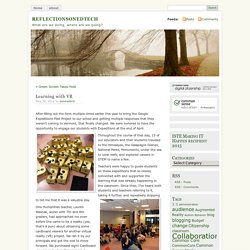 We were honored to have the opportunity to engage our students with Expeditions at the end of April. Throughout the course of that day, 15 of our educators and their students traveled to the Himalayas, the Galapagos Islands, National Parks, Monuments, under the sea to coral reefs, and explored careers in STEM to name a few. Teachers were happy to guide students on these expeditions that so closely connected with and supported the learning that was already happening in the classroom. Since then, I’ve heard both students and teachers referring to it, taking it further, and repeatedly stopping to tell me that it was a valuable day. 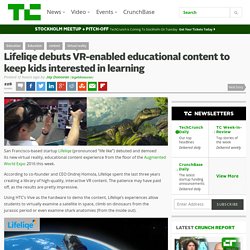 According to co-founder and CEO Ondrej Homola, Lifeliqe spent the last three years creating a library of high-quality, interactive VR content. The patience may have paid off, as the results are pretty impressive. Using HTC’s Vive as the hardware to demo the content, Lifeliqe’s experiences allow students to virtually examine a satellite in space, climb on dinosaurs from the jurassic period or even examine shark anatomies (from the inside out). This new VR capability will join the company’s existing, eponymous, tablet product that is already in use with over 15,000 schools across the globe (mostly in Europe).

The tablet content is also compelling and fun to use (see below) although not as immersive as their VR counterparts. Uk.businessinsider. Melia Robinson Sitting at a picnic table outside The Treehouse, a cheap grub spot on the Stanford University campus, seven students chow down while passing around a futuristic-looking headset. 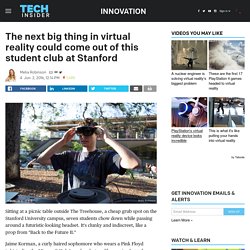 It's clunky and indiscreet, like a prop from "Back to the Future II. " Jaime Korman, a curly haired sophomore who wears a Pink Floyd t-shirt, slips the Microsoft HoloLens headset on like a pair of sunglasses. Top 10 virtual worlds for kids - Virtual Reality. A large percentage of virtual world users are in their teens followed by the 16 to 25 age group. 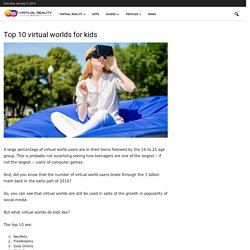 This is probably not surprising seeing how teenagers are one of the largest – if not the largest – users of computer games. And, did you know that the number of virtual world users broke through the 1 billion mark back in the early part of 2010? So, you can see that virtual worlds are still be used in spite of the growth in popularity of social media. How Virtual Reality is Being Used in Museums. While a trip to the museum might have sounded like a bore many years ago, today’s museums are interactive environments that encourage engaging with the material and bring history to life. 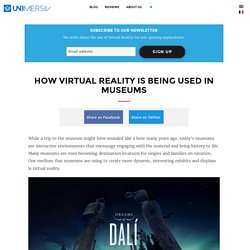 Many museums are even becoming destination locations for singles and families on vacation. DIY: Build your own Google Cardboard VR viewer. Editor's note: We are highlighting this story for readers who might want to build their own Cardboard reader to follow the New York Times' launch of its NYT VR app. At the 2014 Google I/O developer's conference last June, the tech giant made a splash by handing out kits containing, of all things, pre-cut pieces of cardboard along with a pair of lenses, some magnets and a few other parts. The best Google Cardboard VR apps. ThingLink Summer VR Challenge. VR Videos. 360° Images for Schools. Google Cardboard for Education – Communauté – Google+

Google Spotlight Stories. 20 Best Augmented Reality Apps - Play. Enjoy. Learn. Virtual Reality vs Augmented Reality Virtual reality, or VR, has a reputation for being for hardcore gamers. You know: the serious tech heads who don’t think it’s at all strange to sit in a room with a giant set of black goggles over their eyes and interact with people, places, and things that don’t actually exist. For the rest of us, there’s probably a healthy curiosity about VR, but it’s not to the point where we’re willing to spend a few hundred pounds on a serious piece of equipment. Augmented reality, or AR, on the other hand, combines reality (or real reality, since the word “reality” on its own need some qualification here) with virtual reality.

It’s not only a more approachable solution for the majority of people who don’t want to have two of their five senses completely cut off from (real) reality, but it’s more accessible, since all you need is your smartphone. The category of AR apps has been quickly growing over the past few years. 1. 10 Best iOS Virtual Reality Apps For Google Cardboard. The tech world’s latest infatuation is virtual reality (VR), and this is given even greater importance with the arrival of Facebook’s Oculus Rift, and Microsoft’s upcoming HoloLens.

If you are not content with the real world, then come this way ladies and gents, and step into a fantasy world instead. These headsets come with a warning of dizziness, sickness and eye strain if you use them for too long. They’re also pretty expensive, and require powerful gaming PCs to run.