Post Haste - Digital Rebellion. "I firmly believe that every editor should have Post Haste in their arsenal. 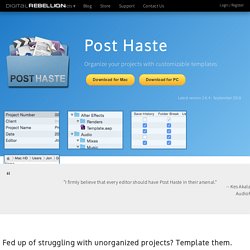 " -- Kes Akalaonu,AudioMicro Fed up of struggling with unorganized projects? Template them. Editing 360 and VR Video. Understand the essential terms, concepts and technology for VRLearn VR’s post-production pipeline in Premiere and FCPXDoes VR narrative filmmaking have a future? 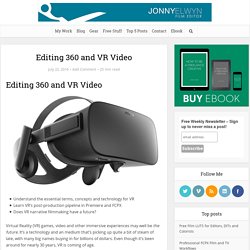 Virtual Reality (VR) games, video and other immersive experiences may well be the future. It’s a technology and an medium that’s picking up quite a bit of steam of late, with many big names buying in for billions of dollars. Even though it’s been around for nearly 30 years, VR is coming of age. This post should give you a pretty good schooling in the fundamentals of VR and 360 video, the various concepts you need to understand and some valuable resources to help you dive deeper into the topic if you wish. I’m not going to cover the cameras much at all, this is a post production blog after all, but you’ll get a flavour of that side of things from some of the talks anyway. 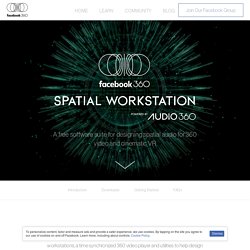 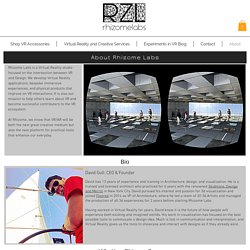 SkyBox Studio. About – QubaVR. Born in Poland, in 1976, Quba Michalski is a Creative Director, Motion Artist, Filmmaker, Problem Solver and Creative Thinker with over two decades of experience in various disciplines of design. 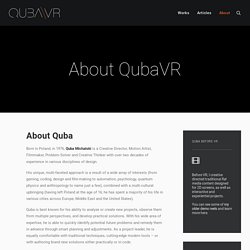 His unique, multi-faceted approach is a result of a wide array of interests (from gaming, coding, design and film-making to automation, psychology, quantum physics and anthropology to name just a few), combined with a multi-cultural upbringing (having left Poland at the age of 16, he has spent a majority of his life in various cities across Europe, Middle East and the United States). Quba is best known for his ability to analyze or create new projects, observe them from multiple perspectives, and develop practical solutions. With his wide area of expertise, he is able to quickly identify potential future problems and remedy them in advance through smart planning and adjustments. 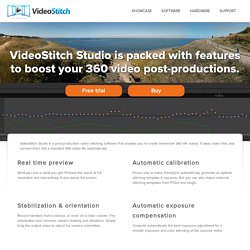 It takes video files and convert them into a standard 360 video file automatically. Real time preview What you see is what you get. Preview the result at full resolution and interactively. It also works full-screen. Tilt Brush by Google. New Video Metrics: Understand the Audience and Engagement of Your Facebook Videos. By Anaid Gomez-Ortigoza, Product Manager All kinds of publishers post video on Facebook to engage, inform, and entertain people. 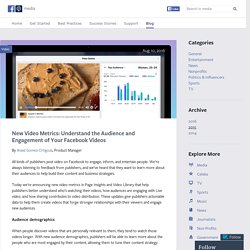 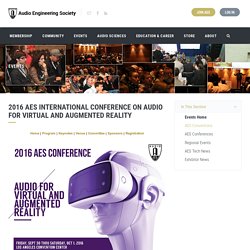 The two-day Conference, companion workshops, tutorials and manufacturer’s expo will throw a unique focus on the creative and technical challenges of providing immersive audio to accompany virtual-reality and augmented-reality media, which is demonstrably the fastest-growing community within the entertainment-audio markets. It is intended to attract researchers, developers and creatives from a broad spectrum of complementary application fields, ranging from government, defense, scientific and geographic exploration to health & medicine, education, tourism and entertainment. New Video Metrics: Understand the Audience and Engagement of Your Facebook Videos. Facebook’s 360 video Guide and Heatmap can steer or track where you look. Facebook has to train people how to make great video if it wants it “at the heart” of its services like Mark Zuckerberg promised, so today it launched a slew of new video analytics. 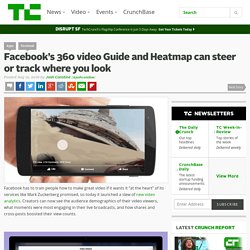 Creators can now see the audience demographics of their video viewers, what moments were most engaging in their live broadcasts, and how shares and cross-posts boosted their view counts. video-insights-hero-updated Facebook introduces new Audience Demographics, Viewer Engagement With Live Video, and Video Viewing From Shares And Cross-Posts analytics views-video-insights location-video-insights audience-video-insights engage-select-insights updatedvideoengagement But more interesting is the pioneering work Facebook is doing around bringing narrative to the 360 video experience. In the 250,000 360 videos uploaded to Facebook so far, viewers always had to choose for themselves where to look, but creators couldn’t tell what angles were the most eye-catching.

Two new features fix that. Hospitals Try Giving Patients a Dose of VR. When Deona Duke woke up from a medically-induced coma to begin recovering from burns that covered almost a third of her body, one of her treatments was hurling snowballs at penguins. 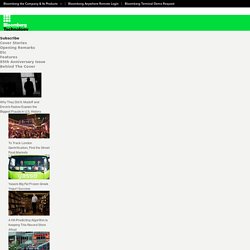 The 13-year-old was set on fire when a bonfire exploded on her and her friend. To prevent infection, burn victims need their bandages changed and dead skin scraped away. Sometimes, even morphine isn’t enough to make that tolerable. At the Shriners Hospital for Children in Galveston, Duke’s doctors gave her a virtual reality headset. Videoblocks. Vuze Camera - 3D 360 camera and Virtual Reality Kit. HumanEyes - Homepage. Viv. Scheller College Uses Virtual Reality to Reach MBA Prospects Across the U.S. Georgia Tech’s Scheller College of Business is recruiting prospective students with more than just a brochure this year – they are using technology to transport MBA seekers to their Atlanta campus.

Potential students are taking part in a virtual reality experience at MBA tour events in cities across the country including Seattle, San Francisco, Houston, New York City, Chicago, Boston, and Washington D.C., among others, with the help of some Georgia Tech alumni. Scheller College is one of the early adopters within the business school community to use virtual reality to connect with their audience for recruitment. So far, Scheller's recruiters have seen a 28 percent increase in table visits at fairs from last year and deeper engagement on social media. “The Scheller College is preparing business leaders who are innovative and can leverage technology in a global setting,” said Maryam Alavi, dean of Scheller College of Business.

“The response to VR has been amazing. Transcendence Through Virtual Reality. Mindshow. Immersv: Mobile VR Ad Network - Virtual Reality App Network. Sp360 accesories en. Kifi export. Home. Nvidia is one of my favorite picks to outperform in the semiconductor space in the next year. This is mostly driven by the adoption of the VR headset, which will drive ASPs in the enthusiast gaming category on healthy volumes.

While there are other areas that show substantial promise, the gaming segment alone is the crown jewel of Nvidia. Nvidia's Pascal family of GPUs is set to unlock replacement demand in the 2016 timeframe. Labeling Nvidia's graphics cards "green blocks of gold" would be an understatement, and the smart money is already piling into the trade - best of luck to the bulls. Nvidia (NASDAQ:NVDA) presents a lot more upside than I had originally anticipated. However, before explaining the key trends in growth, I want to mention that the business has transitioned itself away from PC OEMs, and is better positioned to generate growth today, as PC users have become far more savvy and are electing to upgrade their own PCs by installing graphics cards into their own systems.

Rothenberg Ventures. UploadVR - Virtual Reality News. Samsung's foldable smartphone pops up in new patent. Stay Connected with Us! Follow TechnoBuffalo Rumor has it Samsung is gearing up to release its first foldable smartphone, codenamed “Project Valley,” early next year. It may sound like science fiction, but a recent patent from the South Korean company spotted by Patently Mobile reveals how Samsung could pull it off. The theoretical design combines Samsung’s flexible OLED technology with a new hinge setup.

There’s also a pair of springs on either side of the hinge to power the entire system. It looks like a pretty practical concept, though we’re still not sure why anyone would actually want a foldable smartphone. The North Face: Climb – Aplikacje Android w Google Play. Experience the thrill of rock climbing and base jumping alongside premier outdoor athletes in this stunning 360-degree 3D VR film. Join The North Face climbers Cedar Wright and Sam Elias at two iconic American outdoor locations - Moab, Utah and Yosemite National Park in California. This cinematic virtual reality outdoor adventure film will transport you to a new perspective on these amazing natural wonders.​ Content — Jaunt.

It will ship in November in time for Black Friday. Compared to the $199 previous Gear VRs that only worked with fewer phones, this headset will be a lot more accessible. The new Gear VR is 22% lighter, making it more comfortable to wear. The trackpad on the temple of the headset also now has a tactile directional pad on it so your finger will know where it’s touching. There’s also a new Gear VR Gamepad which all the Oculus Connect conference attendees will get for free. While many are highly anticipating the flagship Oculus Rift headset release, the fact that it needs to be wired to an expensive gaming computer means it will have a much more niche audience. High Fidelity. Emergent. AltspaceVR Inc. Augmented Reality Can Increase Productivity - The AREA. Technological and cultural shifts that result in enhancements in manufacturing tend to increase complexity in products and processes.

In turn, this complexity increases requirements in manufacturing and puts added pressure on organizations to squeeze out inefficiencies and lower costs where and when feasible. Virtual Reality Applications Center. Kaleidoscope Festival. The Real Jurassic Park — The Coffeelicious. Emily: On its face, the story of The Ark looks like one about preservation, but you also intend to explore technology and wealth in the parallel stories of researchers in Africa and California. RICOH THETA. Kodak Digital Cameras. IC Real Tech - security technology innovator. Giroptic 360° Experts - 360Cam - Up. Down. All around. Bubl Technology Inc. The First 360-Degree Interactive Videos Have Arrived on YouTube. Virtual reality is posed to become one of the next big things in the tech world, and YouTube is preparing itself for that future. VRLA. The Proto Awards. Taking the Long-view: The VR Future Starts in 2016.

In the second of a new regular series of reports, Noah Nelson looks at virtual reality’s rocky road ahead as the VR industry grapples with the unenviable task of convincing a cynical world, beyond the enthusiasts, that virtual reality is here, it’s going to work and that it really matters. Noah Nelson (@noahjnelson) is the head writer of Turnstyle News, a public media website that covers tech and entertainment, and a project of the Peabody Award winning Youth Radio. The Proto Awards are coming up next week. The Future of Virtual Reality Is Inside Your Smartphone. The first time I ever believed virtual reality might really be the future was at CES 2013, in a parking lot outside of the Las Vegas Convention Center.

A virtual gallery restores the world's stolen art to the public - Kill Screen - Videogame Arts & Culture. Virtual reality has always been about shortening the distance between the not-possible and the possible, or at least the reasonable and the unreasonable. After all, you wouldn’t don a pair of clunky black goggles (or a helmet) so that you can see what it feels like to go to the grocery store (uh…). Virtual reality has captured the world’s attention for its ability to plop us down in the middle of places that, until this point in history, we could only look at from afar. Now, we want to fly, to get chased by aliens, or to snoop around in the Batcave. Virtual reality may be coming to the courtroom. Most people do not want to be picked for jury duty. Augmented And Virtual Reality To Hit $150 Billion, Disrupting Mobile By 2020. The World's largest Augmented and Virtual Reality Conference.

Chris Milk: How virtual reality can create the ultimate empathy machine. Virtual reality sex is coming — and the toys are already here. Note: The following post contains sexually graphic images and descriptions. You’re lying back on a bed. You look around. A porn star walks in. This edtech startup is bringing virtual reality to the classroom. Microsoft HoloLens, Round 2: Why Can't I See More Of This Amazing Shit? An Out-of-Body VR Experience - VRScout. How to Design for Virtual Reality — Backchannel. Virtual surgery gets real. Future of Virtual Reality Series Launches Today. Is It Really So Bad If We Prefer Virtual Reality to Reality? Market Research for the VR Industry. Should You Buy the Hype? An Inside Look at the Virtual Reality Landscape.

How Can Virtual Reality Improve the Quality of Life for People Around the World? A Maker’s Guide to the Metaverse. Infographic-landscape-vr-augmented-reality-devices-immersis-lab.