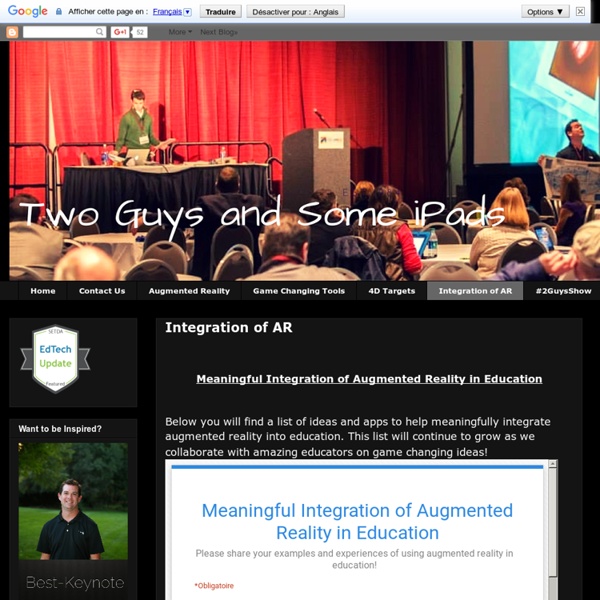 Meaningful Integration of Augmented Reality in Education Below you will find a list of ideas and apps to help meaningfully integrate augmented reality into education. This list will continue to grow as we collaborate with amazing educators on game changing ideas! Homework Mini-Lessons: Grade Level: All grades We use Explain Everything for many activities in our classrooms. Grade Level: PK-2, ELL This app uses augmented reality to engage the students in learning their letters. Grade Level: K-3 This fun app uses augmented reality to engage students in solving addition and subtraction problems. Student created book reviews: Grade Level: All grades Students can create short video book reviews of the book they have read from the classroom library or school library. Faculty Photo Wall Personalize your school's entryway by hanging a photograph of each staff member. PTA Support/Recruiting Rubrics Grade: All Learning Targets: Exit Slips/Tickets Words of Encouragement Mystery Reader or Staff Members Yearbook!

Augmented Reality AR Circuits - Augmented Reality Electric Circuit Kit With the AR Circuits app students can build and test simple realistic circuits using augmented reality technology. The app allows you to build circuits without the expense, safety concerns, and inconveniences associated with physical electric components. The circuits are designed by arranging printed paper component cards. Augmented Reality Explained by Common Craft (VIDEO) I think we can all agree that reality is pretty great. It’s what we experience through our senses like our eyes, and phones with cameras. The Internet is awesome too, but the Internet and reality have a hard time working together. Thankfully this is changing quickly. New tools mean that the world around you can now be seen with a layer of new information from the Internet. Let's start with an example.

How Augmented Reality (AR) Can Be Great for Math Class: Learning Goals Photo by turkletom / CC BY As you may be aware from some of my recent Tweets, I had the pleasure of presenting at the EdTechTeacher iPad Summit – Boston over the past few days. Overall, it was one of the best professional development experiences I have had the pleasure of taking part in. There were so many great sessions that I hope to blog about soon, but I think I’ll start with the session that gave me inspiration to implement the idea in my own classroom immediately upon returning home. Spectral Learning – Augmented Reality from A to Z – Why AR is the Next Big Game Changer in Ed Tech Facilitator: Courtney Pepe

Augmented Reality Is Going Mobile 21st Century Curriculum | April 2013 Digital Edition Augmented Reality Is Going Mobile--and Coming to a Classroom Near You By Jennifer Demski04/23/13 Among the many technologies poised to reshape the way we communicate and interact with the world around us, few evoke the same sense of excitement and curiosity as augmented reality. Adjusting Course Click on the picture above to download the complete PDF for the Phases of AR in Education. If you’re seeking meaningful ways to enhance the student learning experience using Augmented Reality (AR) you’ve come to the right place! Please share your ideas in the comments section below. To see the actual Augmented Reality content on this page you may need to double-click on the trigger images below to enlarge them.

Getting Started with Virtual Reality: Building for Google Cardboard This is part 2 of our series introducing Makers to Virtual reality. If you haven’t already seen it, you should go check out: An Introduction To Unity. The Google Cardboard headset is the perfect and inexpensive way to get started with virtual reality for anyone who owns a smartphone. Mainstream companies are already helping get headsets into the hands of the public like wildfire. The New York Times recently sent out more than a million Google Cardboard headsets to its subscribers, bringing VR to a whole new audience. Your Smarticles: More Aurasma-Tazz for your Classroom The Aurasma app puts the power of augmented reality into your hands. One can simply amaze their students armed with only a smart device, the FREE aurasma app, and trigger images. For basic information and a general overview of Aurasma, see: Aurasma-tazz. In a previous posting I provided a general overview of the app and gave some samples. Below are some actual student Aurasma samples for you to try AND two video tutorials demonstrating the app AND providing a step by step lesson on how to do this yourself!!

Augmented Reality Using Aurasma I definitely think like a kid when it comes to technology- it has to be fun or I don’t really want anything to do with it. Maybe that’s why I LOOOVE Augmented Reality (AR) and the Aurasma app. Similar to the way a mobile device scans a QR code and links to a website, AR lets you see something not there in reality except when viewed through the mobile device. Video Tutorials for Teachers on Using Augmented Reality App Aurasma July 3, 2014 Talking about augmented reality technology in teaching and learning the first thing that comes to mind is this wonderful app called Aurasma. Since its release a few years ago, Aurasma gained so much in popularity and several teachers have already embraced it within their classrooms. For those of you who are not yet familiar with how Aurasma works and how to use in it in your class, the video tutorials below will help you out. Aurasma is an augmented reality app that’s changing the way millions of people see and interact with the world. Bring tagged images, objects and even physical locations to life with interactive digital content, such as video, animations and 3D scenes ( called Auras).

Exploring Augmented Reality with Vuforia and Unity It has always been a dream of mine to play with the holograms from Star Wars. While that dream may still be a long ways down the line, there is some supplemental hope for my space fantasy. A company called Qualcomm has released a technology called Vuforia, which among many other applications, can help you play with a concept called augmented reality. Augmented reality is different from entirely virtual reality, which is another type of digital experience that is often lumped together with augmented reality. The primary difference is that virtual reality, or VR, is immersive and places you inside an entirely new world trying its very best to remove you from the physical world. Augmented reality, or AR, does not do this.

Bring your classroom to life with Augmented Reality Augmented Reality (AR) has become a real "hot topic" in education recently. If you're not familiar with it, we describe AR as making a static image come to life - just like the posters from Harry Potter. It might sound crazy, but it really exists. Tons of Classroom Examples Using Augmented Reality with @Aurasma - A Complete How-To Guide! How to Use Augmented Reality in Your Classroomthis post is read best via a desktop due to the embedded video content Augmented reality allows someone to add another layer to an existing image. For example, imagine holding your phone over a poster on the wall as if you were going to take a photo of that poster, and then instantly a video starts playing to offer you additional information about that particular poster. Pretty cool, right? The first time it happens, it seems like magic. After watching the video below, I knew I had to figure this augmented reality thing out.