"The City of God will also be sacked." --Cyclonopedia 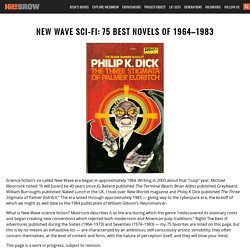 Writing in 2003 about that “cusp” year, Michael Moorcock noted: “It will [soon] be 40 years since JG Ballard published The Terminal Beach, Brian Aldiss published Greybeard, William Burroughs published Naked Lunch in the UK, I took over New Worlds magazine and Philip K Dick published The Three Stigmata of Palmer Eldritch.” The era lasted through approximately 1983 — giving way to the cyberpunk era, the kickoff of which we might as well date to the 1984 publication of William Gibson’s Neuromancer. What is New Wave science fiction? Moorcock describes it as the era during which the genre “rediscovered its visionary roots and began creating new conventions which rejected both modernism and American pulp traditions.” Right! This page is a work in progress, subject to revision. Please visit the HiLoBooks homepage; you’ll find Amazon links for all of our Radium Age series.

Žižek on OOO. The core of object-ori­ented-onto­logy (ooo) developed by Levi Bry­ant1 can be summed up by the for­mula from sub­ject back to sub­stance. 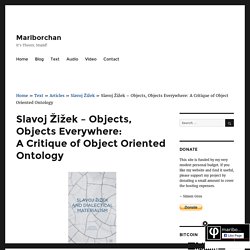 And, in so far as sub­ject is cor­rel­at­ive with mod­ern­ity (recall Lacan’s thesis about the Cartesian sub­ject as the sub­ject of mod­ern sci­ence), we can also say that ooo fol­lows the premise rendered by the title of Bruno Latour’s fam­ous book, We Were Never Modern—it endeavors to bring back the pre­mod­ern enchant­ment of the world. The Lacanian answer to this should be a para­phrase of his cor­rec­tion of the for­mula “god is dead” (god was always already dead, he just didn’t know it): we were always already mod­ern (we just didn’t know it). We must show why thought, far from exper­i­en­cing its intrinsic lim­its through facti­city, exper­i­ences rather its know­ledge of the abso­lute through facti­city. [N]o object ever actu­al­izes the sub­ter­ranean vol­canic core with which its vir­tual proper being is haunted. Notes. The Three Suns. Al Nevins, guitar (Born Albert Tepper 1915, Washington, DC; Died 25 January 1965, New York City, NY) Morty Nevins, accordion (Born Morton Tepper 26 May 1917, Washington, DC; Died 20 July 1990, Beverly Hills, California) Artie Dunn, organ (Born 14 March 1922, Dorchester, Massachussetts; Died 15 January 1996, Palm Springs, California) Reputed to be Mamie Eisenhower's favorite group, the Three Suns are the leading small group in exotica.

Amazon is starting to get some cds: – graywyvern

Brothers Al and Morty grew up in Brooklyn, where they joined with their cousin, Artie Dunn, as a trio, Al switching from violin to guitar to pick up more gigs. 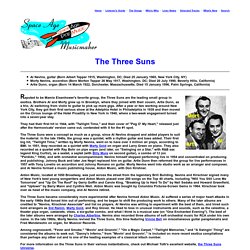 After a year or two working around New York City, they got their first serious show at the Adelphia Hotel in Philadelphia in 1939 and then moved on the Circus lounge of the Hotel Picadilly in New York in 1940, where a two-week engagement turned into a seven-year stay. The Time of the Seedbearers. Myths, according to the philosopher Sallust, are things that never happened but always are. 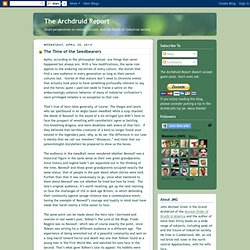 With a few modifications, the same rule applies to the enduring narratives of every culture, the stories that find a new audience in every generation as long as their parent cultures last. Stories of that stature don’t need to chronicle events that actually took place to have something profoundly relevant to say, and the heroic quest I used last week to frame a satire on the embarrassingly unheroic behavior of many of industrial civilization’s more privileged inmates is no exception to that rule. That’s true of hero tales generally, of course. Fearing poem: green light. All things are possible : Shestov, Lev, 1866-1938. To the ecotopians. Thirty-five years later, it was still on my bookshelf in a little section on utopias (as well it should have been, being a modern classic). 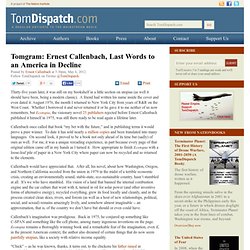 A friend had written his name inside the cover and even dated it: August 1976, the month I returned to New York City from years of R&R on the West Coast. Whether I borrowed it and never returned it or he gave it to me neither of us now remembers, but Ecotopia, the visionary novel 25 publishers rejected before Ernest Callenbach published it himself in 1975, was still there ready to be read again a lifetime later. Callenbach once called that book “my bet with the future,” and in publishing terms it would prove a pure winner. To date it has sold nearly a million copies and been translated into many languages. On second look, it proved to be a book not only ahead of its time but (sadly) of ours as well. Callenbach would have appreciated that.

Callenbach’s imagination was prodigious. Liber juratus online. This done, in the middle of the circles, namely in the center, make a pentagram thus: 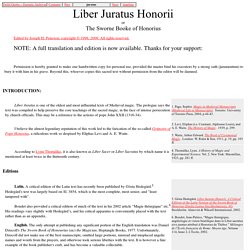