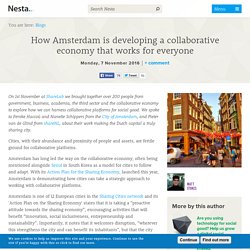 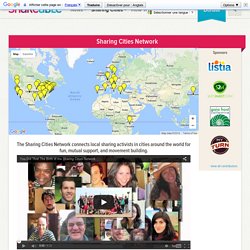 What is the Sharing Cities Network? Imagine a city where everyone’s needs are met because people make the personal choice to share. Where everyone can create meaningful livelihoods. Where fresh, local food is available to all. Seeing a sustainable future - Alex Steffen. Mark Carney: most fossil fuel reserves can't be burned. The governor of the Bank of England has reiterated his warning that fossil fuel companies cannot burn all of their reserves if the world is to avoid catastrophic climate change, and called for investors to consider the long-term impacts of their decisions. 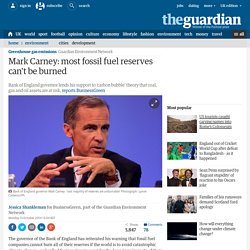 According to reports, Carney told a World Bank seminar on integrated reporting on Friday that the “vast majority of reserves are unburnable” if global temperature rises are to be limited to below 2C. Carney is the latest high profile figure to lend his weight to the “carbon bubble” theory, which warns that fossil fuel assets, such as coal, oil and gas, could be significantly devalued if a global deal to tackle climate change is reached.

The movement has gained traction in recent weeks, with the World Bank leading an initiative with 73 national governments, 11 regional governments, and more than 1,000 businesses and investors to build support for a global price on carbon emissions during the United Nations climate summit in New York. Mark Carney: most fossil fuel reserves can't be burned. BIVOUAC. Asian Cairns by Vincent Callebaut. MVRDV-designed markthal housing + market hall opens in rotterdam. Wooden skyscrapers could be the future of flat-pack cities around the world. When American engineer William Le Baron Jenney designed the world’s first skyscraper in Chicago in 1884, no one believed in his unconventional technologies. 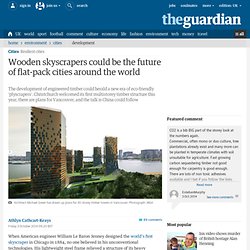 His lightweight steel frame relieved a structure of its heavy masonry shackles, enabling it to soar to new heights. Perplexed by this trade-in of solid brick for a spindly steel skeleton, Chicago inspectors paused the construction of the Home Insurance Building until they were certain it was structurally sound. Of course, Jenney’s revolutionary edifice provided a blueprint for city skylines across the world. By 2011, China was reckoned to be topping off a new skyscraper (500ft or taller) every five days, reaching a total of 800 by 2016. Toronto, now North America’s fourth largest city, currently has 130 high-rise construction projects under way.

Food City - CJ Lim. In Food City, a companion piece to Smartcities and Eco-Warriors, innovative architect and urban designer CJ Lim explores the issue of urban transformation and how the creation, storage and distribution of food has been and can again become a construct for the practice of everyday life. 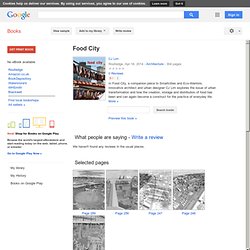 Food City investigates the reinstatement of food at the core of national and local governance -- how it can be a driver to restructure employment, education, transport, tax, health, culture, communities, and the justice system, re-evaluating how the city functions as a spatial and political entity. Global in scope, Food City first addresses the frameworks of over 25 international cities through the medium of food and how the city is governed. Hong Kong protesters use a mesh network to organise - tech - 30 September 2014. 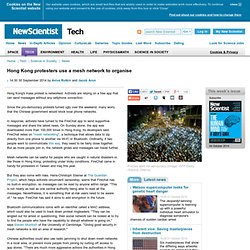 Activists are relying on a free app that can send messages without any cellphone connection. Since the pro-democracy protests turned ugly over the weekend, many worry that the Chinese government would block local phone networks. In response, activists have turned to the FireChat app to send supportive messages and share the latest news. On Sunday alone, the app was downloaded more than 100,000 times in Hong Kong, its developers said. FireChat relies on "mesh networking", a technique that allows data to zip directly from one phone to another via Wi-Fi or Bluetooth. Megacity China: the ultimate in urban migration. Joanna Carver, reporter (Image: Wu Hong/EPA/Corbis) NO, YOU haven't slipped into a dream within a dream within a dream. 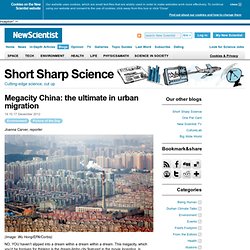 This megacity, which you'd be forgiven for thinking is the dream-limbo city featured in the movie Inception, is Qingdao. It won the accolade of being China's most liveable city in 2009 and 2011. City Visions. Flood Wall Street: Photos from the Front Lines. Your source for green design & living news, commentary and advice. Skinny micro-housing designs lets you live between buildings. Video production company run out of modern green garden shed in London. The shedworking movement has never really caught on in North America like it has in the UK, and perhaps the reasons can be most clearly seen in this interesting shed shown recently on Alex Johnson's site Shedworking., built by Green Studios in South London. 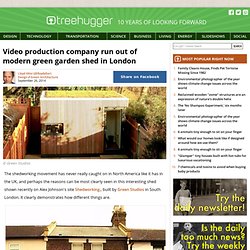