Tourist cities in Belgium. Urbantech Startups and the Cities of the Future. By Shaun Abrahamson People are moving to cities at an unprecedented rate. 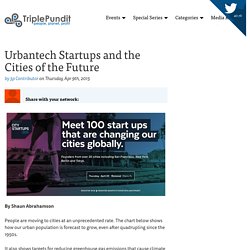 The chart below shows how our urban population is forecast to grow, even after quadrupling since the 1950s. It also shows targets for reducing greenhouse gas emissions that cause climate change (specifically targets set by the European Union for greenhouse gas emissions). Since cities currently account for about 75 percent of greenhouse gas emissions, if we cannot change how we build and operate cities, we have little hope of achieving our climate goals. Simply put: We need cities to be smart if they are to serve the needs or more people, even as they must shrink emissions.

What is a smart city? Smart city has come to mean something quite specific — technology that is sold to local government agencies to enable them to better deliver services. Over the last 18 months, Urban.Us researched hundreds of startups and created a radar plot of their solutions — who they sell to and what city problems they solve. Urban.Us. Lagoon System Corp. City%20of%20the%20Future%20FINAL%20WEB. Issues in Science and Technology. A rich blend of engaging narrative and rigorous analysis can provide decisionmakers with the various perspectives they need when making choices with long-range consequences for cities around the world. 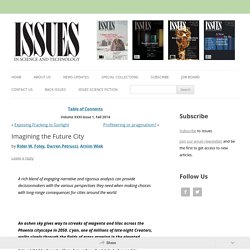 An ashen sky gives way to streaks of magenta and lilac across the Phoenix cityscape in 2050. L’yan, one of millions of late-night Creators, walks slowly through the fields of grass growing in the elevated honeycomb transportation network on her way back from the late-night block party. L’yan has only a short trip to her pad in downtown Phoenix. She, along with 10,000,000 fellow Creators, has just beaten the challenge posted on the PATHWAY (Privileged Access-The Hacker WAY) challenge board. L’yan shivers, a cool breeze and the feeling of success washing over her. Science fiction uses personal narratives and vivid images to create immersive experiences for the audience. Constructing scenarios A mixed method to foresight Each student dedicated 60 or more hours per week to the project. R. The Future Is Cities. Cities around the world are growing faster than you can say megalopolis. 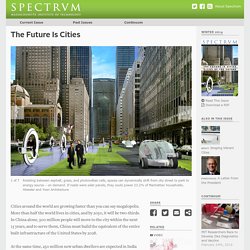 More than half the world lives in cities, and by 2050, it will be two-thirds. In China alone, 300 million people will move to the city within the next 15 years, and to serve them, China must build the equivalent of the entire built infrastructure of the United States by 2028. At the same time, 250 million new urban dwellers are expected in India and 380 million in Africa. Even though cities will soon account for 90 percent of population growth, 80 percent of global CO2, and 75 percent of energy consumption, more and more, it’s where people want to live.

Why? Dozens of MIT faculty are now working to figure it out, and there is no easy fix. The shift is towards interdependence and sharing. “Privacy is Already Gone” The American Dream is focused on ownership, and since World War II, Americans have wanted to own their own houses and cars because it signals success. “The younger generation is already sharing,” says Prof. Future of cities. Cities matter to the UK. 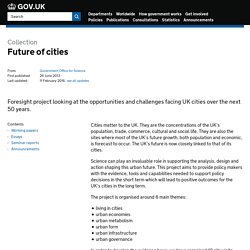 They are the concentrations of the UK’s population, trade, commerce, cultural and social life. They are also the sites where most of the UK’s future growth, both population and economic, is forecast to occur. The UK’s future is now closely linked to that of its cities. Science can play an invaluable role in supporting the analysis, design and action shaping this urban future.

This project aims to provide policy makers with the evidence, tools and capabilities needed to support policy decisions in the short term which will lead to positive outcomes for the UK’s cities in the long term. The project is organised around 6 main themes: living in cities urban economies urban metabolism urban form urban infrastructure urban governance In order to develop the evidence base, we have organised 19 city visits, seed-funded a number of local city projects, and commissioned a series of working papers, essays and blogs.