50 Ideas for the New City 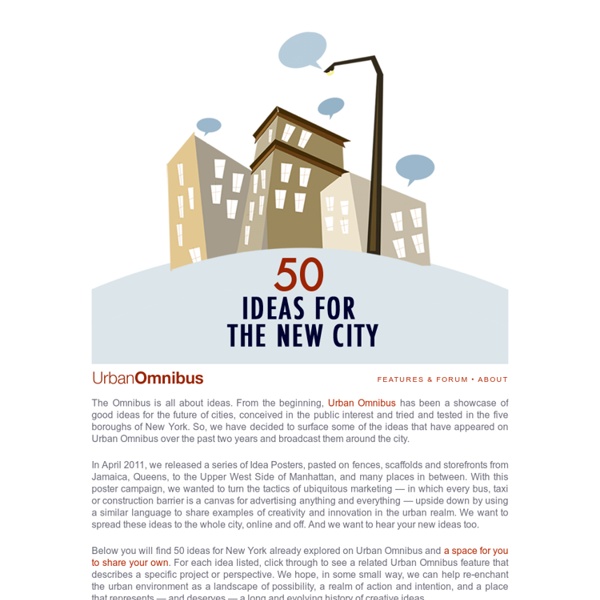 The Omnibus is all about ideas. From the beginning, Urban Omnibus has been a showcase of good ideas for the future of cities, conceived in the public interest and tried and tested in the five boroughs of New York. So, we have decided to surface some of the ideas that have appeared on Urban Omnibus over the past two years and broadcast them around the city. In April 2011, we released a series of Idea Posters, pasted on fences, scaffolds and storefronts from Jamaica, Queens, to the Upper West Side of Manhattan, and many places in between. With this poster campaign, we wanted to turn the tactics of ubiquitous marketing — in which every bus, taxi or construction barrier is a canvas for advertising anything and everything — upside down by using a similar language to share examples of creativity and innovation in the urban realm. We want to spread these ideas to the whole city, online and off.

Grime-fighting garments aim to purify air Polymer chemist Tony Ryan and fashion designer Helen Storey have joined forces to create clothing which can purify the air. Catalytic Clothing contains the same nanotechnology found in self-cleaning paints and glasses but applies it to clothes via a special fabric conditioner. A catalyst -- titanium dioxide -- applied during a normal home washing cycle breaks down harmful airborne pollutants when exposed to ultraviolet light.

Gothic Architecture Pictures All text and pictures © QT Luong. See conditions for use of pictures. There are 28 pictures on this page out of 228 pictures of Gothic Architecture. The city of 2050 Sensor networks Experts predict that everything, from street furniture to roads to the homes we live in, will be connected to the network. All these objects will produce vast amounts of data and some cities may build Nasa-style control centres to make predictions about city life, including where crimes may be committed. Smart buildings Buildings will have taken on a life of their own, controlling heating, lighting and security with little human intervention. Architects envisage buildings becoming far more sustainable, producing their own power and reusing rain water. Can motors in wheels spark electric car revolution? There may have been more alluring electric cars on display at this year's Tokyo Motor Show, but the beauty of this prototype lies in its performance. The SIM-LEI can travel 333 kilometers (more than 200 miles) on a single charge, say its Japanese creators SIM Drive, and it also boasts supercar-like acceleration -- 0 to 60 mph in just 4.8 seconds. The key to these remarkable statistics lies not, as you might expect, underneath the hood but in its wheels. Most electric vehicles house a single motor in the area vacated by the petrol engine, but the SIM-LEI has four motors, which fit in the hubs its wheels. Each one delivers 65 kilowatts, giving the car a total output of 260 kilowatts, compared with the 80 kilowatts of output available in, say, the Nissan Leaf. A 24.5 kWh battery sits below the floor along with inverters and controllers, which fit into a unique steel monocoque helping reduce weight, according to SIM Drive.

Opencities Open Cities challenges are designed around four themes: open data, crowdsourcing, urban labs and fiber-to-the-home. The challenges are open for individuals and organizations and aim to foster the development of products and services based on the platforms provided by the participating cities. The Innovation Challenge Share your ideas and win! The Open cities project calls for developers to collaboratively brainstorm in our Open Data Forum about these two Open Data problems: >read more Open Cities app challenge

Sustainable Architectural Design by German Architects Like this article? Share it: “Modular,” “sustainable” and “transportable” – these are three words used to describe this sustainable architectural design from Germany’s Studio Aisslinger. The Fincube is a low-energy house characterized by its horizontal slats of locally grown timber enclosing a transparent, glass wall structure.

What Would Real Democracy Look Like? Rather than aiming for yet another change of politicians and parties in power, why not aim for a change of the political system itself? As representative democracy sinks into crisis, we need to go back to democracy in its original meaning as rule of the people. It is time to imagine what real democracy would look like and to create institutions and mechanisms that could be the building blocks of genuinely democratic societies.

40 Witty Campaign Posters for a Cause Non-profit organizations use posters to deliver a particular message. These help inform people about current issues, problems and even the possible consequences of their actions. With a sentence that contains strong words or images, these posters give more impact than common commercial posters. About Hi. I’m Chris Messina and this is my blog. I maintain a current bio as well. I live and work in San Francisco on the Diso Project with Steve Ivy , Will Norris , and Stephen Paul Weber , among others . I run Citizen Agency , a consulting company focused on the effective and appropriate use of social media combined with open source values and practices. I maintain a gallery of screenshots of interfaces , representing my interest in user interaction and interface design.

10 Cool Engineering Tricks the Romans Taught Us" Roman engineering was mostly synonymous with military engineering. Those roads that they're so famous for weren't built so much for day-to-day use (though they were, of course, useful for that) as for marching legions quickly into the countryside, hitting trouble spots and getting out again. Roman-designed pontoon bridges, constructed mostly during wartime for the shock and awe of quick raids, served the same purpose and were a specialty of Julius Caesar's. In 55 B.C., he built a pontoon bridge that was around 437 yards (400 meters) long to cross the Rhine river, which was traditionally thought by the Germanic tribes to be safely out of reach of Roman power. Caesar's Rhine bridge was clever for a couple of reasons.

High school fashions, 1969 Fashion, Vintage High school fashions, 1969 i know what you’re thinking… are these more fashion snaps from coachella? Towards a low-carbon future — SETIS The Information System for the European Strategic Energy Technology Plan (SET-Plan) The European Strategic Energy Technology (SET)-Plan aims to transform energy production and use in the EU with the goal of achieving EU worldwide leadership in the production of energy technological solutions capable of delivering EU 2020 and 2050 targets. The move towards a low-carbon Europe requires innovative research, effective strategic planning and an emphasis on timely and appropriate action.