How to create a 3D Bluray. Making Metallic Prints - Digital Photo Magazine. It used to be that if you wanted to print on metal you’d have to make a tintype or, even earlier, go see Louis Daguerre. 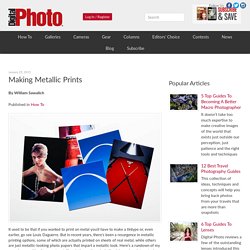 But in recent years, there’s been a resurgence in metallic printing options, some of which are actually printed on sheets of real metal, while others are just metallic-looking photo papers that impart a metallic look. Here’s a rundown of my experiences with a few great metallic printing options, including lab-made prints, actual metal prints and even inkjet paper options for making home prints with a metallic appearance. – Lab-printed metallic papers.

My first stop for a metallic print was to call on one of the big national print houses that make it easy to order prints remotely. You know the ones: Bay Photo, Adorama, Mpix. . – Lab printed on real metal. . – Inkjet printing on metallic paper. Amazon.co. Product Description The brand new Silver Metallic Paper from PermaJet! 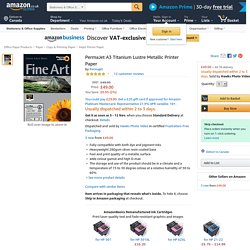 - Titanium Lustre has a beautiful pronounced textured finish on a heavyweight 280gsm silver resin coated base. This new photo paper truly resembles the look, feel and print quality of a metallic surface with its high silver pigment content - this is NOT one of the much less impressive 'pearlescent' papers on the market which is simply an 'effect' on the coating - the base of Titanium really does look like silver!! 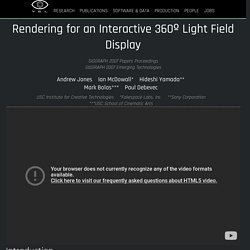 The display is: autostereoscopic - requires no special viewing glasses omnidirectional - generates simultaneous views accomodating large numbers of viewers interactive - can update content at 200Hz The system works by projecting high-speed video onto a rapidly spinning mirror. As the mirror turns, it reflects a different and accurate image to each potential viewer. Our rendering algorithm can recreate both virtual and real scenes with correct occlusion, horizontal and vertical perspective, and shading. While flat electronic displays represent a majority of user experiences, it is important to realize that flat surfaces represent only a small portion of our physical world. This surface spins synchronously relative to the images being displayed by the projector. Paul Debevec’s new Light Field Research. 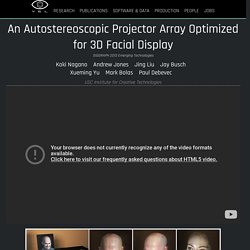 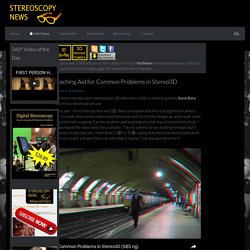 Feel free to download and use. Karel said: "I first show the first shot (①) 'Raw' and explain that this is straight from camera, but I've made some minor vertical and horizontal shifts to line the images up, and a small zoom in to eliminate cropping. Can the students spot anything else that may still need correcting? I pause/repeat the video while they consider. The errors. Digital Cinema Package - Part 3: Creating Your DCP in OpenDCP. Luxonline Histories: 1952. Festival of Britain. 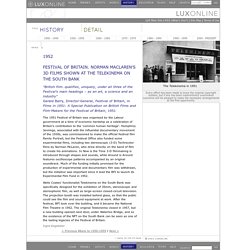 Norman Maclaren's 3D films shown at the Telekinema on the South Bank "British film…qualifies, uniquely, under all three of the Festival's main headings – as an art, a science and an industry" Gerald Barry, Director-General, Festival of Britain, in Films in 1951: A Special Publication on British Films and Film-Makers for the Festival of Britain, 1951 The 1951 Festival of Britain was organised by the Labour government at a time of economic hardship as a celebration of Britain's contribution to the 'common human heritage'.

Humphrey Jennings, associated with the influential documentary movement of the 1930s, was commissioned to make the official festival film Family Portrait, but the Festival Office also funded some experimental films, including two stereoscopic (3-D) Technicolor films by Norman McLaren, who drew directly on the band of film to create his animations. Ariston and on and on and Ariston. Sun tests &lsquo;sickly&rsquo; Nintendo 3DS. NINTENDO’S 3DS is now the most returned games console ever as users struggle with its display. 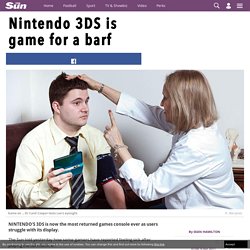 The Sun told yesterday how some gamers have reported feeling sick after playing the 3D machine. So we tested the device with our man Lee Price, 22. After Sun doctor Carol Cooper measured his resting blood pressure as 120/70, and pulse as 67, Lee played Street Fighter and Pro Evolution Soccer in four 30-minute slots. He took the advised ten minute break between games — and here we chart his progress: THIRTY MINS: Blood pressure 127/72, pulse 66. ONE HOUR: Blood Pressure 130/74, pulse 69. Vergence-Accommodation Conflict: Why Bad 3D Literally Makes You Sick. Vergence-Accommodation Conflict: Why Bad 3D Literally Makes You Sick If watching 3D content has given you a headache or even made you nauseous, you’re not alone. 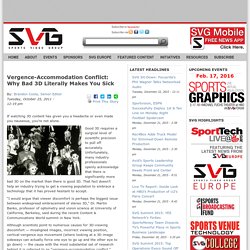 Good 3D requires a surgical level of scientific precision to pull off accurately. Unfortunately, many industry professionals openly acknowledge that there is significantly more bad 3D on the market than there is good 3D. That fact doesn’t help an industry trying to get a viewing population to embrace a technology that it has proved hesitant to accept. “I would argue that viewer discomfort is perhaps the biggest issue between widespread embracement of stereo 3D,” Dr. According to Banks, a person looking at the world through two eyes has to make two kinds of responses with those eyes. Visual fatigue and vergence accommodation conflict in 3D. Untitled. SouthWest VR Conference, Bristol, UK. Creating Stereoscopic Fractals. I can help people to create true stereoscopic fractal images using Maneldbulb3D and StereoPhoto Maker. 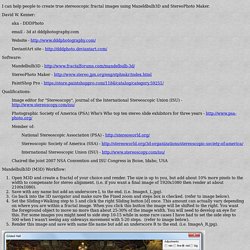 David W. The Misunderstanding of 3-D. For the second time in as many years, an auteur’s descent into 3-D livened up the Cannes Film Festival. 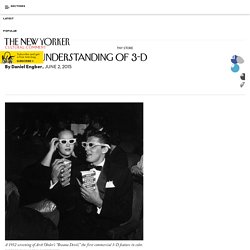 If you would like to present your presentation at the convention, download the Theatre form for the instructions. Submission deadline is June 15. How to make a DCP (Digital Cinema Package) on your own computer. When it comes down to projecting your film for the big screen, the DCP is quickly becoming an industry standard. But how can you get your film in this format and most importantly – can you do it on your own computer? Up until now the words Digital Cinema Package (DCP) had usually been followed by many pound (or other currency) signs.

Numbers like £10k, £30k and £50k+ were being used. My initial reaction…? We are all doomed, there’s no way I’m getting my short films shown at high resolution on the big screen.Enter, OpenDCP and the modern age of Indie distribution. PUBLIC 47: 3D Cinema and Beyond by PUBLIC Journal: Art Culture Ideas. » 47: 3D Cinema and Beyond Public Journal. | Spring 2013 | Edited by Dan Adler, Janine Marchessault and Sanja Obradovic This issue brings together essays and artist portfolios that engage with mainstream entertainment, experimental film and historical scholarship as part of a larger context for examining the grammar of 3D cinema — its histories and its futures. From cinema and television to video games and augmented reality, the essays consider an “expanded field” of stereoscopic visual culture. Contributors explore obsolescent and emerging technologies, singular and trend setting practices, narrative and documentary approaches, and the overall perceptual experiences of 3D media.

This groundbreaking collection includes Sergei Eisenstein’s extraordinary 1947 essay “On Stereocinema” translated for the first time in its entirety; a landmark address by Wim Wenders; and the last essay written by 3D pioneer researcher Ray Zone. Introduction, Dan Adler, Janine Marchessault and Sanja Obradovic. » 47: 3D Cinema and Beyond Public Journal. Creating A Feature Film DCP Using OpenDCP. Hover over links like this for technical explanations In December 2011 I wrote about using a MacBook Pro as a playout source for the cast and crew screening of the feature film McLean’s Money. Idiots guide to OpenDCP. The basics are fairly simple. I just went through a 24fps 2K trailer edit that needed to be released for our upcoming stereoscopic animated feature. A couple of things to keep in mind: The DCI compliant aspect ratios for 2K are:2048x858 SCOPE1998x1080 FLAT24FPS If you're releasing to theater chains, they are VERY picky about compliance ... especially the naming convention.

Creating a 2K DCP from HD - WicusLabWicusLab. Golden Age 3-D - 3dfilmarchive. More information on the anaglyph shorts released in 1953 can be found in Golden Age Anaglyph Releases 3-D movies had sporadic exposure in the decade following the release of REVENGE OF THE CREATURE. Hague TCM Twin Camera Tripod Mount — Hague Camera Supports. Introduction to RE:Match Color. Introduction to RE:Match Stereo. Microsoft Windows on Devices – Raspberry Pi 2. We’re excited to announce that we are expanding our Windows Developer Program for IoT by delivering a version of Windows 10 that supports Raspberry Pi 2. This release of Windows 10 will be free for the Maker community through the Windows Developer Program for IoT. Windows 10 is the first step to an era of more personal computing. This vision framed our work on Windows 10, where we are moving Windows to a world that is more mobile, natural and grounded in trust. With the Windows for IoT developer program we're bringing our leading development tools, services and ecosystem to the Raspberry Pi community!

We see the Maker community as an amazing source of innovation for smart, connected devices that represent the very foundation for the next wave of computing, and we’re excited to be a part of this community. Virtual Reality, The Empathy Machine. I am standing on a street in Syria when the bomb goes off. Stereoscopic Displays and Applications conference - 3D Theatre Session. 15. This Web App Easily Turns Your Selfies Into 3D Models. Golem: inside the weird and wonderful new production from theatre group 1927. It is almost impossible to impart in words the magic of a 1927 show. A thrilling combination of animation, live performance, theatre and music, it is multimedia in the true sense of the word, but with none of the slightly clinical nuance that word implies.

Where is my title page? 3D University. International 3D Society. How to Shoot High Frame Rate 3D. Posted in 3D Shorts "Later, in the restaurant... " is a 1-minute stereoscopic 3D short that was presented at the Beyond 3D Symposium in Karlsruhe, Germany. Watch the 3D version here under. Later, in the restaurant… (3D Version) This video is in stereoscopic 3D 720p format. If you are unable to watch it properly, download the short and play it with StereoscopicPlayer (current version is 2.3.0). Making Found Footage 3D. With knowing irony, the filmmakers behind the new independent horror feature Found Footage 3D, call their movie “the Scream of the found footage genre,” and it’s part of the point they’re making.