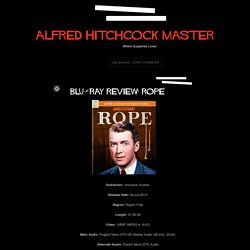 “…I abandoned pure cinema in an effort to make the stage play mobile. One cannot blame Alfred Hitchcock for feeling experimental after being under contract to David O. In a Popular Photography article that was published in November of 1948, the director explains his reasoning behind shooting the film in long uninterrupted takes: “A long time ago I said that I would like to film in two hours a fictional story that actually happens in two hours. After Effects 2017 - How to remove unwanted people or objects in DRONE Footage. How to Create the ‘2001’ Slit Scanning Effect with Digital Tools.

This hands-on guide shows you how to distort your images like Kubrick. 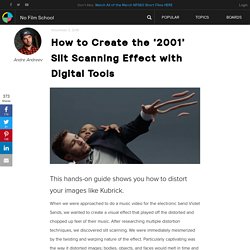 When we were approached to do a music video for the electronic band Violet Sands, we wanted to create a visual effect that played off the distorted and chopped up feel of their music. After researching multiple distortion techniques, we discovered slit scanning. We were immediately mesmerized by the twisting and warping nature of the effect. Particularly captivating was the way it distorted images; bodies, objects, and faces would melt in time and become abstract liquid forms. In contrast to other distortion effects like pixel moshing, slit scanning remains very organic and that might have to do with its origins. The best digital technique to generate a slit scan-like effect is time displacement in Adobe AE. Likewise, pixels in the layer that correspond to dark areas in the displacement map are replaced by pixels at a specified number of seconds backward in time.

Follow Focus Gears. (23) The Making of 'Terminator 2: Judgment Day' Behind The Scenes. Why I Choose To Shoot ProRes Raw with the FS5. Alister Chapman by alister1 - Shapeways Shops. Amazing Micro Cinematography of Mold And How To Build Your Own Macro Bellows. Andrei Tarkovsky, Solaris and Stalker. Cinematography Lessons. Anamorphic on a Budget – TFerradans. You can support this project on Patreon. 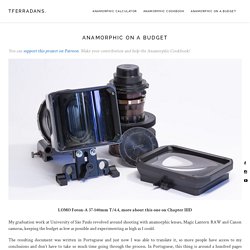 Make your contribution and help the Anamorphic Cookbook! LOMO Foton-A 37-140mm T/4.4, more about this one on Chapter IIID My graduation work at University of São Paulo revolved around shooting with anamorphic lenses, Magic Lantern RAW and Canon cameras, keeping the budget as low as possible and experimenting as high as I could. HSC Camera Guide - Slow Motion. Untitled.

Article reproduced with kind permission from the online rental marketplace ShareGrid As a cinematographer who owns lenses designed for various formats, I am often asked "will this lens work with my camera? 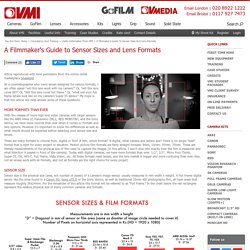 " Or, "will this lens cover 8K? " Or, "Will this lens cover full frame. " Or, "what will your full frame lenses look like on my camera's Super-35 sensor. " My hope is that this article will help answer some of those questions. With the release of more high-end video cameras with larger sensors like the ARRI Alexa LF, Panavision DXL2, RED MONSTRO, and the Sony Venice, we have more choices than ever when it comes to formats and lens options.

There are many formats to choose from. digital or film? Sensor size is the physical size (area, not number of pixels) of a camera’s image sensor, usually measured in mm width x height. For film, resolution is the term used to describe how much detail can be resolved usually measured in line pairs (lines per mm or lines per inch). 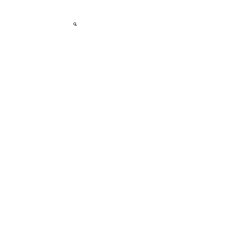 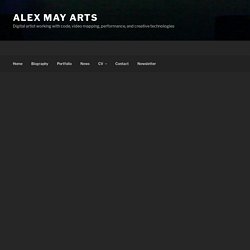 Continuing his core interests of light, code, and time, Alex is creating a new body of photographic prints and video works using source material filmed around the world on his many travels. The works are made by taking a video (anything from three seconds to three hours) and algorithmically combining the data contained in each frame down to a single resulting image. The source video is filmed at 25 frames per second, so a three hour video contains 270,000 images. CALL BOX 62 62 – Southern California (detail) Girl in Heidelberg (detail)

Behind the scenes with David Lynch on ‘Eraserhead’ David Lynch and Jack Nance on the set of ‘Eraserhead’ I was reading a review of the new season of Twin Peaks in The New York Review of Books and came across an absolutely hilarious line about David Lynch I hadn’t seen before. 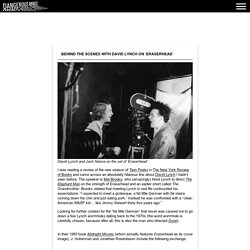 The speaker is Mel Brooks, who (amazingly) hired Lynch to direct The Elephant Man on the strength of Eraserhead and an earlier short called The Grandmother. Flashback: The Thing - The American Society of Cinematographers. Dean Cundey ASC discusses the making of director John Carpenter’s 1982 sci-fi horror classic. 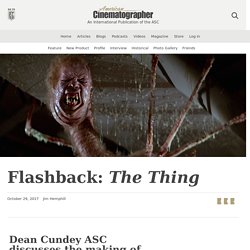 INTRODUCTION — By Rob Hardy, BSC There have been a few pivotal moments that informed my approach to cinematography and to filmmaking as a whole, certain influences that have inspired me along this beautiful road: 1) My introduction to the world of Stanley Kubrick, 2) Discovering the challenging and peerless work of the writer J.G Ballard, and 3) Hearing the extraordinary way in which anarchic genius Steve Albini masterfully records sound. How Automatik VFX pulled off a zombie apocalypse on budget. Horror aficionados often roll their eyes at the mention of a new zombie movie, knowing that, for every "Dawn of the Dead" or "28 Days Later," there are ten clunky, derivative films more dead on arrival than their zombie characters. 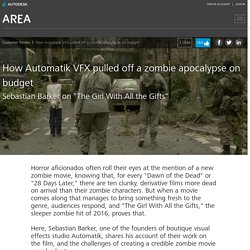 But when a movie comes along that manages to bring something fresh to the genre, audiences respond, and "The Girl With All the Gifts," the sleeper zombie hit of 2016, proves that. Here, Sebastian Barker, one of the founders of boutique visual effects studio Automatik, shares his account of their work on the film, and the challenges of creating a credible zombie movie on a budget.

Our New Favorite Tripod Is Actually the Most Affordable We Tested. Normally, you get what you pay for. 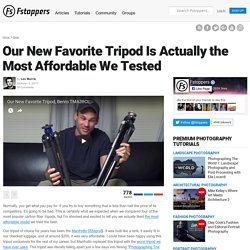 If you try to buy something that is less than half the price of its competitors, it's going to be bad. This is certainly what we expected when we compared four of the most popular carbon fiber tripods, but I'm shocked and excited to tell you we actually liked the most affordable model we tried the best. Our tripod of choice for years has been the Manfrotto 055xproB. It was built like a tank, it easily fit in our checked luggage, and at around $250, it was very affordable. Benro TMA38CL Long Series 3 Mach3 Carbon Fiber Tripod TMA38CL. This Interactive Map Shows You Current Drone Laws in Every Country in the World. If you need up-to-date information about the drone regulations in your country, this map will be a lifesaver. No one likes having to traipse around official government websites to try and dig up (and understand) documents that tell you whether or not it's legal for you to fly a drone in a given area.

No one likes it, but it has to be done because it's obviously important to respect the laws of the land. Flashback: Saving Private Ryan (1998) - The American Society of Cinematographers. Opening with the most graphic and elaborate film depiction of D-Day to date, the $65 million Private Ryan uses this monumental event as a springboard for its story. Loosely based upon actual WWII cases of families losing four or five sons in battle, the picture follows Captain John Miller (Tom Hanks) as he leads an eight-man squad behind enemy lines and into France to search for the last surviving Ryan brother (Matt Damon), whose three siblings have been reported killed in action.

Boot camp “We didn't have to shoot much in terms of makeup tests,” says Kaminski with a wry laugh. Sony FS5 Picture Profile Settings. Dear FS5 owners. I spend some time to develop a picture profile setting. I stored the profile in PP6. How DP Christian Sprenger Embraced Imperfections on FX's 'Atlanta' The shooter lensed Donald Glover's new FX series with an eye toward simplicity and truth. The day cinematographer Christian Sprenger found out about Donald Glover’s new show Atlanta, he was working on the set of a Wendy's commercial. “I remember getting the phone call while I was with my gaffer Cody Jacobs. My agent soft-pitched it to me and I was like, 'holy shit that sounds incredible.' When I came home and read the script, it exceeded my initial excitement.” A Complete Guide to Setting Up a Home Color Grading Suite. This is a guest post by Cinematographer Ryan E.

Walters. As Moore's Law continues to make technology more accessible to the masses, it is time to start exploring what it takes to build your own grading suite at home or in your office. Before reading the rest of this post, I recommend that you check out How To Get The Most Out Of CS6, DaVinci, & Your Mac Pro, as this article continues to build on what I've outlined.

How to Calibrate a Monitor. Having a color balanced monitor may not seem all that important especially if you’re in a rush to get the shots you need, but having a color balanced monitor while you’re shooting can save you hours of post production work and even improve the quality of your finished production. FS5 RAW Shooting Tips. Go Medieval With These Easy-to-Make Fantasy Props. Top image via Shutterstock. Additional images via UglyMcGregor unless noted. It’s been a long while since Game of Thrones was simply a television series. ART OF THE CUT with Thelma Schoonmaker on Silence. by Steve Hullfish - ProVideo Coalition. Sony PXW-FS5 - Light Meter Rating FS Raw Prores. Lens Rentals. Rokinon 24mm f/1.4 ED AS UMC Review. Astrophotography 101: A Lesson Series on Photographing the Milky Way. Rytech: Why I Bought and Returned the SLR Magic Anamorphot: A Review. For the past five years or so I've been quite interested in shooting anamorphic.

Pixel Motion – Stop Motion Technique – Digital Anthill. Drift from mustardcuffins on Vimeo. I came across the following video the other week and was amazed by the effect mustardcuffins had created. Every Filmmaking Form You'll Ever Need in 99 Free Templates. CreativeCOW. 20 Best Trailers of the Last 20 Years (1996 – 2016) Typeset In The Future. 7 Expert Digital Imaging Technicians (DITs) Discuss their Role on a Film Set. Sony PXW-FS7K Package 2 With Lens. Lacero. The seismic shift in the world of film festivals. Reel Streets. Making of Mad Max: Fury Road from ACS Victoria with John Seale ACS ASC and David Burr ACS. Indie Film Academy – Ridley Scott and the Making of Alien.

Why Nailing Your Mid Range Will Make Post Production Happy. Even with Cingammas and Log. Syrp Genie Motion Control Time Lapse Device 0030-0001 B&H Photo. $0 in the Bank? No Problem! You Can Still Make Your Own 'Itsy Bitsy Camera Slider' DIY: Build the 'Sun-Blaster', a 1000w LED Adjustable Flashlight for Just $40. Here Are Some Essential Tips & Tricks You Should Know Before You Shoot a Time-Lapse.