What If Tech Companies Owned Your City? Imagine a world where Samsung built and owned your residential building, where "patriotism" defined your allegiance to your preferred cell phone manufacturer, not your country, and bringing a corporate rival's product into your apartment could be grounds for eviction. 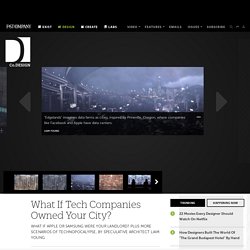 This is one of the bleak urban environments depicted in self-described speculative architect Liam Young's series "New City," a collection of futuristic animations inspired by various scenarios of technopocalypse. For the project, Young's London-based urbanism think tank Tomorrow's Thoughts Today has developed three imaginary, dystopian cities where current trends are satirized and exaggerated to provoke discussion about the impact technology has on our world. These cities are illustrated in panoramic, 4K resolution digital animations, accompanied by short stories written by notable science fiction writers like Jeff Noon, Pat Cadigan, and Tim Maughan.

Samsung City. The future evolution of proprietary cities. We live in the era of urbanization. 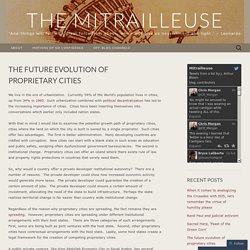 Currently 54% of the World’s population lives in cities, up from 34% in 1960. Such urbanization combined with political decentralization has led to the increasing importance of cities. Cities have been inserting themselves into conversations which earlier only included nation states. With that in mind I would like to examine the potential growth path of proprietary cities, cities where the land on which the city is built is owned by a single proprietor. Such cities offer two advantages. So, why would a country offer a private developer institutional autonomy? Regardless of the reason why proprietary cities are spreading, the fact remains they are spreading. A public private venture, like King Abdullah Economic City in Saudi Arabia, has several advantages. Honduran 'Free Cities' Get One Step Closer to Reality.

Back in January, the new administration of Honduran President Juan Orlando Hernandez was hyping the possibility of what were now officially called Zones for Economic Development and Employment, or ZEDEs. 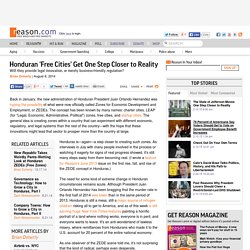 The concept has been known by many names: charter cities, LEAP (for “Legal, Economic, Administrative, Political") zones, free cities, and startup cities. The general idea is creating zones within a country that can experiment with different economic, regulatory, and legal systems than the rest of the country—with the hope that these innovations might lead that sector to prosper more than the country at large. Honduras is—again—a step closer to creating such zones. As interviews in July with many people involved in the process or watching it eagerly for signs of real progress showed, it's still many steps away from them becoming real. (I wrote a feature for Reason’s June 2013 issue on the first rise, fall, and rise of the ZEDE concept in Honduras.) World's Private Cities Yet to Attain Conditions for Success. Introduction to Proprietary Cities : Blog : Foundation for Economic Education.

SEPTEMBER 09, 2014 by MARK LUTTER There has been a lot of discussion about what Tyler Cowen calls shareholder states. 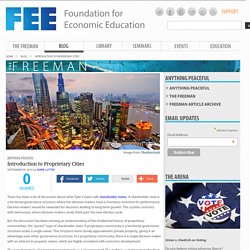 A shareholder state is a territorial governance structure where the decision-makers have a monetary incentive for performance: Decision-makers would be rewarded for decisions leading to long-term growth. Proprietary cities and institutional change - The Calculus of Dissent. Alex Tabarrok has an interesting post on proprietary cities in India. 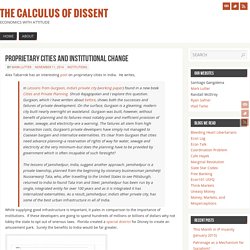 He writes, In Lessons from Gurgaon, India’s private city (working paper) found in a new book Cities and Private Planning Shruti Rajagopolan and I explore this question. Gurgaon, which I have written about before, shows both the successes and failures of private development. In Defense of the Company Town. In my EconTalk with Russ Roberts on proprietary cities I only mentioned company towns in passing. 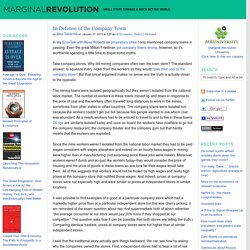 Even the great Milton Friedman got company towns wrong, however, so it’s worthwhile spending a little time to dispel some myths. Take company stores. Why did mining companies often own the town store? The standard answer: to squeeze every nickel from the workers so they would “owe their soul to the company store.” But that lyrical argument makes no sense and the truth is actually closer to the opposite. The mining towns were isolated geographically but they weren’t isolated from the national labor market. Since the mine workers weren’t isolated from the national labor market they had to be paid wages consistent with wages elsewhere and indeed on an hourly basis wages in mining were higher than in manufacturing (not surprising since these jobs were riskier).

I said that the traditional story actually gets things backward. Similar arguments apply to company owned housing. Startup Cities Institute. Should Google Run a City? : Blog : Foundation for Economic Education. NOVEMBER 10, 2014 by MARK LUTTER Filed Under : Innovation Would you want to live in a private city? 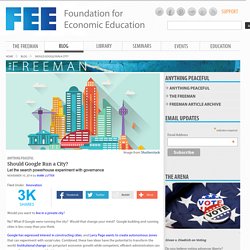 Larry Page wants a Google 2.0 that will build cities and airports, report says. As if self-driving cars, balloon-carried internet, or the eradication of death weren't ambitious enough projects, Google CEO Larry Page has apparently been working behind the scenes to set up even bolder tasks for his company. 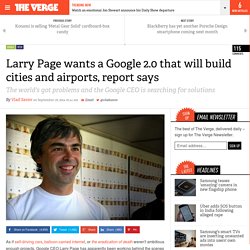 The Information reports that Page started up a Google 2.0 project inside the company a year ago to look at the big challenges facing humanity and the ways Google can overcome them. Among the grand-scale plans discussed were Page's desire to build a more efficient airport as well as a model city. To progress these ideas to fruition, the Google chief has also apparently proposed a second research and development lab, called Google Y, to focus on even longer-term programs that the current Google X, which looks to support future technology and is headed up by his close ally Sergey Brin. None of these ambitions seem to be taking commercial considerations into account, at least not at their outset.