'Solar village' to be opened in Glanrhyd, Pembrokeshire. Why houses in Bermuda have white stepped roofs. Image copyright Alamy The North Atlantic island of Bermuda has no fresh-water springs, rivers or lakes. 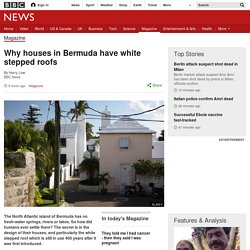 So how did humans ever settle there? The secret is in the design of their houses, and particularly the white stepped roof which is still in use 400 years after it was first introduced. A British visitor to Bermuda will feel instantly at home, even if the weather is far warmer and sunnier than anything imaginable on the British Isles. Many of the island's 60,000 residents live in limestone cottages painted in pastel colours of a design familiar from British towns or villages. But white roofs? Thanks partly to an annual rainfall that far exceeds that of England and Wales, and is spread fairly evenly throughout the year, the tanks are regularly topped up.

This system was forced on the early settlers, because of the lack of easily available fresh water - there are no permanent streams and the lakes are brackish. Lee High Road sinkhole-trapped coach pulled clear. Image copyright Met Police A coach carrying dozens of tourists that became stuck in a sinkhole when a water main burst beneath a London road has been pulled clear. 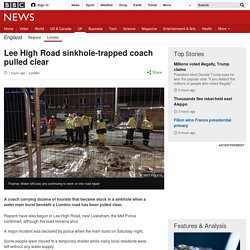 Repairs have also begun in Lee High Road, near Lewisham, the Met Police confirmed, although the road remains shut. A major incident was declared by police when the main burst on Saturday night. Some people were moved to a temporary shelter while many local residents were left without any water supply. Thames Water apologised and said the repairs were "complicated". London Fire Brigade (LFB) said it had assisted 40 tourists from the stranded coach which was carrying 90 people, while 40 local residents had to be evacuated from their homes. A Lewisham Council spokesman said the tourists were later put on another coach to continue their journey without needing to stay the night.

The spokesman for LFB said six fire engines had been sent to the scene, where 50 shops and businesses had been affected. Building a Better City. Why squatter cities are a good thing. An Urbanizing Planet. Superblocks: How Barcelona is taking city streets back from cars. Explicit cookie consent. CARS and motorbikes are banned from the old heart of Hoi An, a pretty tourist town in central Vietnam. 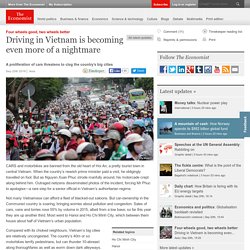 When the country’s newish prime minister paid a visit, he obligingly travelled on foot. But as Nguyen Xuan Phuc strode manfully around, his motorcade crept along behind him. Outraged netizens disseminated photos of the incident, forcing Mr Phuc to apologise—a rare step for a senior official in Vietnam’s authoritarian regime. Not many Vietnamese can afford a fleet of blacked-out saloons. But car-ownership in the Communist country is soaring, bringing worries about pollution and congestion. Compared with its choked neighbours, Vietnam’s big cities are relatively uncongested. The government is conflicted, says Arve Hansen, an academic. The appeal of buying a car may grow even as Vietnam’s roads clog up. New urban rail systems should help.

City officials are making do. Smack in the suburbs. The US is in the throes of a heroin and opioid epidemic - drug overdose has become the leading cause of accidental death, overtaking traffic accidents. 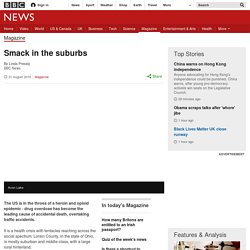 It is a health crisis with tentacles reaching across the social spectrum. Lorain County, in the state of Ohio, is mostly suburban and middle-class, with a large rural hinterland. Its population is only 305,000 but for the last three years, the number of fatal opiate overdoses has hovered at around 65. This year it only took six months to reach that figure. Primary school for all 'not until 2042', says Unesco. Pollution particles 'get into brain' Image copyright ZEPHYR/SCIENCE PHOTO LIBRARY Tiny particles of pollution have been discovered inside samples of brain tissue, according to new research. 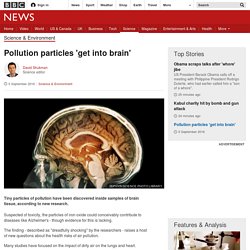 Suspected of toxicity, the particles of iron oxide could conceivably contribute to diseases like Alzheimer's - though evidence for this is lacking. The finding - described as "dreadfully shocking" by the researchers - raises a host of new questions about the health risks of air pollution. Many studies have focused on the impact of dirty air on the lungs and heart.

Now this new research provides the first evidence that minute particles of what is called magnetite, which can be derived from pollution, can find their way into the brain. Earlier this year the World Health Organisation warned that air pollution was leading to as many as three million premature deaths every year. Tracing origins The estimate for the UK is that 50,000 people die every year with conditions linked to polluted air. "It's dreadfully shocking. "It's a discovery finding.