Loescher English Corner 1 - 7 London sightseeing _with subtitles. Describing Places – Describing a City. Are you able to describe your city? 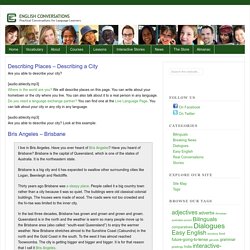 [audio:ablecity.mp3] Where in the world are you? We will describe places on this page. You can write about your hometown or the city where you live. You can also talk about it to a real person in any language. Are you able to describe your city? Bris Angeles – Brisbane I live in Bris Angeles. Look at these place names from the text: Australia Queensland Brisbane Toowoomba Redcliffe Beenleigh Logan Gold Coast Caloundra Sunshine Coast Los Angeles Note that place names are called “proper nouns” and they are written with capital letters. View Where in the World Are You? Los Angelisation Los Angeles is a huge city. Has your city been Los Angelised? Has it grown and grown and grown and swallowed other cities?

Has it been swallowed by another city? Write about your city. Talking about the Ocean Most cities are built on water. Brisbane and the Pacific Ocean To the east of Bris Angeles is the Pacific Ocean. Talking about the Foundation of a City The Founding of Brisbane. Lesson Plan: Cities,Towns and Villages. This is a lesson for Intermediate students (B1). 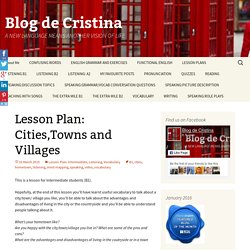 Hopefully, at the end of this lesson you’ll have learnt useful vocabulary to talk about a city/town/ village you like, you’ll be able to talk about the advantages and disadvantages of living in the city or the countryside and you’ll be able to understand people talking about it. These are some common questions in oral exams. Before reading any further, think about how you coud best answer these questions. Try really hard. Imagine you’re taking the real test. Ok! Below you’ll find some ideas to help you get started. Mapa Mental creado con ExamTime por cristina.cabal Now, watch these two short videos and answer the questions below. Video 1. Speaker 1. Speaker 2. Speaker 3. Speaker 4. Speaker 5. Answers here Video 2. Osaka Pass – crossing from Tokushima into Kagawa « Hiking in Southern Japan. By Matt, on January 18th, 2016 Murase Residence – Former Guard House This hike is convenient for those relying upon public transport. 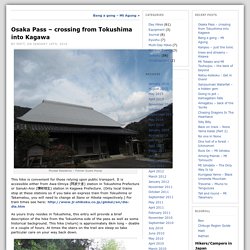 It is accessible either from Awa-Omiya (阿波大宮) station in Tokushima Prefecture or Sanuki-Aioi (讃岐相生) station in Kagawa Prefecture. (Only local trains stop at these stations so if you take an express train from Tokushima or Takamatsu, you will need to change at Itano or Hiketa respectively.) For train times see here: As yours truly resides in Tokushima, this entry will provide a brief description of the hike from the Tokushima side of the pass as well as some historical background. Osaka Pass Trailhead Exiting Awa-Omiya station turn left and head uphill towards the mountains. Forest Heritage Back in the day when Shikoku was four separate ‘countries’ (四国), this narrow road was the main artery from Awa (Tokushima) to Sanuki (Kagawa); kaido translating as ‘highway’, (existing since the Edo Period). From Awa to Sanuki daffodils – minute (of) nature. The 10 Most Unusual Places In America. This Is My City - Episode 6 - Tokyo. This Is My City - Episode 5 - Beijing.

Loescher English Corner 1 - 7 London sightseeing _with subtitles. Learn English 08 - New York. Which City Has The Longest Name. Do you ever dream of traveling around the world? 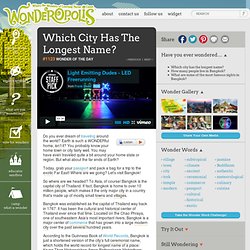 Earth is such a WONDERful home, isn’t it? You probably know your home town or city fairly well. You may have even traveled quite a bit around your home state or region. But what about the far ends of Earth? Today, grab your passport and pack a bag for a trip to the exotic Far East! So where are we headed? Bangkok was established as the capital of Thailand way back in 1767. According to the Guinness Book of World Records, Bangkok is just a shortened version of the city’s full ceremonial name, which holds the world record for longest name of a place: Krung Thep Mahanakhon Amon Rattanakosin Mahinthara Yuthaya Mahadilok Phop Noppharat Ratchathani Burirom Udomratchaniwet Mahasathan Amon Piman Awatan Sathit Sakkathattiya Witsanukam Prasit. If you’re going to Bangkok, you’ll probably want to wear shorts. Another thing that’s hot in Bangkok is the cuisine.