Police called as council meeting hit by protests over Brixton's 'gentrification' Councillors had to be escorted by police out of a planning meeting in Brixton that descended into chaos after activists, local residents, business owners and anti-gentrification protesters reacted in fury to a decision to redevelop railway arches that house independent local businesses. 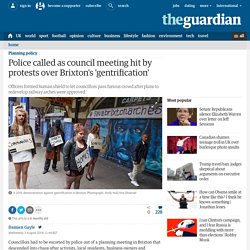 Community activists from the diverse south London neighbourhood stood on tables, threw glitter and declared the “death of Brixton” after the decision was announced on Tuesday. Lambeth council’s planning committee had voted six to one in favour of the scheme, which has become a battleground in the struggle over gentrification in south London, but police were called to intervene after security guards failed to contain the protest.

How has Brixton really changed? The data behind the story. Brixton’s identity has changed enormously over time. 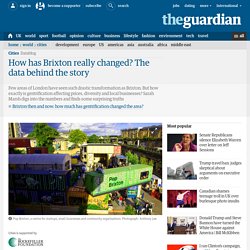 In the 1920s it was south London’s shopping capital. In the 1950s it became home to immigrants from the West Indies. In the 1980s it was made notorious by riots. But today it faces a very different challenge: it is becoming one of London’s trendiest places to live. Some describe the area’s renaissance as regeneration, others say it is simply gentrification, forcing poorer residents out. Has it become unaffordable?

In short, yes, although this is the story across London. The gentrification of Brixton: How did the area's character change so utterly? I met up with a friend recently and we lunched on the first floor of the Ritzy cinema bar in central Brixton in South London. 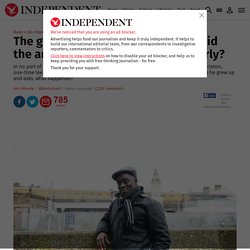 As I placed my order, I remembered that the establishment where I was standing was the place where staff campaigned and went out on strike for a living wage. My seat offered me a view of Windrush Square and the Town Hall building across the road. UK Statistics on Waste statistical notice 25 08 16 update 2. How Curitiba's BRT stations sparked a transport revolution – a history of cities in 50 buildings, day 43. Rua Padre Anchieta, as one of the main thoroughfares in Curitiba, Brazil, is a logical focal point for the city’s bus network. 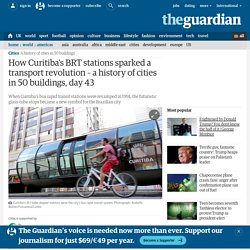 But whereas bus stops in many other cities consist of little more than a sign and perhaps a bench, the ones on Rua Padre Anchieta are a bit different. In the middle of the street sit two tube-shaped stations, raised from ground level and protected from the elements, that open on to two-way express lanes. These lanes are reserved for long orange buses, which zip past slower car traffic and quickly shuttle passengers on and off at the stations on outward-folding ramps. Stations like this now exist throughout the city and metropolitan area. Though difficult to imagine, these distinctive stations that are now the symbol of the city were originally a cost-cutting measure.

Let's get our gentrification story straight. Are we quite sure we’re against gentrification, the urban phenomenon routinely blamed for everything held to be destroying London’s soul, from high housing costs, to corporatised shopping streets, to the pricing out of artists and other creative folk, to the alleged “social cleansing” of the poor? 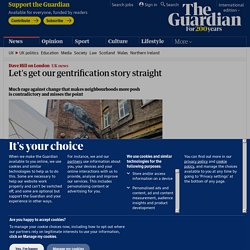 Do we absolutely know that gentrification is to blame for such bad things? Do we really know what we mean by the word? Its most popular deployment is familiar: it disparages the effects of an influx into neighbourhoods “with potential” of newcomers who are wealthier than those already there. Regeneration? What's happening in Sheffield's Park Hill is class cleansing. Park Hill - Ace Geography. Sheffield's Park Hill: the tangled reality of an extraordinary brutalist dream. 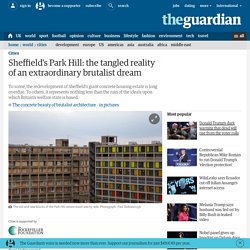 Geography fieldwork. You are here: Home > What is counter-urbanisation? 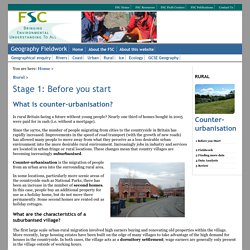 Is rural Britain facing a future without young people? Nearly one third of homes bought in 2005 were paid for in cash (i.e. without a mortgage). Since the 1970s, the number of people migrating from cities to the countryside in Britain has rapidly increased. Improvements in the speed of road transport (with the growth of new roads) has allowed many people to move away from what they perceive as a less desirable urban environment into the more desirable rural environment. Counter-urbanisation is the migration of people from an urban area into the surrounding rural area. 11112701R Final TCA Report EC 2011 02 14 lr 4 Little Chalfont. City growth: When big is not beautiful.

India has 35 cities with million-plus population, with Mumbai leading the pack with a population of about 17 million. 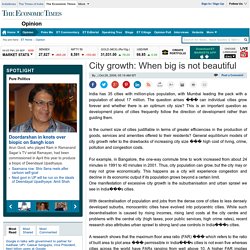 The question arises can individual cities grow forever and whether there is an optimum city size? Commuting Life in Rio. By Martin Kocandrle, Contributing Reporter RIO DE JANEIRO – The trends of population growth and increased urbanization has put serious pressures on the housing market of Rio de Janeiro. 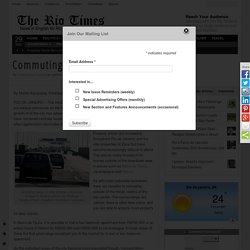 Much of the urban growth of of the city has spread outwards into surrounding areas, while businesses have remained centrally located. The result is cheaper housing on the outskirts, but often nightmarish commutes into the center. Grinding away on the thirteen kilometer bridge to Niteroi, photo by Rodrigo Soldon/Flickr Creative Commons License. Commuting Life in Rio. Inner city v outer suburbs: where you live really does determine what you get.

Joe Hockey recently floated the idea of allowing first home buyers to use their superannuation to pay for a home deposit. 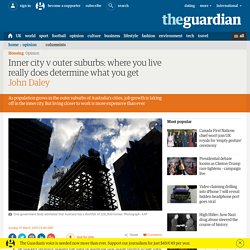 Such a policy would be more likely to increase the price of housing and reduce retirement incomes than solve the problem. But the suggestion does recognise how growing numbers of Australians cannot fulfil their dreams of owning their own home. Home ownership is falling, especially among younger and lower-income households. Air pollution costs trillions and holds back poor countries, says World Bank. Air pollution costs the world trillions of dollars a year and severely impedes development in many countries, according to the World Bank. In a major study (pdf) of the economic costs of indoor and outdoor pollution, the bank found that in 2013 – the year from which the latest available estimates date – China lost nearly 10% of its GDP, India 7.69% and Sri Lanka and Cambodia roughly 8%.

Rich countries are also losing tens of billions of dollars a year through lost work days and welfare costs from premature deaths. Dirty air was found to cost the UK $7.6bn (£5.6bn) a year, the US $45bn and Germany $18bn. Zimbawe, Malawi and Central African Republic were among the world’s least polluted countries, but Liberia had the lowest lost labour costs among developing countries ($25m). Uruguay lost just 0.03% of its GDP, costing it $17m, but Iceland – with only 400,000 people, little industry and costs of just $3m – emerged as the cleanest country in the world overall. India’s Dharavi Recycling Slumdog Entrepreneurs. For the past three decades, there has been a transformation of the recycling psyches that has been experienced across the globe. New consumerism heaped atop rapid urbanisation and population growth has left municipalities with overarching concerns regarding waste management.

For this reason, recycling has become a worldwide multi-billion dollar industry and is set to increase as our consumer culture continues to accelerate. Sisgeographyigcsewiki.wikispaces. Urban Landuse in LEDC's How does the Urban Earth walk through of Mexico differ from the London example.How does the landuse differ? In Indian Slum, Misery, Work, Politics and Hope. Yet inside, carpenters are assembling furniture on the ground floor. One floor up, men are busily cutting and stitching blue jeans. Upstairs from them, workers are crouched over sewing machines, making blouses. And at the top, still more workers are fashioning men’s suits and wedding apparel. One crumbling shanty. Four businesses. An urbanist's guide to the Mumbai slum of Dharavi. Dharavi Slum. Asia's largest slum, Dharavi, lies on prime property right in the middle of India's financial capital, Mumbai (Bombay).

It is home to more than a million people. Many are second-generation residents, whose parents moved in years ago. 'Mumbai is on the verge of imploding' It used to be India’s urban showpiece. Today, its sceptre and crown have fallen down and, in a phase of cynical destruction masquerading as “development”, Mumbai has become a metaphor for urban blight. Consider these statistics. Rubbish could be its Mount Vesuvius. Some 7,000 metric tonnes of refuse is spewed out each day. Dumping grounds are choked, yet there is no government-mandated separation or recycling. Around 7.5 million commuters cram themselves into local trains every day and the fledgling metro and monorail are unlikely to make a perceptible difference in the near future. There are 700,000 cars on the road and the authorities indirectly encourage private vehicle ownership by adding flyovers and expressways, instead of building or speeding up mass rapid transit systems.

DharaviCasestudy. Mumbai's slum solution? Mukesh Mehta wears a crisp shirt and tie as he picks his way past makeshift shacks and stinking open gutters in Dharavi, Asia's largest slum. Dharavi is a dense labyrinth of dirt roads in the centre of India's biggest and most economically important city, Mumbai (Bombay). Estimates of its population size vary but it is likely that up to a million people live in these crowded lanes. But now the slum faces complete demolition under an audacious plan designed by Mr Mehta. As a wealthy architect turned property tycoon, Mr Mehta makes an unlikely development visionary. A decade ago he became a government consultant after returning to Mumbai from his career designing bespoke mansions for rich clients in Long Island, New York.

Only 3% of UK householders think there is a stigma attached to wasting food, while many try to save money by switching off lights or turning down the heating, instead of reducing food waste, according to a report. The Sainsbury’s survey of food waste habits shows that the vast majority of people fail to see the value of watching out for food waste, compared with other money-saving habits that have become second nature.

According to the poll of more than 5,000 UK adults, 74% of householders actively turn lights off when they leave a room and 55% turn down the heating. Nearly one-third (32%) have changed energy suppliers to keep household bills down, saving an average of £200 a year. Dharavi Slum - A Look Inside India's Largest Slum. Out the 21 million people that live in Mumbai, a whopping 62% (or ~13 million people) live in the various slums around the city. Most of these slum dwellers survive on less than $1USD per day and spend their entire days working long hours in the blistering sun, using rivers as toilets, sleeping on sidewalks and scraping to find shelter under bridges.