Heritage and Hate: Mississippi’s State Flag. The Civil War, Part I: Crash Course US History #20. A Summary of the Civil War. O Captain! My Captain! by Walt Whitman. American Civil War. Were the Confederates the good guys in the Civil War? Let's look at the argument of the only person who somehow said yes to this rather straightforwardly 'no' topic. 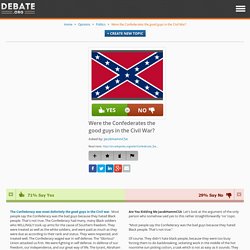 "Most people say the Confederacy was the bad guys because they hated Black people. That's not true. "Of course. They didn't hate black people, because they were too busy forcing them to do backbreaking, sickening work in the middle of the hot noontime sun picking cotton, a task which is not as easy as it sounds. They can't afford to hate black people, because they practically required them as slaves to fuel their primitive, agriculture-driven lives. " War & Human Nature: Crash Course World History 204. Vietnam '67 - The New York Times. How Young Soldiers Saw Life in Wartime Vietnam - A U.S.O. performance at Fire Base Rawlings. Tay Ninh Province, Vietnam. November - The New York Times.

Agent Orange’s Long Legacy, for Vietnam and Veterans - The New York Times. Children of the Vietnam War. They grew up as the leftovers of an unpopular war, straddling two worlds but belonging to neither. 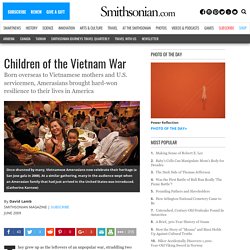 Most never knew their fathers. Many were abandoned by their mothers at the gates of orphanages. Some were discarded in garbage cans. The US veterans going back to live in Vietnam. Image copyright Charles Fox More than 40 years after the end of the Vietnam war, dozens of ageing former American soldiers have gone back to the country to live. 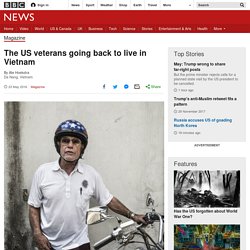 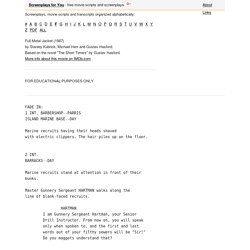 More info about this movie on IMDb.com FADE IN: 1 INT. All movie scripts and screenplays on «Screenplays for You» site are intended for fair use only. The Kings Speech - Last Speech. The London Blitz, 1940. The London Blitz, 1940 The appearance of German bombers in the skies over London during the afternoon of September 7, 1940 heralded a tactical shift in Hitler's attempt to subdue Great Britain. 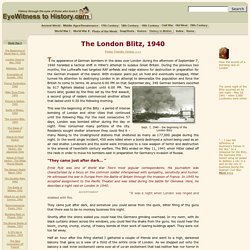 During the previous two months, the Luftwaffe had targeted RAF airfields and radar stations for destruction in preparation for the German invasion of the island. With invasion plans put on hold and eventually scrapped, Hitler turned his attention to destroying London in an attempt to demoralize the population and force the British to come to terms. At around 4:00 PM on that September day, 348 German bombers escorted by 617 fighters blasted London until 6:00 PM.

Two hours later, guided by the fires set by the first assault, a second group of raiders commenced another attack that lasted until 4:30 the following morning. World war 2 propaganda posters. American Women in WW2 - U.S. Army Girls - It's Your War Too (1944) Full Length Educational Film. George VI - King's Speech, September 3, 1939. This is the King's Speech which George VI broadcast to his people in Britain, and throughout the Empire, immediately after Britain's Declaration of War against Germany on September 3, 1939. 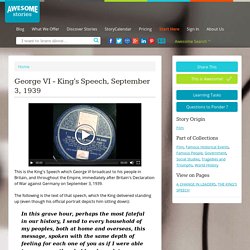 The following is the text of that speech, which the King delivered standing up (even though his official portrait depicts him sitting down): Soon after the King delivered this speech, other Dominion governments also declared war against Germany. The impact of the war upon the King, George VI, was incalculable. He died, at the age of 56, in February of 1952. He was succeeded by his daughter, Britain's current Queen Elizabeth II. WWII HOME FRONT NEWSREEL "AMERICA'S CALL TO ARMS" 70972. World War 2 in 7 Minutes. Lesson Plans: Analyzing WWII Propaganda Posters. Winning Over Hearts and Minds: Analyzing WWII Propaganda Posters Propaganda played a key part in the United States’ war effort. 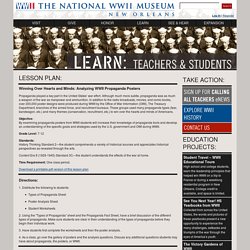 Although much more subtle, propaganda was as much a weapon of the war as manpower and ammunition. In addition to the radio broadcasts, movies, and comic books, over 200,000 poster designs were produced during WWII by the Office of War Information (OWI), The Treasury Department, branches of the armed force, and recruitment bureaus. These groups used many propaganda types (fear, bandwagon, etc.) and many themes (conservation, recruitment, etc.) to win over the hearts and minds of Americans. Lesson Plans: My Dear Little Boys: A Letter Home from War. "My Dear Little Boys…" Interpreting a Letter Home from the War Letters written by soldiers in World War II to family, loved ones, and friends were a lifeline between the writer and those on the Home Front. 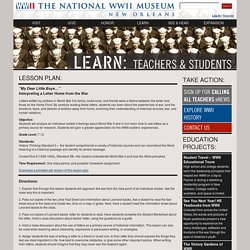 By carefully reading these letters, students can learn about the experiences of war, and the emotions, fears, and desires of soldiers away from home, enriching their understanding of historical sources, war, and human relations. Objective:Students will analyze an individual soldier’s feelings about World War II and in turn learn how to use letters as a primary source for research. Students will gain a greater appreciation for the WWII soldiers’ experiences. Lesson Plans. The Museum has created these Lesson Plans that you may print out for your classroom use. 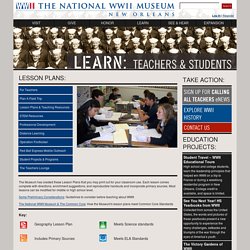 Propaganda Posters. Mickey Mouse In Vietnam. The Vietnam War. War. War. Top 10 Songs About War. When you mix classic rock and songs about war, you expect plenty of songs about Vietnam. 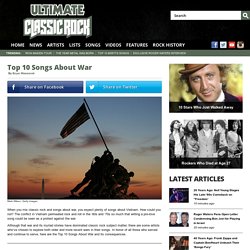 How could you not? The conflict in Vietnam permeated rock and roll in the ’60s and ’70s so much that writing a pro-love song could be seen as a protest against the war. Although that war and its myriad stories have dominated classic rock subject matter, there are some artists who’ve chosen to explore both older and more recent wars in their songs. In honor of all those who served and continue to serve, here are the Top 10 Songs About War and its consequences.

From: ‘…And Justice for All’ (1988) James Hetfield and Lars Ulrich wrote ‘One’ based on Dalton Trumbo’s 1939 book, ‘Johnny Got His Gun.’ ‘I-Feel-Like-I’m-Fixin’-to-Die Rag’ Country Joe and the Fish From: ‘I Feel Like I’m Fixin’ to Die’ (1967) AfricanAmericanWWII_Study_Guide.pdf. George Takei: Why I love a country that once betrayed me. Japanese-American Internment. Many Americans worried that citizens of Japanese ancestry would act as spies or saboteurs for the Japanese government. Fear — not evidence — drove the U.S. to place over 127,000 Japanese-Americans in concentration camps for the duration of WWII. Over 127,000 United States citizens were imprisoned during World War II. Their crime? Being of Japanese ancestry. Despite the lack of any concrete evidence, Japanese Americans were suspected of remaining loyal to their ancestral land. Succumbing to bad advice and popular opinion, President Roosevelt signed an executive order in February 1942 ordering the relocation of all Americans of Japanese ancestry to concentration camps in the interior of the United States.