Palley’s Critique of MMT: Post Keynesian or neo-Keynesian? February 18, 2014 by pilkingtonphil So, Tom Palley has a new criticism out of MMT. 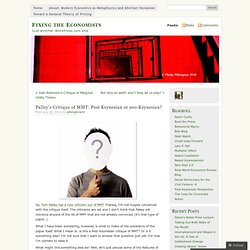 Frankly, I’m not hugely concerned with the critique itself. Thomas Palley Dismembers MMT. Thomas Palley has written another critique of Neochartalism aka “Modern Monetary Theory” in the blogosphere. 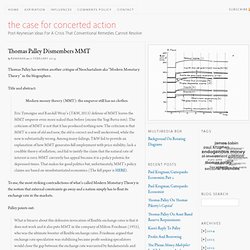 Title and abstract: Modern money theory (MMT): the emperor still has no clothes Eric Tymoigne and Randall Wray’s (T&W, 2013) defense of MMT leaves the MMT emperor even more naked than before (excuse the Yogi Berra-ism). A Response to Tom Palley. Tom Palley wrote a strongly worded critique of Modern Monetary Theory last year, which got a lot of attention int he world of heterodox economics. 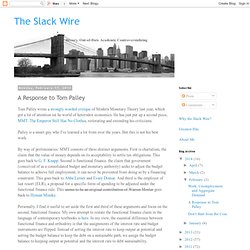 He has just put up a second piece, MMT: The Emperor Still Has No Clothes, reiterating and extending his criticisms. Palley is a smart guy who I've learned a lot from over the years. But this is not his best work. By way of preliminaries: MMT consists of three distinct arguments. First is chartalism, the claim that the value of money depends on its acceptability to settle tax obligations. Personally, I find it useful to set aside the first and third of these arguments and focus on the second, functional finance. Bond Economics: MMT And Constraints. The economist Thomas Palley launched a broadside against Modern Monetary Theory (MMT), raising a variety of comments across the blogosphere. 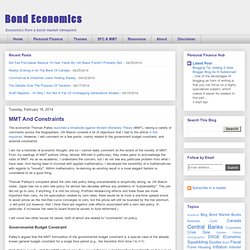 JW Mason covered a lot of objections that I had to the article in this response. However, I will comment on a few points, mainly related to the government budget constraint, and external constraints. A not-so-friendly critical look at MMT? Academic discussions are good. 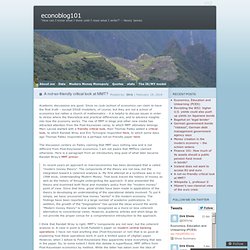 Since no (sub-)school of economics can claim to have the final truth – except DSGE modellers, of course, but they are not a school of economics but rather a church of mathematics – it is helpful to discuss issues in order to stress where the theoretical and practical differences are, and to advance insights into how the economy works. The rise of MMT in blogs and other new media has attracted attention from the Post-Keynesian camp, to which MMT ultimately belongs. Marc Lavoie started with a friendly critical look, then Thomas Palley added a critical look, to which Randall Wray and Èric Tymoigne responded here, to which some days ago Thomas Palley responded by a perhaps not-so-friendly paper here. Palley on MMT. Ramanan is very impressed by Palley's MMT critique (pdf) and while I think there are good MMT critiques out there, I don't think Palley's is one. 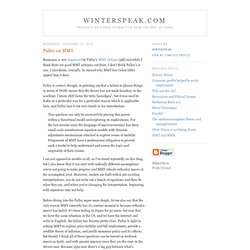 I also think, crucially, he missed why MMT has (what little) appeal that it does. Palley is correct, though, in pointing out that a failure to phrase things in terms of DGSE means that the theory has not made headway in the academy. I know JKH hates the term "paradigm", but it was used by Kuhn in a particular way for a particular reason which is applicable here, and Palley lays it out very clearly in his introduction: This question can only be answered by placing that power within a theoretical model and exploring its implications. Palley on the limitations of MMT once again. The Center of the Universe » Blog Archive » Reader’s note to Palley. Bill Mitchell eviscerates critics of MMT who don't bother to acquaint themselves with the literature. Bill is clearly annoyed, as he should be, that people like Thomas Palley criticize "MMT" without being aware of what MMT economists have published. 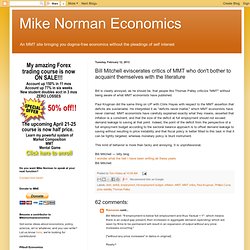 Paul Krugman did the same thing on UP with Chris Hayes with respect to the MMT assertion that deficits are sustainable. He interpreted it as "deficits never matter," which MMT economists have never claimed. MMT economists have carefully explained exactly what they means, asserted that inflation is a constraint, and that the size of the deficit at full employment should not exceed demand leakage to saving at that point. Indeed, the point of the deficit from the perspective of a full employment budget according to the sectoral balance approach is to offset demand leakage to saving without resulting in price instability and that fiscal policy is better fitted to this task in that it can be tightly targeted, whereas monetary policy is blunt instrument. This kind of behavior is more than tacky and annoying. I wonder what the hell I have been writing all these years. I have spent almost the entire time I have been in academic life – from the time I was a fourth-year student, onto Masters, then PhD and subsequently as an teaching and research academic – studying, writing, publishing, and teaching about the Phillips curve and the link between labour markets and inflation. 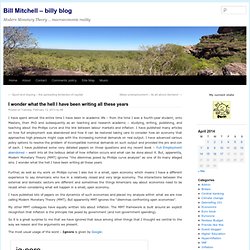 I have published many articles on how full employment was abandoned and how it can be restored taking care to consider how an economy that approaches high pressure might cope with the increasing nominal demands on real output. I have advanced various policy options to resolve the problem of incompatible nominal demands on such output and provided the pro and con of each. I have published some very detailed papers on those questions and my recent book – Full Employment abandoned – went into all the tedious detail of how inflation occurs and what can be done about it. My other MMT colleagues have equally written lots about inflation. Thomas Palley — A critique of Modern Monetary Theory (MMT) 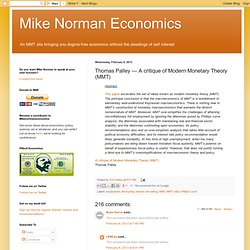 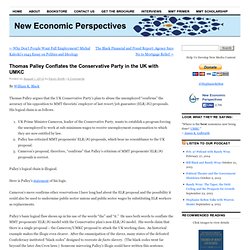 Black Thomas Palley argues that the UK Conservative Party’s plan to abuse the unemployed “confirms” the accuracy of his opposition to MMT theorists’ employer of last resort/job guarantee (ELR/JG) proposals. His logical chain is as follows. UK Prime Minister Cameron, leader of the Conservative Party, wants to establish a program forcing the unemployed to work at sub-minimum wages to receive unemployment compensation to which they are now entitled by law.Palley has criticized MMT proponents’ ELR/JG proposals, which bear no resemblance to the UK proposal.Cameron’s proposal, therefore, “confirms” that Palley’s criticism of MMT proponents’ ELR/JG proposals is correct.

Deficitowl: Except that Cameron's scheme... Thomas Palley — ELR Comes to the UK. Thomas Palley » Blog Archive » ELR Comes to the UK. ELR Comes to the UK The following story, which appeared in The Guardian on Sunday 29 July, was forwarded to me by Malcolm Sawyer: “Million jobless may face six months’ unpaid work or have unemployment benefits stopped” In a sense, the UK, under Conservative Prime Minister Cameron, is looking to adopt a quasi-employer of last resort (ELR) scheme in which the ELR wage is set equal to existing unemployment benefits (Note: the Conservative scheme involves compulsory labor for benefits). Cameron’s move confirms other reservations I have long had about the ELR proposal and the possibility it could also be used to undermine public sector unions and public sector wages by substituting ELR workers as replacements. In addition, there are other technical financing and macroeconomic issues.

Great Leap Forward » ON THE SUPPOSED WEAKNESSES OF MMT: RESPONSE TO PALLEY. “Tom Palley says that MMT “ignores the effects of sectoral bottlenecks and imbalances” (see ). In 1997, shortly after arriving at the Levy Economics Institute to work on this project, Levy issued a working paper dealing with exactly these issues, “Selective Use of Discretionary Public Employment and Economic Flexibility” In a note on “Institutionalist Approaches to Full Employment Policies” from the JEI in 1998, I wrote that: “involuntary unemployment is not simply an “aggregate” problem.

Thomas Palley — MMT/ELR: A Mix of Old and Unsubstantiated New Ideas. Wh10 said... On first glance, I think it is a fair response. He has changed from "wrong" to "unsubstantiated. "It seems that MMTers have addressed some of the unresolved issues he cites, but this may be a problem of there only being a handful of MMTers, as Scott says. Papers have been published, but for many of these issues, in relatively limited quantity, scope, and depth of analysis (modeling/quant incluced) vs. other formal economic schools.I think a lot of the online MMT fan base/commenters have an oversimplified understanding of economics and a black and white view of the world. Academics is not like that and requires rigorous analysis and an appreciation for nuance. July 27, 2012 at 8:22 PM Matt Franko said... Thomas Palley » Blog Archive » MMT/ELR: A Mix of Old and Unsubstantiated New Ideas. Randy Wray and Mat Forstater, two leading contributors to the MMT School, have replied to my recent blog on the MMT controversy.

Their replies warrant a brief response. I agree that it does not matter very much who first identified the euro’s potential for failure. Along with other Keynesians, MMT-ers were early to identify the euro’s structural flaw – namely, its conversion of the financial status of national government into provincial government status via removal of government’s power to access money creation through a government controlled central bank. In many ways Warren Mosler (1995) is the godfather of interest in this issue. Randy Wray — On The Supposed Weaknesses Of MMT: Response To Palley.

Thomas I. Palley attacks MMT head on — "More on the spurious victory claims of MMT" Palley on the spurious victory claims of MMT. Thomas I. Palley (orginally posted here) Led by Randy Wray (see this and this), supporters of so-called Modern Monetary Theory (MMT) are declaring that they were the first to identify the problems of the euro and that MMT has now proved itself to be the correct approach to monetary theory. As regards these two claims, permit me to quote the following: “5.3 Will capital still be able to veto policy?