The War on the Poor

Canada & the War on the Poor

Some Lives Matter More Than Others (The War on the Poor) How are they Supposed to Get Shealter? (The War on the Poor) Accumulation by dispossession. Hyperbole and Class War Rhetoric. Wisconsin & The War on the Poor. Demonizing Poor Parents. The planned Parrenthood debat3. Hypocracy & The Class War. Raising The Draw Bridge to The American Dream. Prioraties & The Poor. Louie Gohmert: Raise taxes on poor people because they can pay with welfare. By David EdwardsTuesday, January 28, 2014 16:04 EDT Texas Rep. 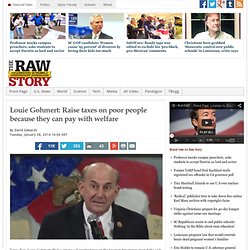 Louie Gohmert (R) has proposed raising taxes on the poorest Americans even if the only money they have to pay is money that they get from government programs like welfare. At a Tea Party Patriots event in South Carolina earlier this month, Gohmert said that he had his own plan to address income inequality. “There’s not a blessed thing this president has proposed that will change the situation of his buddy, Warren Buffet, paying a lower percentage than his secretary,” Gohmert told the crowd. “I know that folks that are big on the fair tax, I just want a simple tax. The Texas Republican recalled that he had enlisted his friend, publisher Steve Forbes, to convince the Republican Party that “fair share” really meant “flat tax.” “You make more, you pay more; you make less, you pay less,” he said. Gohmert said that he had “wrestled” with what to do with people who were so poor that they barely got by on government assistance.

RT: permits to feed homeless. AlterNet - So much for human decency. Homeless Banned from Selling Newspapers on Major Roads? January 24, 2014 | Like this article? 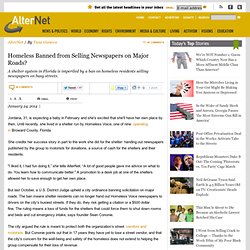 Join our email list: Stay up to date with the latest headlines via email. Jordana, 31, is expecting a baby in February and she's excited that she'll have her own place by then. Until recently, she lived in a shelter run by Homeless Voice, one of nine operating in Broward County, Florida. She credits her success story in part to the work she did for the shelter: handing out newspapers published by the group to motorists for donations, a source of cash for the shelters and their residents. "I liked it, I had fun doing it,” she tells AlterNet. But last October, a U.S.

The city argued the rule is meant to protect both the organization’s street vendors and motorists. Instead, he sees the ordinance as an effort to hide visible poverty from the nicer parts of town. For years advocates for the homeless have fought laws that appear to u nfairly target homeless people. Reich, War on Poor, connect dots. Try Waging War on Poverty Instead of the Poor. As Congress stumbles into yet another budget/debt limit conference committee round of discussions, it appears that the losers along the way remain those at the bottom of the economic heap. 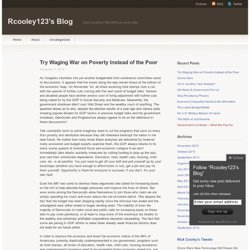 On November 1st, all those receiving food stamps took a cut, with the specter of further cuts coming with the next round of budget talks. Seniors and disabled people face another anemic cost of living adjustment with further cuts being called for by the GOP in Social Security and Medicare. Meanwhile, the government shutdown didn’t cost Wall Street and the wealthy much of anything. The question arises as to why, despite the election results of a year ago and various polls showing popular disdain for GOP tactics in previous budget talks and the government shutdown, Democrats and Progressives always appear to be on the defensive in these discussions?

Suggested Further Reading: People Across America Are Waking Up to the Effects of Disaster Capitalism – a Much Better Way of Life Is Possible. The Ryan Budget: How I Spent My Weekend. 6 states that want poor people to pee into cups to prove they aren’t on drugs. On December 31, U.S. 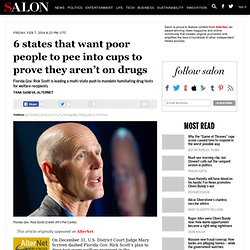 District Court Judge Mary Scriven dashed Florida Gov. Rick Scott’s plan to drug test every welfare recipient in the state, ruling, ”there is no set of circumstances under which the warrantless, suspicionless drug testing at issue in this case could be constitutionally applied.” The decision upheld a temporary ban from 2011, just four months after the start of the program. In that brief time, Florida tested the urine of over 4,000 people. Only 2.6 percent tested positive for drugs. The law’s inability to meet constitutional standards, unmask hordes of drug-addled welfare recipients or even save the state money has not discouraged Gov. Hope springs eternal in other states as well. “It’s politics playing on stereotypes and taking advantage of people’s fears in a time of economic distress,” Jason Williamson of the ACLU tolf AlterNet.

Florida is not the only state where drug tests for welfare recipients failed to save the state money or even catch people who use drugs. The Truly Entitled. Class war. Trickle Up Welfare. Racism & The War on the Poor. Poor Shaming. The real class war.