‎lundysushistory.weebly.com/uploads/8/6/9/1/8691769/gettingintothewar.pdf. Pacifica Radio/KPFA/UC Berkeley Library: Other Social Activist Movements & Activities Social Activism Sound Recording Project: Martin Luther Kind, "Why I Am Opposed to the War in Vietnam ," April 30, 1967, Riverside Church, New York. The sermon which I am preaching this morning in a sense is not the usual kind of sermon, but it is a sermon and an important subject, nevertheless, because the issue that I will be discussing today is one of the most controversial issues confronting our nation. 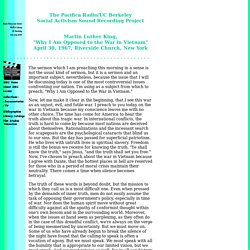 I'm using as a subject from which to preach, "Why I Am Opposed to the War in Vietnam. " Now, let me make it clear in the beginning, that I see this war as an unjust, evil, and futile war. I preach to you today on the war in Vietnam because my conscience leaves me with no other choice. ‎jaclynburr.weebly.com/uploads/1/8/7/0/18702776/lesson_plan_-_vietnam_songs.pdf. ‎www.eastconn.org/tah/1112MM2_MyLaiMassacreRoundRobinLesson.pdf. ‎www.museumca.org/wgolessons/pdf/lesson2/OMCA_WGO_lesson2_ABOUT-TET-OFFENSIVE.pdf. ‎hooversocialscience.wikispaces.com/file/view/The+TET+Offensive.PDF. ‎faculty.summitps.org/attachments/article/36/Gulf%20of%20Tonkin%20Resolution%20Lesson%20Plan.pdf. 02.03.05: Debating the Future of Indochina in 1945: Making Your Case.

Objectives Rationale Making your case is a skill that is valuable throughout life (and on standardized essay tests). 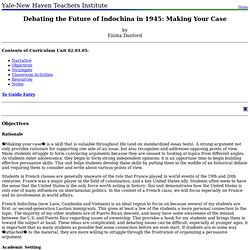 A strong argument not only provides rationale for supporting one side of an issue, but also recognizes and addresses opposing points of view. American Experience. By John Kerry testimony to the U.S. 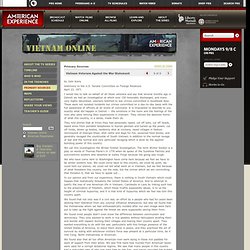 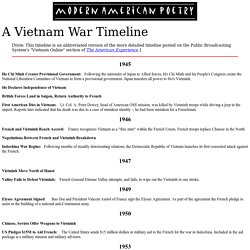 Vietminh Move North of Hanoi Chinese, Soviets Offer Weapons to Vietminh. Drafthistory.html. In general, those who use dissent, civil disobedience, or pacifism to question U.S. involvement in war or conscription have done so for: Goal #2: To illustrate the historical evolution of anti-war and anti-draft dissent, as well as official and public responses to such actions Ever since war began to be waged by Euro-Americans when they came to North America, people have either voluntarily or involuntarily served in the military. 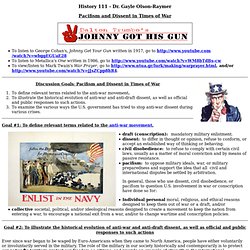 The role of the military in our society historically and contemporarily is to protect our nations territory, protect our freedom as citizens, and provide an example of strength in the international community. Consequently, we have a long history of both anti-war and anti-draft activity both in colonial America and in the U.S. Timeline of Anti-War and Anti-Draft Activity and Government Response First Era, 1607-1783: Colonial, then state, militias – volunteer and conscripted – served short-term military needs at the national level.

The Gulf of Tonkin and the Vietnam War - History 12. Iconic Image 3. Anne Mergen: Editorial Cartoonist. Conflict in Vietnam - graphics and cartoons. The Center for the Teaching of American History. Lesson Plans -- Student Protesting Vietnam A Document Based Question by Amber Lovell Hist 530B Spring 2004 Historical Context: The Vietnam War was the longest and most unpopular war in American history. 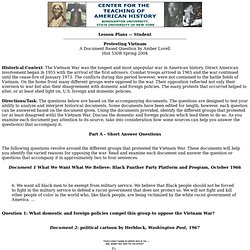 Direct American involvement began in 1955 with the arrival of the first advisors. Combat troops arrived in 1965 and the war continued until the cease-fire of January 1973. The conflicts during this period however, were not contained to the battle fields of Vietnam. Directions/Task: The questions below are based on the accompanying documents.

Part A - Short Answer Questions The following questions revolve around the different groups that protested the Vietnam War. Document 1 What We Want What We Believe: Black Panther Party Platform and Program, October 1966 6. Question 1: What domestic and foreign policies compel this group to oppose the Vietnam War? Document 2: political cartoon by Herblock, Washington Post, 1967 Document 3: Poster, "The Great Society. " Part B - Essay Question Grading Rubric. The Center for the Teaching of American History. African-American Involvement in the Vietnam War. DBQ on Vietnam. "Dear Mom, . . . 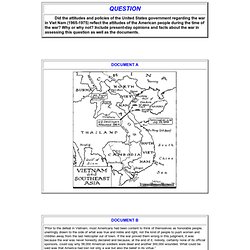 Yesterday I witnessed something that would make any American realize why we are in this war. At least it did me. I was on daylight patrol. We were on a hill overlooking a bridge that was out of our sector. I saw a platoon of Vietcong stopping traffic from going over the bridge. How are the people taking to the war in Portland? . . . . One guy (who had broke down and cried) said that his one desire is to get enough leave to go home and kick three of those demonstrators in a well-suited place and bring him back. ‎www.nzhistory.net.nz/files/documents/vietnam-fact-sheet6.pdf. ‎www.nzhistory.net.nz/files/documents/vietnam-fact-sheet5.pdf. ‎www.nzhistory.net.nz/files/documents/vietnam-fact-sheet4.pdf. Battlefield:Vietnam. The Geneva Peace Accords The Geneva Peace Accords, signed by France and Vietnam in the summer of 1954, reflected the strains of the international cold war. 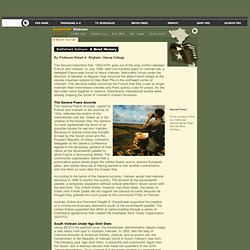 Drawn up in the shadow of the Korean War, the Geneva Accords represented the worst of all possible futures for war-torn Vietnam. Because of outside pressures brought to bear by the Soviet Union and the People's Republic of China, Vietnam's delegates to the Geneva Conference agreed to the temporary partition of their nation at the seventeenth parallel to allow France a face-saving defeat.