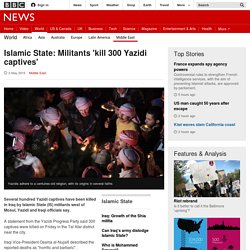 A statement from the Yazidi Progress Party said 300 captives were killed on Friday in the Tal Afar district near the city. Iraqi Vice-President Osama al-Nujaifi described the reported deaths as "horrific and barbaric". Thousands of members of the religious minority group were captured last year. It is not clear how they were killed, or why this has happened now, says the BBC World Service Middle East editor Alan Johnston. Many are reported to have been held in Mosul, the main stronghold of IS after the militants swept through large areas of northern and western Iraq, and eastern Syria in 2014. Yazidis, whose religion includes elements of several faiths, are considered infidels by IS. Thousands fled to the Kurdish-controlled region of northern Iraq after IS captured the Yazidi-populated Sinjar district in Nineveh province. Iraq and the Problem of Terrorism. 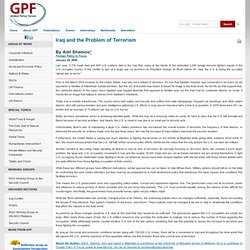 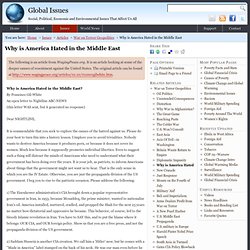 By Francisco Gil-White An open letter to Nightline ABC-NEWS (this letter WAS sent, but it generated no response) Dear NIGHTLINE, It is commendable that you seek to explore the causes of the hatred against us. Please do your best to turn this into a history lesson. I implore you to avoid trivialities. 1) The Eisenhower administration's CIA brought down a popular representative government in Iran, in 1953, because Mosaddeq, the prime minister, wanted to nationalise Iran's oil. 2) Saddam Hussein is another CIA creation. 3) Saddam thought he had our blessing for everything. 4) Jihad as political holy war had been a dead concept in Islam for centuries, until WE brought it back to life. 5) When it became necessary to deliver Kuwait from OUR violent protegé Saddam Hussein, American troops were stationed in Saudi Arabia, bin Laden's homeland.

Why Do They Hate Us? It’s a Pretty Long List… TheBlaze consults experts to glean insight into why Islamists and even a contingent of secular Muslims across the Middle East harbor such animus for AmericaThe reasons cited include: Anti-Semitism, U.S. drone attacks, slandering Islam, different views on personal freedom, a belief that America sides with dictators (i.e. late Egyptian President Hosni Mubarak), the wars in Iraq and Afghanistan, a belief that America is raping the Middle East of its natural resources and is trying to take over the region. 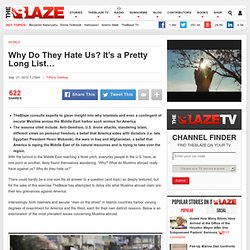 With the turmoil in the Middle East reaching a fever pitch, everyday people in the U.S. have, at one point or another, likely found themselves wondering: “Why? What do Muslims abroad really have against us? Why do they hate us?” Why they still hate us, 13 years later. Watching the gruesome execution videos, I felt some of the same emotions I did after 9/11. 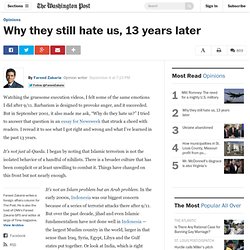 Barbarism is designed to provoke anger, and it succeeded. But in September 2001, it also made me ask, “Why do they hate us?” I tried to answer that question in an essay for Newsweek that struck a chord with readers. I reread it to see what I got right and wrong and what I’ve learned in the past 13 years. It’s not just al-Qaeda. Fareed Zakaria writes a foreign affairs column for The Post. Facebook It’s not an Islam problem but an Arab problem. Arab political decay. The one aspect of life that Arab dictators could not ban was religion, so Islam had become the language of political opposition. The Arab world was left with dictatorships on one hand and deeply illiberal opposition groups on the other — Hosni Mubarak or al-Qaeda.

20,000 homicide bombers parade through Baghdad. Obama’s legacy — the left can say what they want, but Bush left behind a stable Iraq, which is why Obama thought he could toss it off and take credit for its success — until he got his grubby, greasy paws on it, that is. 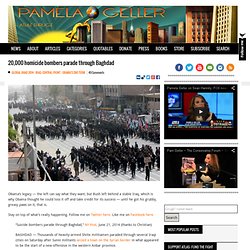 A volunteer in the newly formed “Peace Brigades” trains near the Imam Ali shrine in the southern holy Shiite city of Najaf on Friday.Photo: APShiite politicians familiar with the secretive efforts to remove al-Maliki said two names mentioned as replacements are former vice president Adel Abdul-Mahdi, a Shiite and French-educated economist, and Ayad Allawi, a secular Shiite who served as Iraq’s first prime minister after Saddam Hussein’s ouster.

The Iraq War 2003 – 2011. 伊拉克戰爭2003年 - 2011年。 Weathering Iraq's Stormy Romance with the West. With some imagination, you may view Jordan as a success story of European meddling. 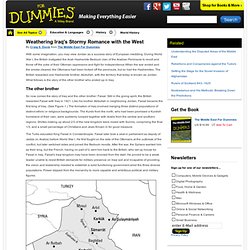