The Causes of War

In Canada, war is the PM’s prerogative. This week, with little ceremony and no debate, Canada’s Prime Minister ordered the military into action on a foreign shore. 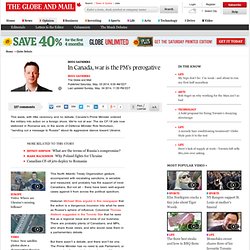 We’re not at war: The six CF-18 jets now stationed in Romania are, in the words of Defence Minister Rob Nicholson, “sending out a message to Russia” about its aggressive stance toward Ukraine. This North Atlantic Treaty Organization gesture, accompanied with escalating sanctions, is sensible and measured, and probably has the support of most Canadians. But not all – there have been well-argued cases against it from across the political spectrum. War Is A Racket, by Major General Smedley Butler, 1935. Obama Said He's 'Really Good At Killing People' Toddlers Kill More Americans Than Terrorists. The Causes of War. Britain Has Invaded Nine Out Of Ten Countries, From France To United States. Britain has invaded nearly 90% of the world's countries during its history, with only 22 out of 193 not on the receiving end of a bit of Great British aggression according to new research. 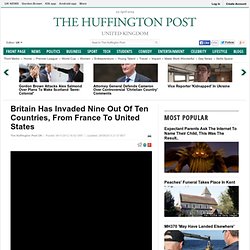 The findings are detailed in a book, "All the Countries We've Ever Invaded: And the Few We Never Got Round To", by history author, Stuart Laycock. The Telegraph reports that Laycock examined each country in turn looking for evidence that Britain had ever established a military presence either through regular armed forces or pirates, privateers or armed explorers operating with government approval. Hotter Weather Actually Makes Us Want to Kill Each Other - Olga Khazan. A new meta-analysis finds that extreme changes in temperature increase the likelihood of inter-group conflict. 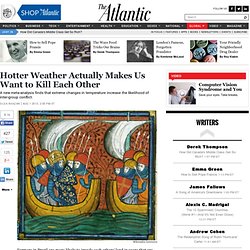 Wikimedia Commons Farmers in Brazil are more likely to invade each others' land in years that are particularly wet or unusually dry. Americans honk their horns more at other cars when it's hot outside. Countries in the tropics are more likely to have civil wars in years that are especially hot or dry. Killing hackers is justified in cyber warfare, says NATO-commissioned report. A landmark document created at the request of NATO has proposed a set of rules for how international cyberwarfare should be conducted. 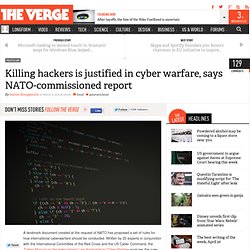 Written by 20 experts in conjunction with the International Committee of the Red Cross and the US Cyber Command, the Tallinn Manual on the International Law Applicable to Cyber Warfare analyzes the rules of conventional war and applies them to state-sponsored cyberattacks. Hans Blix: Whether Obama in Syria or Bush in Iraq, The US Is Not the World Police. 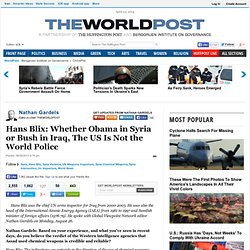 He was also the head of the International Atomic Energy Agency (IAEA) from 1981 to 1997 and Swedish minister of foreign affairs (1978-79). He spoke with Global Viewpoint Network editor Nathan Gardels on Monday, August 26. President Obama’s Syria problem — through the lens of Michael Grimm. Things are looking increasingly Grimm for the White House when it come to Syria. 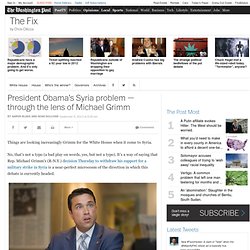 No, that's not a typo (a bad play on words, yes, but not a typo). It's a way of saying that Rep. Michael Grimm's (R-N.Y.) decision Thursday to withdraw his support for a military strike in Syria is a near-perfect microcosm of the direction in which this debate is currently headed. Rep. Michael Grimm (R-N.Y.). After President Obama asked Congress to authorize military action, the combat veteran Grimm quickly jumped on-board: "I am supporting the president on this. ... Five days later, things changed. Military budget. Military spending in 2005 A military budget (or military expenditure), also known as a defense budget, is the amount of financial resources dedicated by an entity (most often a nation or a state), to raising and maintaining an armed forces. 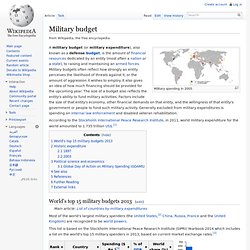 Military budgets often reflect how strongly an entity perceives the likelihood of threats against it, or the amount of aggression it wishes to employ. It also gives an idea of how much financing should be provided for the upcoming year. The size of a budget also reflects the entity's ability to fund military activities. Factors include the size of that entity's economy, other financial demands on that entity, and the willingness of that entity's government or people to fund such military activity. According to the Stockholm International Peace Research Institute, in 2011, world military expenditure for the world amounted to 1.735 trillion US$.[1] World's top 15 military budgets 2013[edit] Historic expenditure[edit] 1897[edit] 2003[edit]

The Cost of War Includes at Least 253,330 Brain Injuries and 1,700 Amputations. Neuroimaging techniques like this Siemens software display are used by Army doctors to examine and diagnose traumatic brain injuries. 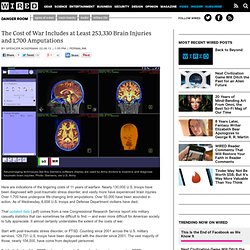 Photo: Siemens, via U.S. Army Here are indications of the lingering costs of 11 years of warfare. Nearly 130,000 U.S. troops have been diagnosed with post-traumatic stress disorder, and vastly more have experienced brain injuries. Over 1,700 have undergone life-changing limb amputations. That updated data (.pdf) comes from a new Congressional Research Service report into military casualty statistics that can sometimes be difficult to find — and even more difficult for American society to fully appreciate.

McChrystal on drones: 'a covert fix for a complex problem' Pakistan hit by 363 US assassination drone attacks since 2004: Report. A Pakistani demonstrator holds up a burning US flag during a protest against drone attacks in Pakistan’s tribal region. 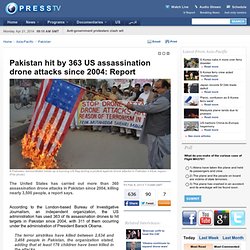 (File photo) The United States has carried out more than 360 assassination drone attacks in Pakistan since 2004, killing nearly 3,500 people, a report says. According to the London-based Bureau of Investigative Journalism, an independent organization, the US administration has used 363 of its assassination drones to hit targets in Pakistan since 2004, with 311 of them occurring under the administration of President Barack Obama. 'Did We Just Kill A Kid?' — The Six Words That Ended A US Drone Pilot's Career. MI6 told agent they could not kill al-Qaeda leader. His work helped foil three terrorist plots in Britain and Demark and led to the jailing of Hassan Tabbakh, a science graduate of Syrian origin who was making home-made bombs in Small Heath, Birmingham, it can be disclosed. 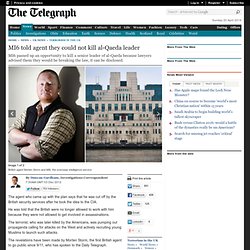 Storm has provided documentation to the Danish newspaper Jyllands Posten which confirms he was recruited by the Danish security service, the PET. A recording of a conversation with a Danish security officer provided to the Daily Telegraph confirms that he also worked for MI5, the British domestic security service. In addition, Storm says he also travelled to Yemen and East Africa on behalf of MI6, the British foreign intelligence service.

Global E-mail Patterns Reveal "Clash of Civilizations" Most political scientists consider the Cold War as a conflict between capitalist countries in the west and the Communist Bloc in the East. Attempt to kill Jong-un took place in 2012: Source. A Letter to Dictators. Is Beating Dictatorships Getting Easier? Military Spending by GDP. Spy experts rate Bond villains. Citizens' campaign to arrest Blair continues - Features. London, United Kingdom - It was only as David Cronin saw Tony Blair and his entourage striding towards him that he finally plucked up the courage to go through with his plan to attempt to arrest the former British prime minister over his role in the invasion of Iraq and claim a bounty on his head.