WWI Women on HomeFront Digital Stoy. WW1 - The Home Front. World War One. Podcast 20: Trench Life. That bloody great thing’d come up there and stand up on its back legs and gnaw something like that, you know. 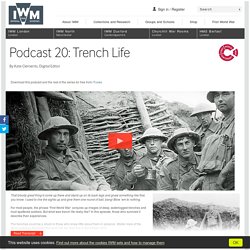 I used to line the sights up and give them one round of ball, bang! Blow ‘em to nothing. For most people, the phrase ‘First World War’ conjures up images of deep, waterlogged trenches and mud-spattered soldiers. But what was trench life really like? In this episode, those who survived it describe their experiences. The trenches could be a shock to those who knew little about them in advance. We moved to the right, I remember, got into a church yard – a cemetery – and then dropped down into a trench. And then that was the first we knew about trench warfare – we were told we hadn’t to show our heads above the parapet because there were snipers and they would get us if we did, you see, so we had to be careful.

World War 1. GERMAN ARMY WESTERN FRONT 1914-1918 (Q 23784) In the Trenches (World War I: In the Trenches, Experiencing War, Stories from the Veterans History Project, Library of Congress) ​The "War to End All Wars," 100 years later. Nearly a century ago, Corporal Martin Berger, from the Bronx, N.Y., went into battle in France. 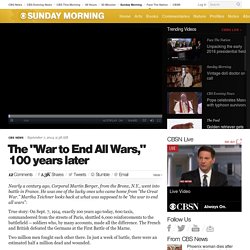 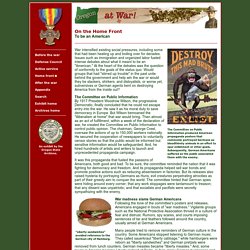 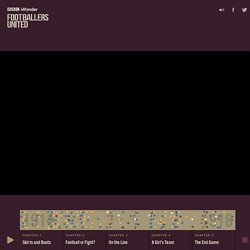 The idea for a battalion of footballers and fans arose out of the enormous popularity of ‘Pals’ or ‘Chums’ Battalions in the first few months of the war. It was generally thought that young men would be much more inclined to sign up for the army if they knew they were going to serve alongside their mates or fellow workers. Thus, groups such as the Stockbrokers Battalion and the Liverpool ‘Pals’ were quickly formed. Footballers generally had not been so quick to sign up en masse - mainly because they were contracted to clubs which were wrestling with the inevitable financial impact of losing all their players (and most of their fans) to the army. The Government too initially encouraged the clubs to play on thinking it was good for national morale – although public opinion quickly turned on that score with many thinking it scandalous that young fit men would stay at home playing sport while others went off to France to fight for their country. 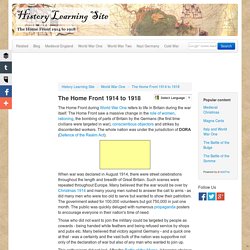 The Home Front saw a massive change in the role of women, rationing, the bombing of parts of Britain by the Germans (the first time civilians were targeted in war), conscientious objectors and strikes by discontented workers. The whole nation was under the jurisdiction of DORA (Defence of the Realm Act). When war was declared in August 1914, there were street celebrations throughout the length and breadth of Great Britain. Such scenes were repeated throughout Europe. Many believed that the war would be over by Christmas 1914 and many young men rushed to answer the call to arms - as did many men who were too old to serve but wanted to show their patriotism. Those who did not want to join the military could be targeted by people as cowards - being handed white feathers and being refused service by shops and pubs etc.

This enthusiasm did not last. The Germans also attacked Britain itself. Rationing and World War One. Rationing was introduced into Britain at the tail end of World War One - in February 1918. 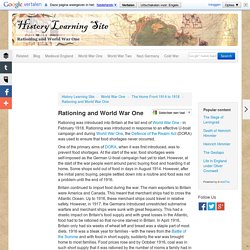 Rationing was introduced in response to an effective U-boat campaign and during World War One, the Defence of the Realm Act (DORA) was used to ensure that food shortages never occurred. 20141225_me_a_century_ago_when_the_guns_fell_silent_on_christmas_ A Century Ago, When The Guns Fell Silent On Christmas : Parallels. British and German soldiers fraternizing at Ploegsteert, Belgium, on Christmas Day 1914. 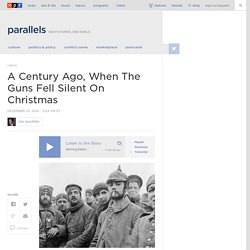 World War I was raging at the time, but front-line troops initiated the truce, which they documented in photos and letters. Commanders on both sides were furious when they learned of it. Courtesy of Imperial War Museum hide caption itoggle caption Courtesy of Imperial War Museum British and German soldiers fraternizing at Ploegsteert, Belgium, on Christmas Day 1914. Courtesy of Imperial War Museum A century ago, young men in Europe were killing each other by the tens of thousands. The Christmas Truce of 1914 has become the stuff of legend, portrayed in films, television ads, and songs. "On Christmas Eve, at noon, fire ceased completely on both fronts," said German Army officer Walther Stennes. "We heard a German singing Holy Night, of course in German, naturally," recalled British soldier Colin Wilson. He is referring to the carol known today as Silent Night. That was mid-December. Västfronten - Första världskriget. Utbildningsradion, 2014, Från 13 år, 3 min. 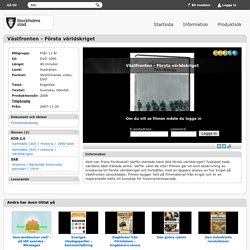 Photos, letters and other memorabilia It was the war that tore Europe apart – a struggle between the central powers of Germany, Austria-Hungary, Turkey and Bulgaria, against the allied powers of Britain, France, Belgium, Russia, Italy and the USA. 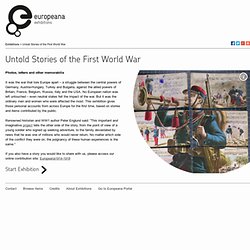 No European nation was left untouched – even neutral states felt the impact of the war. But it was the ordinary men and women who were affected the most. World War I (1914–1919): Overview. World War I took place between 1914 and 1918. 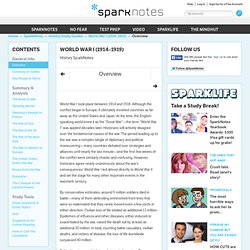 Although the conflict began in Europe, it ultimately involved countries as far away as the United States and Japan. The Causes of World War One. June 28 in Sarajevo We'll start with the facts and work back: it may make it all the easier to understand how World War One actually happened. The events of July and early August 1914 are a classic case of "one thing led to another" - otherwise known as the treaty alliance system. The explosive that was World War One had been long in the stockpiling; the spark was the assassination of Archduke Franz Ferdinand, heir to the Austro-Hungarian throne, in Sarajevo on 28 June 1914. (Click here to view film footage of Ferdinand arriving at Sarajevo's Town Hall on 28 June 1914.)