No war of conquest, nothing to reconquer. Really?

A number of European countries were forced to tough austerity measures, which have withdrawn a significant number of people the basis for a self-determined life in freedom.

Even though there has repeatedly come to severe violations of the Constitution of several countries, absolutely no efforts had been made to bring those responsible to justice.
Chances are pretty good that what has been described above is strongly related to what can be observed worldwide, where a growing number of people are forced into dependencies that can be best described as a modern form of slavery. The Global Architecture of Wealth Extraction - /The Rules. Corporate Profits Grow and Wages Slide. CORPORATE profits are at their highest level in at least 85 years. 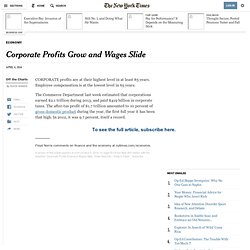 Employee compensation is at the lowest level in 65 years. The Commerce Department last week estimated that corporations earned $2.1 trillion during 2013, and paid $419 billion in corporate taxes. The after-tax profit of $1.7 trillion amounted to 10 percent of during the year, the first full year it has been that high. In 2012, it was 9.7 percent, itself a record. Until 2010, the highest level of after-tax profits ever recorded was 9.1 percent, in 1929, the first year that the government began calculating the number. Before taxes, corporate profits accounted for 12.5 percent of the total economy, tying the previous record that was set in 1942, when pushed up profits for many companies. The trend of higher profits and lower effective taxes has been gaining strength for years, but really picked up after the Great Recession temporarily depressed profits in 2009.

Continue reading the main story After-tax corporate profits Obama. There Was a Class War. The Rich Won It. Real 1982 goods producing wage earner hourly wage What happens if there’s a class war and only one side bothers to show up and fight it? 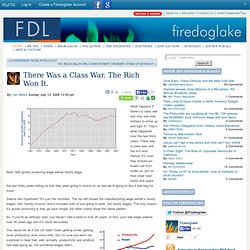 That’s what happened over the last thirty years. There was a class war, and the rich won. Period. It’s over, they kicked our knees out from under us, put on their steel toed boots and spent the last thirty years telling us that they were going to trickle on us and we’re going to like it and beg for more. This transatlantic trade deal is a full-frontal assault on democracy. Remember that referendum about whether we should create a single market with the United States? 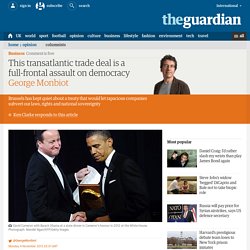 The democratic clock turned back. Financial markets rallied last week when the Greek prime minister, George Papandreou, announced he was dropping plans for a referendum on the terms of his country's bailout. 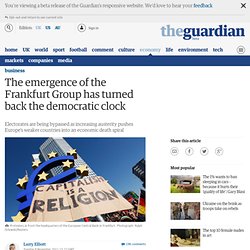 Bond dealers liked the idea that the government in Athens could soon be headed by Lucas Papademos, a former vice-president of the European Central Bank. Angela Merkel and Nicolas Sarkozy think Papademos is the sort of hard-line technocrat with whom they can do business. Silvio Berlusconi's long-predicted departure as Italy's prime minister will no doubt be greeted in the same way, particularly if he is replaced by a government of national unity headed by another technocrat, Mario Monti. Neo-liberal capture of the policy making process in Europe. Mainstream macroeconomics has mounted a range of arguments over the years to argue against any discretionary involvement by governments or regulators in the economy. 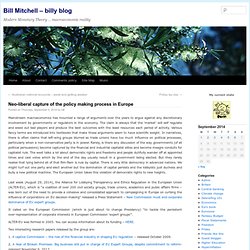 The claim is always that the ‘market’ will self regulate and weed out bad players and produce the best outcomes with the least resources each period of activity. Various fancy terms are introduced into textbooks that make these arguments seem to have scientific weight. In narratives, there is often claims that left-wing groups blurred as trade unions have too much influence on political processes, particularly when a non-conservative party is in power. Rarely, is there any discussion of the way governments (of all political persuasions) become captured by the financial and industrial capitalist elites and become meagre conduits for capitalist rule.

...can not be enforced without conquest of the power

Global capitalism and 21st century fascism. The crisis of global capitalism is unprecedented, given its magnitude, its global reach, the extent of ecological degradation and social deterioration, and the scale of the means of violence. 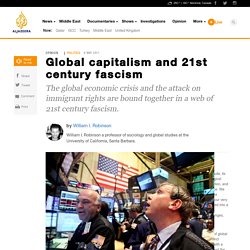 We truly face a crisis of humanity. The West's tragedy of capital. Here's a crash course on global finance 2.0. 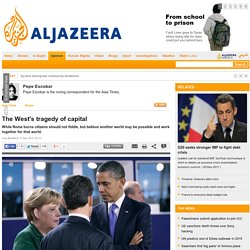 The debt is in the Atlanticist, wealthy North. The resources are in the global South. The Great Putsch: welcome to post-democratic Europe. Greece, Europe and the Neoliberal Nightmare: Is There a Way Out? Riot police attempt to put out a street fired during clashes with demonstrators protesting against austerity measures in Athens, Greece, Nov. 7, 2012. 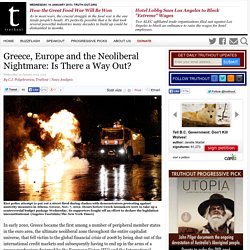 Hours before Greek lawmakers were to take up a controversial budget package Wednesday, its supporters fought off an effort to declare the legislation unconstitutional. (Angelos Tzortzinis/The New York Times) The EU-IMF rescue mechanism provided Greece in May 2010 with a massive loan package worth 110 billion euros (meant to cover the country's financial needs until June 2013) while a second one was extended in February 2012 worth 130 billion euros. Modern slavery affects more than 35 million people, report finds. More than 35 million people around the world are trapped in a modern form of slavery, according to a report highlighting the prevalence of forced labour, human trafficking, forced marriages, debt bondage and commerical sexual exploitation. 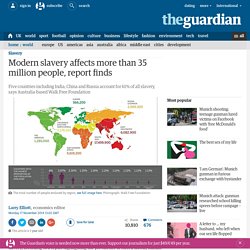 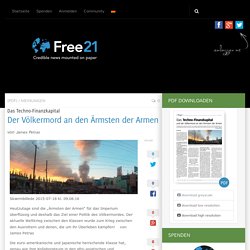