To read in spare time

Yuval Noah Harari on COVID-19: ′The biggest danger is not the virus itself′ Criticism Is My Love Language. I have filled a spray bottle with vinegar, like the instructions said, and coated the shower with it, but nothing is happening. 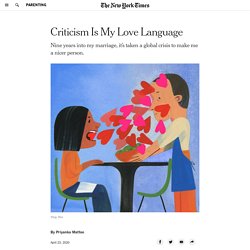 My toddler daughter bangs on the glass door with a box of Band-Aids, grumpy that I’ve stopped drawing shapes in the steam. “Heart!” Inside Stylist Maeve Reilly’s Closet - Coveteur. Before she sent Hailey Bieber down the aisle in that internet-breaking Off-White wedding gown, and before her #ProudStylist moments were all over Instagram, Maeve Reilly was a fashion-obsessed teen in NYC, looking forward to a summer of doing little else but hanging with her boyfriend before starting school at FIT. 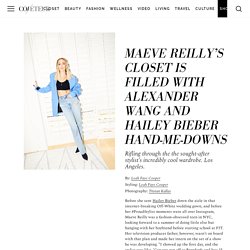 Her television producer father, however, wasn’t on board with that plan and made her intern on the set of a show he was developing. “I showed up the first day, and the stylist was like, ‘Can you run off to Bergdorfs and buy 15 pairs of brown pants?’ 'Need For Speed: Heat' Collabs With PUMA And Life's A Beach On Exclusive Drop.

Following on from the November 6 launch of Need For Speed: Heat launch at Hustlers' Market at Printworks (which featured appareances from Manchester rapper Aitch and Premier League players Callum Wilson, Nathan Ake, Josh King and Mamadou Sakho), PUMA and Life's A Beach have both linked up with Need For Speed: Heat to create some exclusive products which will also be wearable in-game. 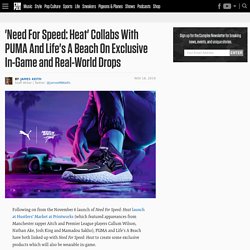 The PUMA Hi OCTN x NFS sneaker collab was designed to reflect the bold and colourful aesthetics of the game — dropping in a black upper with pink, purple and blue accents, and an all-white sole — as well as the game's emphasis on customisation and individuality. Guests at the launch night could even pick up the new exclusive sneaker straight out of the boot of some of the game's incredible supercars. Need For Speed: Heat will also give players the chance to dress their character in exclusive new garms from Life's A Beach, all designed to fit right in with the game's visual style.

How Overachieving Parents Can Avoid Ruining Their Kids’ Lives. Media Mogul, Necole Kane, Shares 5 Lessons She Learned After Successfully Rebuilding Her Company. The “future is female” may be a slogan that became popular on social media, but the state of women in business shows an undeniable progression towards making this statement a reality. 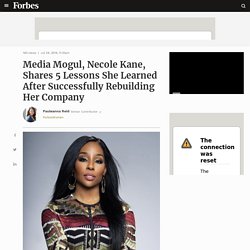 There are 11.6 million women-owned businesses, employing nearly 9 million people and generating more than $1.7 trillion in revenue. Despite this rapid growth, nothing can prepare someone for entrepreneurship. Between strategies to scale, brand acquisitions, pivoting from your initial business, feelings of loneliness and sometimes depression, there is a high cost for pursuing your vision. A price that some entrepreneurs have to pay for through a series of turbulent times and obstacles. Buy Low-Tops, Sell High-Tops: StockX Sneaker Exchange Is Worth $1 Billion. Personal development Archives - Courtney L. Sanders. Why Zoë Kravitz Has Had A Lot To Smile About Lately. Cultural Appropriation: Theft or Innovation? The Best Personal Finance Blogs You Should Follow. User Data and Cookie Consent. Kylie Jenner and Travis Scott on Love, Making It Work, and the Kardashian Curse. Why Will Smith's Revelation About Love Is Making All The Sense In My Marriage - xoNecole. 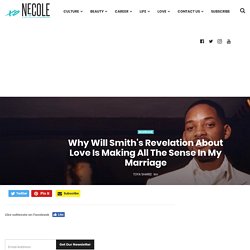 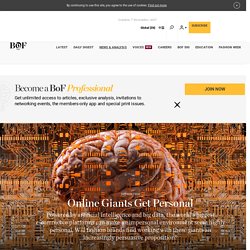 LONDON, United Kingdom — The rise of online platforms — Amazon, Alibaba, JD.com and Zalando, among others — has put fashion brands in a conundrum. While many have been sceptical about engaging with these online behemoths, for a growing number of fashion brands, these ubiquitous platforms have become a requisite sales channel now that their reach is so vast. This has only intensified as brands become increasingly aware they are no longer just competing with their peers, but also with social networks and streaming services — anything that engages users online — for attention.

Time. Movie stars are supposedly nothing like you and me. 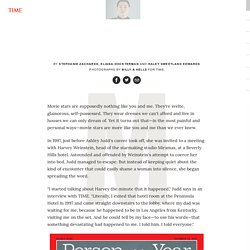 They're svelte, glamorous, self-­possessed. They wear dresses we can't afford and live in houses we can only dream of. Yet it turns out that—in the most painful and personal ways—movie stars are more like you and me than we ever knew. Andre 3000 GQ Style Interview 2017 October. Untitled. Chance the Rapper Opens Up About What It’s Like to Challenge Kanye West. When we got our Volume II: Music Issue cover star Chance the Rapper on the phone with Get Out writer-director Jordan Peele, an instant, irrepressible bromance was born. 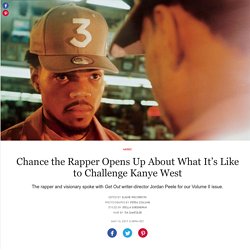 They’re both huge horror movie nerds. They’re both dads (or soon to be). And they’re both using their respective (critically acclaimed!) Talents to change the narrative on what it means to be Black and empowered in America today. In their cover conversation, the two talk about their heroes (Kanye, Dave Chappelle, Barack Obama), betting on yourself (in music, in film, in life), and shattering stereotypes through their art.

Arts & Culture - Is Iceland really the Equalia we dream of? Vigdís Finnbogadóttir may never have become President if it hadn’t happened. 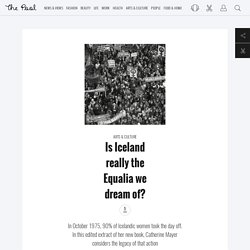 She pushed through the crowds with her mother and three-year-old daughter. A radical women’s group called the Red Stockings had originally proposed a women’s one-day strike. Log In - New York Times. Mahershala Ali, 'Moonlight' Breakout, on 'Melancholy' Childhood & Beyond. Mahershala Ali, just a few months ago, was all but unknown outside a small coterie in the entertainment industry. 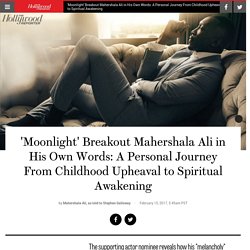 Despite more than a decade of solid credits in movies like The Hunger Games and such Netflix series as House of Cards and Luke Cage, the actor kept a low, paparazzi-less profile. That all changed with Moonlight, the low-budget drama about an African-American boy's odyssey to manhood, which became a sensation in August at the Telluride Film Festival and is nominated for eight Oscars. Playing the kindly drug dealer Juan, Ali drew notice as the film's breakout star (and further kudos in another best picture nominee, Hidden Figures), earning himself an Oscar nomination and winning a Screen Actors Guild Award for best supporting actor.

All about my mother: growing up with Franca Sozzani of Vogue Italia. The Gospel According To Kirk Franklin. The inspired third act of Kanye and Chance’s faithful favorite “Give me that power to walk away when another God takes your place,” Kirk Franklin intones on an early June evening in New Orleans. The lights have gone blue in the Orpheum Theatre; he’s on the sixth night of the southern leg of his 20 Years In One Night tour, which began in March. The 41-song career retrospective set is loosely arranged like a church service: First, nine exultant praise songs to wind the crowd up, and then the darker repertoire, the songs about human failure. Finery London - Caren Downie Interview. In terms of highstreet heavyweights, it doesn't get much bigger than the three women behind Finery London, one of our favourite affordable womenswear brands to emerge over the past couple of years. There's Emma Farrow who worked at Topshop for almost 15 years, heading up design at Topshop Unique, who was instrumental in making the megastore one of the most prominent brands in the market.

Then there's Rachel Morgans, a former head buyer at both ASOS and Topshop and finally Caren Downie, the former fashion director at ASOS, whose fast fashion expertise is unparalleled. Mashonda Tifrere's Journey to Finding Light in the Midst of Darkness. Mashonda Tifrere is working overtime. The Harlem native, who made a name for herself on the scene, had a lucrative career as an R&B artist spanning almost two decades with extensive appearances on songs by hip hop artists like Jay-Z, Cassidy, and the like. Why One Woman Chose To Embrace Polyamory In Her Marriage. I have a mostly traditional view of relationships and consider myself to be very monogamous by nature. Kim Kardashian West's GQ Cover Story: On Kanye and Taylor Swift, O.J.'s Bag, and Caitlyn Jenner. Inside, the house is serene and church-like in its soft echoes, though the walls are adorned with nightmarish paintings by George Condo, the artist who made Kanye's My Beautiful Dark Twisted Fantasy album art.

Shonda Rhimes: My year of saying yes to everything. Ericka Pittman: Diddy’s Right-Hand Woman Is Bringing Beauty & Brains to the Boardroom. What Happens to Your Brain on Sugar, Explained by Science. On the left is your brain on sugar. On the right side is your brain on drugs. The Weeknd & Lauryn Hill Rock The Stage Together On "Jimmy Fallon" Ty Dolla $ign has written the biggest song of the year and will happily fix your toilet - FACT Magazine: Music News, New Music. When Ty Dolla $ign starts speaking, his trademark raspy voice is so cracked I can barely understand a word he’s saying until he takes a couple seconds to clear his throat. The model princess who swapped glitz for culture.

2000s Nostalgia Young Millennials. 8 Martin Luther King Jr. quotes that don't sanitize his legacy. I Did a 30-Day Prayer Challenge & This is What Happened. Off The Record: Charlamagne Tha God On Being A Husband, Father And Executive Producer. What It Means to See Black Women on the Forbes #30Under30 List. 'Don't Be A Wife To A Boyfriend': 10 Lessons I Learned When I Was Single. Kahlana Barfield. New highs for global drug policy. Learn. The Women of Hollywood Speak Out. So THIS Is Why Shonda Rhimes & Oprah Say They Will NEVER Get Married. How to Rock a Weave Without Losing Your Edges! 30 Women Under 30 Who Are Changing The World. Jesse Williams: 'Celebrity culture? I am not going to participate in that' These artworks perfectly sum up London’s housing woes. Michael B. Jordan on Hustling in Hollywood.

Irene Agbontaen of Taller Than Your Average - My Big Idea #1 by My Big Idea. Beauty & The Beast Spoof - Bonjour, Girl! on Perez TV. 10 Designers Share Their Favorite IKEA Pieces. Inside Frip Ethique. Jourdan Dunn At Home Film Funny Video VogueTV. Women in Enterprise. Get product to market via the ASOS Marketplace. Don't hire a financial advisor until you do this. Rick Warren shares the good news about weight-loss plan. The Motley Fool UK » Free Report – 10 Steps To Making A Million In The Market. Victoria Beckham answers Vogue’s 73 questions: Find out why she doesn’t smile and what her perfect date involves. What 2015 has in store for house prices. Slang Definitions - ID Magazine Video. Top tips to succeed in the fashion industry. Exercise For Health Short Workouts.

Kanye West, The Pope, Rick Warren, and Our Tendency To Root Against People - Jordan Kranda. Emmanuelle Alt: 'I don't want to be an image' 21 Reasons Why Some People Get So Lucky in Life  Miss Moss. Ten tips for buy-to-let. Landlords are paying too much tax. Buying property to make a profit. The young, skint and self-employed need a radical new labour market. Fast Fashion - Zara HM The Cost Of Cheap Clothing. New York 4-Year-Olds Take This Test To Enter Elite Kindergarten. The best apps to make and save you money. Five common personal finance mistakes. Articles about Rudolph Henderson. What to Do When You’re Waiting on God. Rent a property: Tips to help if you're renting Money Saving Expert.