Sangram Deadly Trap For Pragya: Guesskaro. Will Abhi be able to save Pragya from Sangram's deadly trap in Kumkum Bhagya? 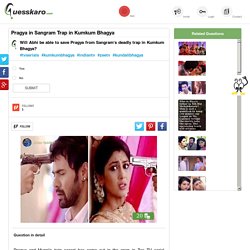 Question in detail Pragya and Munni's twin secret has come out in the open in Zee TV serial Kumkum Bhagya. Now, all that will catch your attention in the upcoming episode is Sangram's deadly trap for Pragya. Currently, Pragya is seen fighting for her life as she is in comma. As reported earlier, Pragya would return to Abhi's life. Munni, on the other side, is feeling connected to Abhi despite knowing the fact that he loves Pragya from the depth of his soul and heart. 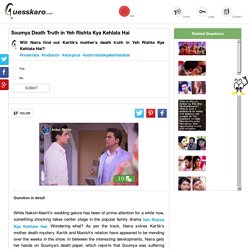 Question in detail While Naksh-Keerti's wedding galore has been of prime attention for a while now, something shocking takes center stage in the popular family drama Yeh Rishta Kya Kehlata Hai. Wondering what? As per the track, Naira solves Kartik's mother death mystery. Kartik and Manish's relation have appeared to be mending over the weeks in the show. Naira decides to bring the truth to Kartik's notice, but Dadi hides the paper and stops Naira.

Manish and Swarna, on the other side, are worried of Kartik's mother death mystery getting disclosed. Tej and Swetlana Plan Against Jhanvi: Guesskaro. Will Jhanvi be able to expose Tej and Swetlana's evil plan in Ishqbaaz? 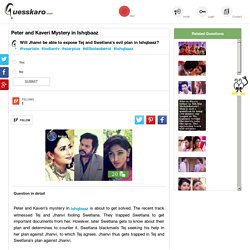 Question in detail Peter and Kaveri's mystery in Ishqbaaz is about to get solved. The recent track witnessed Tej and Jhanvi fooling Swetlana. They trapped Swetlana to get important documents from her. However, later Swetlana gets to know about their plan and determines to counter it. Swetlana asks Tej to disguise as Peter and plots herself as Kaveri D'souza. Sanju Past Enmity With Pragya: Guesskaro. Will destiny again bring Rishabh in Preeta's rescue in Kundali Bhagya? 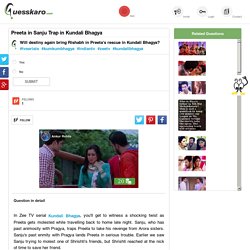 Question in detail In Zee TV serial Kundali Bhagya, you'll get to witness a shocking twist as Preeta gets molested while travelling back to home late night. Sanju, who has past animosity with Pragya, traps Preeta to take his revenge from Arora sisters. Karan Preeta and Rishabh Love Triangle: Guesskaro. Will Rishabh leave Preeta for her happiness in Kundali Bhagya? 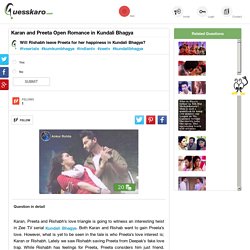 Question in detail. Shivaay Marriage Announcement Before Media in Ishqbaaz: Guesskaro. Will Ragini concede her defeat allowing Shivaay and Anika to remarry in Ishqbaaz? 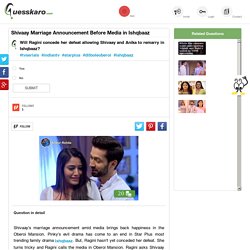 Question in detail Shivaay's marriage announcement amid media brings back happiness in the Oberoi Mansion. Pinky's evil drama has come to an end in Star Plus most trending family drama Ishqbaaz. But, Ragini hasn't yet conceded her defeat. Mahi and Shivaay Truth in Ishqbaaz: Guesskaro. Will Shivaay and Anika lead a happy life post Pinky and Kamini's conspiracy gets revealed? 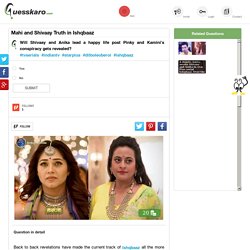 Question in detail Back to back revelations have made the current track of Ishqbaaz all the more engaging. Of late in the show, Pinky revealed that Shivaay is not illegitimate. Pinky unveils that she had lied to Anika and her intention behind lying was to expel Anika from Oberoi Mansion. Last but not least, she vomits that Shivaay and Mahi are not real brothers. Shree Ganesha Celebration in Kumkum Bhagya. Is that when Abhi and Pragya will reunite in Kumkum Bhagya? 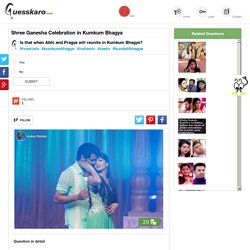 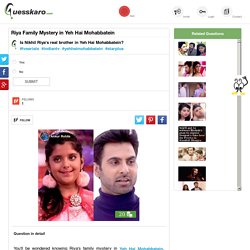 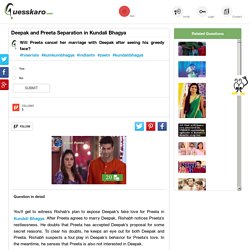 Question in detail You'll get to witness Rishab's plan to expose Deepak's fake love for Preeta in Kundali Bhagya. After Preeta agrees to marry Deepak, Rishabh notices Preeta's restlessness. He doubts that Preeta has accepted Deepak's proposal for some secret reasons. To clear his doubts, he keeps an eye out for both Deepak and Preeta. Pragya Return in Abhi Life in Kumkum Bhagya: Guesskaro. Will Abhi be able to locate Pragya in Kumkum Bhagya? Question in detail A visual delight will be up for grab with Pragya's re-entry in Kumkum Bhagya. Sources reveal that Abhi will soon get to the bottom of Pragya and Munni's twin mystery. Once the mystery gets resolved, the long-separated couple will again embark on a happy journey filled with love and fondness. Abhi will discover Munni's reality and will belt along his search for Pragya.

Of late we have seen Sangram creating lot of fuss in Purab and Disha's wedding. Keerti Refuses To Marry Naksh in Yeh Rishta Kya Kehlata Hai: Guesskaro. Will Keerti break his wedding with Naksh in Yeh Rishta Kya Kehlata Hai? Question in detail All that will leave you shocked in YRKKH upcoming episode is Keerti's drastic step for Naksh. As per the track, Keertik refuses to marry Naksh in a major move. Naksh is broken with Keerti's decision, but hasn't much to do about it. Ragini Deadly Attack on Anika: Guesskaro. Will Shivaay be able to save Anika from Ragini's deadly attack? Question in detail A drastic havoc awaits Shivaay and Anika in Star Plus serial Ishqbaaz.

Over the weeks, the show has brought a couple of secrets into open much to Shivaay-Anika's shock. Shivaay is shattered knowing about his fake illegitimate truth. Anika, too, is failing to digest Pinky's evil reality that is disclosed now. Disha and Aaliya Confrontation For Purab Love: Guesskaro. Is that why Disha refuses to marry Purab in Kumkum Bhagya? Question in detail Here's why Disha refuses to marry Purab in Zee TV serial Kumkum Bhagya. With twists hanging around, Purab and Disha's marriage faces an unexpected delay due to psycho Aaliya. Of late we saw evil Sangram attacking Purab and Abhi's family to forcefully marry Disha.

Despite the ball rolling in Sangram's court, Purab and Abhi succeed saving Disha from Sangram. Just when things seem to be getting sorted, there happens something drastic to postpone Purab-Disha's marriage. Aaliya gets irked as Purab has risked his life for rescuing Disha. Naira Pregnancy Drama in Yeh Rishta Kya Kehlata Hai. Will Kartik and Naira enlighten Goenka's about Naira's fake pregnancy truth?

Question in detail Pregnancy drama in Yeh Rishta Kya Kehlata Hai has much more in store to keep the viewers hooked. As per the latest reports, Kartik and Naira get Naira's pregnancy report, which shockingly results in negative. Kartik consoles Naira not to worry as he has no complaint against her. Furthermore, they decide to plan for family soon. Kartik and Naira are in the dilemma of revealing Naira's pregnancy report to the family. Bhavya Mission To Catch Sultan: Guesskaro. Deepak Marriage Proposal to Preeta: Guesskaro. Munni Plan To Save Pragya in Kumkum Bhagya: Guesskaro. Rudra First Marriage in Ishqbaaz: Guesskaro.