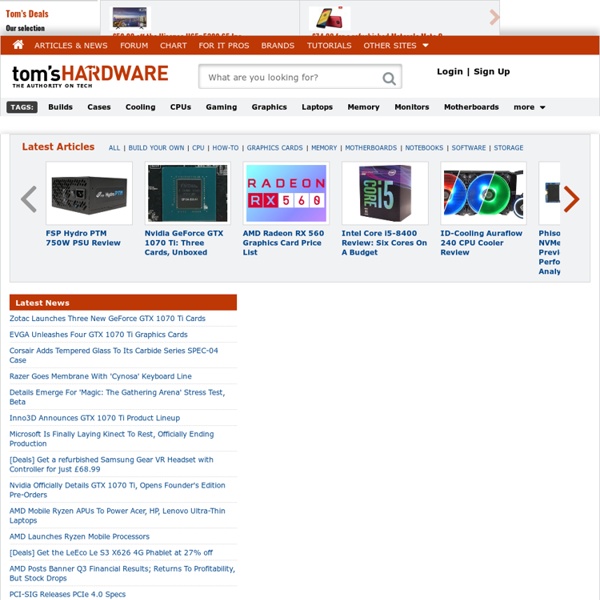 Slow computer? 10 ways to make it run faster 2) Automatically delete temporary files Temporary files amass on your computer through everyday tasks and can remain on your hard disk, slowing the computer down. Getting rid of these files, including your internet history and cookies, should give you a larger amount of hard disk space, speeding up your PC. To do this, open “My Computer”, and select your local drive (usually C:\).

C++ Recursion | Talk Binary Recursion in C++ is a function with a set of rules designed to reduce a problem into a smaller one called a base case. This may be referred to as the divide and conquer method since the idea is to solve a complex problem by solving the smaller instances of it. A classic example is the factorial function, which we’ll discuss later. Recursive function that displays numbers

IllumiRoom takes video games beyond the TV IllumiRoom is a proof-of-concept from Microsoft Research that aims to bring gaming out of your TV and into your personal space Image Gallery (5 images) The way we play video games is forever evolving. Nintendo brought motion control to the masses with the Wii, while the rise of smartphones and tablets has meant the number of casual games (and casual gamers) has grown exponentially over the past few years. What is next on the agenda? The signs all point towards a more immersive experience being the main aim and Microsoft Research is keen to lead the way with IllumiRoom.

Unity/Lenses/Ideas Unity Lenses are a cool new Unity technology that allow you to make mash ups of elements that integrate with the Dash and Launcher. An example of a Lens is Seif's People Lens: In short, a Lens is something a user will access from either search or via a dedicated button on their launcher.

How to Replace or Upgrade Laptop Memory A computer’s memory (called RAM) is one of the simpler components to replace or upgrade. Increasing the amount of memory is one of the most cost-effective ways to breathe life into an older system and extend its usefulness. We show you start to finish how to replace memory modules in a notebook computer in this guide. C++ While Loop | Talk Binary In our previous tutorial, we learned about C++ If Statements which introduced us to the idea of control flow and conditions. Today, we introduce the while loop. The While Loop The while loop is another control flow structure that allows the programmer continuously execute a block of instructions until a specific condition is met. Below is an example of a program that contains a while loop.

Project Fiona gaming tablet coming to market as Razer Edge If you followed last year's CES, you'll likely remember Razer's Project Fiona prototype gaming tablet. Gamers salivated, and it won numerous "Best of CES" awards. But then it missed its estimated "late 2012" ship date, and many wondered if it would ever see the light of day. Well, Razer followed through at CES 2013, announcing that the Windows 8 tablet will launch soon as the Razer Edge. View all We put your privacy first At Mozilla, we have a long history of taking privacy seriously. It’s front and center in every piece of software we make. It's in our Manifesto. Is Facebook down? Status on problems Is Facebook down today? When there is problems, millions around the world know about it and this is due to the fact that this social network has over one billion mobile users alone. They login while at home and on the move, so the most common Facebook problems involve trying to sign-in on computers and mobile devices, issues with uploading pictures, blank white pages, or a total blackout when Facebook is down from time-to-time.

C++ Do While Loop | Talk Binary The Do While Loop is different from the While Loop for one reason only. The condition is checked after executing the statements. Therefore, this loop guarantees that the statements will be executed at least once. 100+ Google Tricks That Will Save You Time in School - Eternal Code [via onlinecolleges.net] With classes, homework, and projects–not to mention your social life–time is truly at a premium for you, so why not latch onto the wide world that Google has to offer? From super-effective search tricks to Google hacks specifically for education to tricks and tips for using Gmail, Google Docs, and Google Calendar, these tricks will surely save you some precious time. Search Tricks These search tricks can save you time when researching online for your next project or just to find out what time it is across the world, so start using these right away. Convert units.

Quick CSS Trick: How To Center an Object Exactly In The Center I recently needed to make a placeholder page for a site. I wanted the logo image to be centered exactly in the middle of the screen, that is, both vertically and horizontally centered. Quickly, I thought I'd just give the image element a class of "centered" and then style that class: But as I'm sure you are thinking, this doesn't quite work. What that accomplishes is putting the upper left corner of image exactly in the center of the page, not the center of the image in the center of the page. In order to get the image exactly centered, it's a simple matter of applying a negative top margin of half the images height, and a negative left margin of half the images width.

Unbreakable: The second world war's last Enigma - physics-math - 30 May 2011 Read more: "Unbreakable: Eight codes we can't crack" The second world war brought a shift from handwritten cryptography to machines capable of spinning up complex, ever-changing codes. The best known of these was the Enigma machine, first used by the German navy in 1926. Enigma machines used three or four mechanical rotors to scramble electrical circuits that assigned the letters of the message to be encrypted into letters of coded text.