American Gods (TV series) - Wikipedia. The series will focus on the mysterious Shadow Moon, a man serving three years in prison for assault. 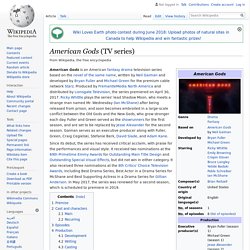 With only days remaining in his sentence, Shadow is given an unexpected early release after his beloved wife Laura is killed in a car accident. Flying home for the funeral, Shadow is seated next to a man calling himself Wednesday, who offers Shadow a job he seems all too confident that Shadow will accept. Arriving home, Shadow finds that the life he thought was waiting for him is gone. With no other options, he accepts Wednesday's offer. At first, it appears that Wednesday is nothing but a con artist who runs scams for cash and needs Shadow as a collaborator and bodyguard. 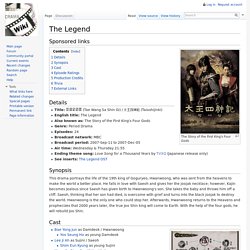 He falls in love with Saeoh and gives her the joojak necklace; however, Kajin becomes jealous since Saeoh has given birth to Hwanwoong's son. Cast The Legend Cast Extended Cast Episode Ratings Source: TNS Media Korea Production Credits Trivia The production cost was estimated to be around 45 billion won.The filming of this drama started in March of 2006. External Links. House M.D. (TV Series 2004–2012) Defiance (TV Series 2013– ) How to Get Away with Murder (TV Series 2014– ) In the Flesh (TV Mini-Series 2013) Lost (TV Series 2004–2010) Shine a Light Rose: Kdrama Review: Nine: Nine Times Time Travel (2013) 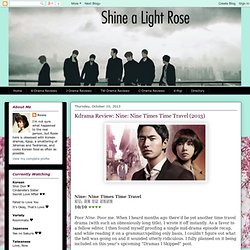 Poor me. When I heard months ago there’d be yet another time travel drama (with such an obnoxiously long title), I wrote it off instantly. As a favor to a fellow editor, I then found myself proofing a single mid-drama episode recap, and while reading it on a grammar/spelling only basis, I couldn’t figure out what the hell was going on and it sounded utterly ridiculous. I fully planned on it being included on this year’s upcoming “Dramas I Skipped” post. Then it ended, and the blogosphere exploded. And I suddenly thought, “Did I just miss out on something spectacular??” For those of you who’ve seen it, you’ll probably scream out YES. What’s the Story? Lee Jin Wook (I Need Romance 2012) plays Park Sun Woo, a super sexy news anchorman with a super cute, though not sexy almost girlfriend Joo Min Young (Jo Yoon Hee).

And, I seriously can’t say anything else about the plot unless you want to be ridiculously spoiled. Since I finished the drama, I can’t let it go. Parallel Dimensions. Shine a Light Rose: Kdrama Review: Nice Guy (2012) Nice Guy; Innocent Man 세상 어디에도 없는 차칸남자9/10 ♥♥♥ It’s 3:00 am in the morning, and I can’t sleep. 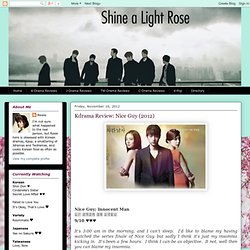 I’d like to blame my having watched the series finale of Nice Guy, but sadly I think it’s just my insomnia kicking in. It’s been a few hours. I think I can be as objective. Nice Guys Finish Last. This makes me want to review how I even come up with ratings. Nice Guy meant a whole lot to me. I’ll try to move from the vague to the specific: Let’s start with Song Joong Ki, our starring role. Let’s talk about the ending for a minute. Is there such a thing as nice guys? Shine a Light Rose: Cdrama Review: Bu Bu Jing Xin (2011) And if you have already, read on for a short series of essays on Bu Bu Jing Xin. :) WARNING: Major Spoilers - Stop reading now unless you've finished the drama and are majorly obsessed with it. 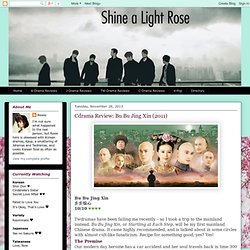 Like me. Add the costumes and you’re eyes will be feasting on the most delicious details in every scene. From women’s dresses to the prince’s wardrobes, hair styles, ornaments and jewelry, everything aids the scene, the story, or the overall feel. The best part is that the drama KNOWS its sets are stunning. One pretty backdrop doesn’t necessarily create a beautiful effect all on its own. I know next to nothing about filming and editing, but it’s no hard task to say that BBJX does this well.