Littérature. Digital. Design. TV. Movies. HTTP 404. The web site hosting server will typically generate a "404 Not Found" web page when a user attempts to follow a broken or dead link; hence the 404 error is one of the most recognizable errors encountered on the World Wide Web. 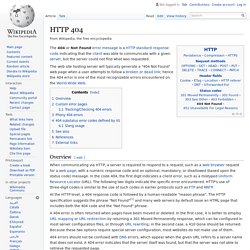 Overview[edit] When communicating via HTTP, a server is required to respond to a request, such as a web browser request for a web page, with a numeric response code and an optional, mandatory, or disallowed (based upon the status code) message. In the code 404, the first digit indicates a client error, such as a mistyped Uniform Resource Locator (URL). The following two digits indicate the specific error encountered. HTTP's use of three-digit codes is similar to the use of such codes in earlier protocols such as FTP and NNTP. Le top 30 des agences interactives françaises. Grâce aux lecteurs fidèles et aux lecteurs d’un jour de ce blog, mon top 20 des agences interactives françaises s’est enrichi. 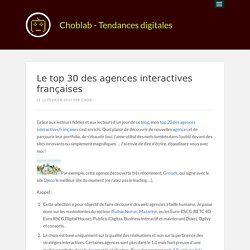 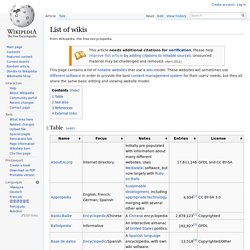 These websites will sometimes use different software in order to provide the best content management system for their users' needs, but they all share the same basic editing and viewing website model. Bobcat Goldthwait. Early life[edit] Goldthwait was born Robert Francis Goldthwait on May 26, 1962 in Syracuse, New York, the son of Kathleen Ann (Welch), a department store employee, and Thomas Lincoln Goldthwait, a sheet metal worker.[1][2] He was raised in a Catholic working-class family.[3] At an early age, Goldthwait decided on a career as a comedian and was performing professionally while still in high school at age 15. 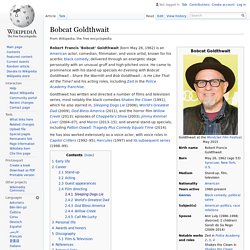 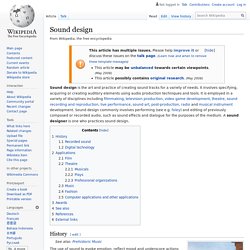 At its earliest, it was used in religious practices for healing or recreation. In ancient Japan, theatrical events called kagura were performed in Shinto shrines with music and dance.[1] Suburgatory. Premise[edit] The series follows George Altman, a single father who decides to get away from New York City to the suburbs so he can give his teenage daughter, Tessa, a better life. 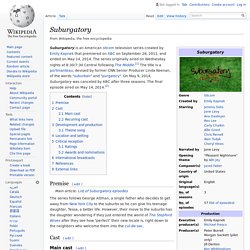 However, their move to the suburbs has the daughter wondering if they just entered the world of The Stepford Wives after they see how "perfect" their new locale is, right down to the neighbors who welcome them into the cul-de-sac. List of Google products. News aggregator. Function[edit] Visiting many separate websites frequently to find out if content on the site has been updated can take a long time. 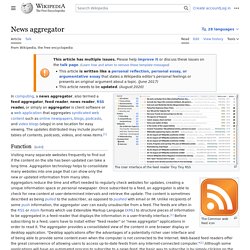 Aggregation technology helps to consolidate many websites into one page that can show the new or updated information from many sites. Aggregators reduce the time and effort needed to regularly check websites for updates, creating a unique information space or personal newspaper. Once subscribed to a feed, an aggregator is able to check for new content at user-determined intervals and retrieve the update. The content is sometimes described as being pulled to the subscriber, as opposed to pushed with email or IM. Category:Literature websites. Content curation. Content curation is the process of gathering information relevant to a particular topic or area of interest, usually with the intention of adding value through the process of selecting, organizing, and looking after the items in a collection or exhibition.[1] Services or people that implement content curation are called curators. 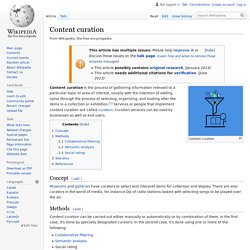 Curation services can be used by businesses as well as end users. Concept[edit] Museums and galleries have curators to select and interpret items for collection and display. There are also curators in the world of media, for instance DJs of radio stations tasked with selecting songs to be played over the air. Category:Lists of websites.

Category:Websites. The main article for this category is Website. 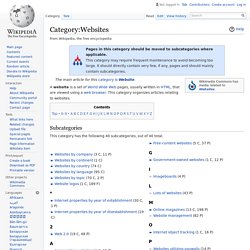 A website is a set of World Wide Web pages, usually written in HTML, that are viewed using a web browser. This category organizes articles relating to websites. Subcategories This category has the following 40 subcategories, out of 40 total. Google Bookmarks. Answer three questions and help us improve Wikipedia. 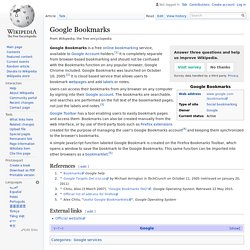 Thanks for the feedback! We are using it to make Wikipedia even better! Users can access their bookmarks from any browser on any computer by signing into their Google account. The bookmarks are searchable, and searches are performed on the full text of the bookmarked pages, not just the labels and notes.[3] Google Toolbar has a tool enabling users to easily bookmark pages and access them. Category:Internet-related lists. Alexa Internet. American analytics company providing web traffic data Alexa was founded as an independent company in 1996 and acquired by Amazon in 1999. Its toolbar collects data on Internet browsing behavior and transmits them to the Alexa website, where they are stored and analyzed.

This is the basis for the company's web traffic reporting, including its Alexa Rank.[4] According to its website, Alexa provides web traffic data, global rankings, and other information on 30 million websites.[5] As of 2018, its website is visited by over 3 million people every month.[3] Operations and history[edit] Category:Social cataloging applications. Digg. Social media/news aggregator website Digg is an American news aggregator with a curated front page, aiming to select stories specifically for the Internet audience such as science, trending political issues, and viral Internet issues. It was launched in its current form on July 31, 2012, with support for sharing content to other social platforms such as Twitter and Facebook.

It formerly had been a popular social news website, allowing people to vote web content up or down, called digging and burying, respectively. In 2012, Quantcast estimated Digg's monthly U.S. unique visits at 3.8 million.[8] Digg's popularity prompted the creation of similar sites such as Reddit.[9] In July 2008, the former company took part in advanced acquisition talks with Google for a reported $200 million price tag, but the deal ultimately fell through.

List of photo-sharing websites. From Wikipedia, the free encyclopedia This is a non-exhaustive list of major image-sharing websites. Active image-sharing websites Defunct photo-sharing websites These also include sites that may still operate, but do not accept new users. Listed in chronological order of shutdown. 500px. 500px, pronounced five hundred pixels,[2] is a Canadian online photography community[3][4] and marketplace[5] that was co-founded by Oleg Gutsol and Evgeny Tchebotarev (artistically also known as “Ian Sobolev”).[6] The Toronto based startup[7] launched its Web 2.0 version in 2009[8] and is aimed at aspiring and professional photographers;[9] encouraging members to upload their best work.[10] In August of 2015, the company launched a new version of its iOS app.[11] 500px is seen as a place to gain exposure, find inspiration and connect photographers with one another.[12] As of August 2015[update], the site had 6 million users.[13] History[edit] 500px headquarters in Toronto Tchebotarev joined forces with Oleg Gutsol and in early 2009[15] they began work on the mostly automated incarnation of 500px.

Image size grew to 900 pixels but the name remained. DeviantArt. DeviantArt, Inc. is headquartered in the Hollywood area of Los Angeles, California, United States.[2] Fella, a small, devilesque robotic character, is the official mascot.[3] The domain deviantart.com had at least 36 million visitors annually by 2008.[4] By 2010, DeviantArt users were submitting over 1.4 million "favorites" and 1.5 million comments daily.[5] As of July 2011[update], it was the 13th largest social network with 3.8 million weekly visits.[6] As of March 2013[update], the site had over 25 million members and 246 million submissions,[7] and was receiving around 140,000 submissions per day.

History[edit] DeviantArt started as a site connected with people who took computer applications and modified them to their own tastes, or who "deviated" the applications from the original designs. DeviantArt ran for 7 years without any additional investment besides the initial US$15,000 from its founders at the moment of its founding. Category:Internet culture. Internet meme. Category:Image hosting. Category:Internet memes.