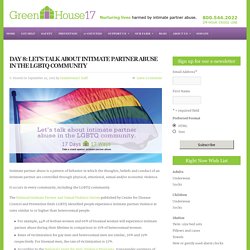 Rape Survey Image - Fear Us. 30 Shocking Domestic Violence Statistics That Remind Us It's An Epidemic. The number of American troops killed in Afghanistan and Iraq between 2001 and 2012 was 6,488. 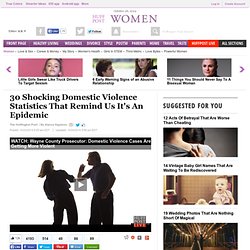 The number of American women who were murdered by current or ex male partners during that time was 11,766. That's nearly double the amount of casualties lost during war. Women are much more likely to be victims of intimate partner violence with 85 percent of domestic abuse victims being women and 15 percent men. Too many women have been held captive by domestic violence -- whether through physical abuse, financial abuse, emotional abuse or a combination of all three. We are inundated with news stories about domestic violence , from athletes beating their significant others in public elevators or in their own homes to celebrities publicly abusing their girlfriends. As Domestic Violence Awareness Month comes to an end, discussions about intimate partner abuse and its horrible repercussions should not. The number of women murdered every day by a current or former male partner in the U.S. 1 in 4 2.6x.

TAC Power and Control Wheel.pdf. Twitter Responds To Santa Barbara Shootings With #YesAllWomen Hashtag. Recherche - #YesAllWomen. Sex Violence Against Women Ads. "Nice legs, get in the trunk": Thousands of women experience street harassment on a daily basis - but now they are #shoutingback. 'Nice legs', 'Hey sexy lady', 'Now I know where you live', 'Get in the trunk, bitch'. 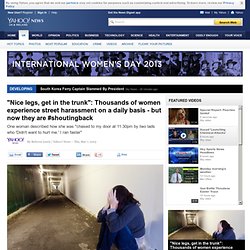 For many women and teenage girls these remarks are not a rare but a daily occurrence. Coupled with lewd remarks and gropings comes a prevailing attitude that this is simply something women should put up with. And while many might consider such boorish behaviour verging on the criminal as a relic of yesteryear it is a daily blight on the lives of many in Britain today. Laura Bates, 26, set up the project to document the everyday harassment and sexism women are forced to put up with … Bullying: Can we teach kids to stop being bystanders? Photo by VBStock/iStockphoto/Thinkstock One of the most frustrating facts about bullying is this: In the vast majority of cases, it takes place in front of an audience of other kids—88 percent of the time, according to one study. 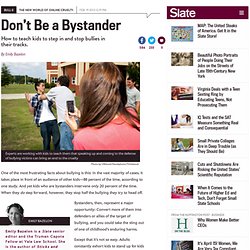 And yet kids who are bystanders intervene only 20 percent of the time. When they do step forward, however, they stop half the bullying they try to head off. Ten Things to End Rape Culture. Rape culture exists because we don't believe it does. 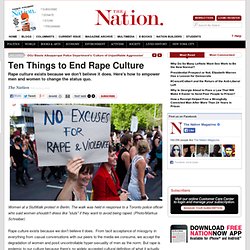 Here's how to empower men and women to change the status quo. Women at a SlutWalk protest in Berlin. The walk was held in response to a Toronto police officer who said women shouldn't dress like "sluts" if they want to avoid being raped. (Photo/Markus Schreiber) Rape culture exists because we don't believe it does. 7 Steps You Can Take To Address Street Harassment. I used to think that that sexual harassment in public was so entrenched, such a part of the fabric of our culture, that it was unchangeable. 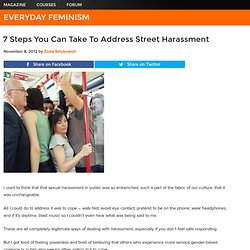 All I could do to address it was to cope – walk fast; avoid eye contact; pretend to be on the phone; wear headphones, and if it’s daytime, blast music so I couldn’t even hear what was being said to me. These are all completely legitimate ways of dealing with harassment, especially if you don’t feel safe responding. But I got tired of feeling powerless and tired of believing that others who experience more serious gender-based violence in public also see no other option but to cope. I decided to take the lead on organizing a march and rally in Washington, DC to protest street harassment.

NO MORE - Together we can end domestic violence and sexual assault. Watch "Every Fucking Day of My Life. Dating Abuse: Teens Start Talking. A resource for men who have experienced sexual abuse or assault. RAINN: The nation's largest anti-sexual assault organization.One of “America’s 100 Best Charities" —Worth magazine. Unbreakable. You may have noticed that Project Unbreakable has been pretty quiet lately. 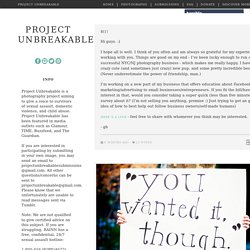 For a few months now, those of us at Unbreakable have been making some pretty big life changes, and we have had to figure out where Unbreakable is placed. It has been a very long and incredible journey, but we are saddened to say that we will be closing our doors. We will finish posting all the submissions we have, but after we run out, we are no longer going to be accepting submissions for the website (but everything will remain up – we aren’t deleting anything.)

We hope you understand, and we are grateful for your support. A note from Grace: I can’t really sum up almost 4 years of doing this project and I am having a very difficult time writing this. I would be lying if I said that the rumors from other activists about my integrity didn’t get to me. But that is not why I am leaving the project. Please take care of yourselves. A note from Christina: The VIP Center (Violence Intervention and Prevention Center) Step UP! A Prosocial Behavior / Bystander Intervention Program for Students. Aishah Shahidah Simmons Biographical Sketch. Aishah Shahidah Simmons is an award-winning African-American feminist lesbian independent documentary filmmaker, television and radio producer, published writer, international lecturer, and activist based in Philadelphia, PA. 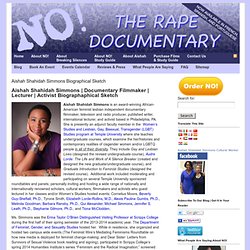 She is presently an adjunct faculty member in the Women’s Studies and Lesbian, Gay, Bisexual, Transgender (LGBT) Studies program at Temple University where she teaches under/graduate courses, which examine the her/histories and contemporary realities of cisgender women and/or LGBTQ people in all of their diversity. They include Gay and Lesbian Lives (designed the revised undergraduate course), Audre Lorde: The Life and Work of A Silence Breaker (created and designed the new graduate/undergraduate course), and Graduate Introduction to Feminist Studies (designed the revised course).

Ms. Simmons was the Erma Taylor O’Brien Distinguished Visiting Professor at Scripps College during the first half of their spring semester of the 2013-2014 academic year. Ms. NO! Ms.