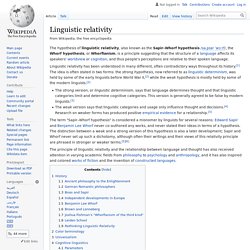 The hypothesis of linguistic relativity, also known as the Sapir–Whorf hypothesis , the Whorf hypothesis, or Whorfianism, is a principle suggesting that the structure of a language affects its speakers' worldview or cognition, and thus people's perceptions are relative to their spoken language. Linguistic relativity has been understood in many different, often contradictory ways throughout its history. The idea is often stated in two forms: the strong hypothesis, now referred to as linguistic determinism, was held by some of the early linguists before World War II,[2] while the weak hypothesis is mostly held by some of the modern linguists.[2] The strong version, or linguistic determinism, says that language determines thought and that linguistic categories limit and determine cognitive categories.

Overview[edit] 5 Scandinavian Life Philosophies That Can Make You Happier. Why Do People Say "Like" So Much? Like, I’ve been doing this podcast for, like, eight years now, but there’s, like, one language peeve that I’ve never thought to write about, so when a listener asked me about it, I was, like, “I can’t believe we’ve never covered this before!” 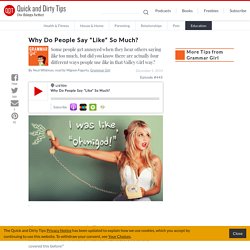 Not All Likes are Alike As you’ve probably guessed by now, the complaint is about the overuse of the word like. However, before we can talk about that, we need to draw a few distinctions, because not all likes are alike. For example, if I were to say, “I don’t like this hat; it makes me look like a mushroom,” even the most conservative speakers would have no problem with like as a verb in I don’t like this hat, or like as an adjective in look like a mushroom. The verb like and the adjective like are separate words. 15 Pleasantries People No Longer Say. Should You Put One or Two Spaces After a Period? In fairness to the researchers, Johnson told Lifehacker that Courier New is standard for eye-tracking tests, because other tests on text spacing have found no significant difference between reading monospace and reading proportional fonts. 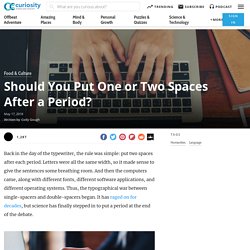 The team also wrote that the major reason to use two spaces was to make the reading process smoother, not faster. This explains why reading comprehension was unaffected, regardless of how many spaces followed a period. But since everyone tended to spend less time staring at periods that were followed by a bit of extra white space, science has ensured that this debate will rage for another period of human history ... or two. Shambolic - definition of shambolic by The Free Dictionary. The weird reason Danes speak better English than Germans do. Quartz Obsession, January 4, 2019. Quartz Obsession, December 28, 2018. Definition of Suasion by Merriam-Webster. Comma Queen: A Grammarian’s Xmas Gripes. We sticklers are in fine fettle (cliché!) 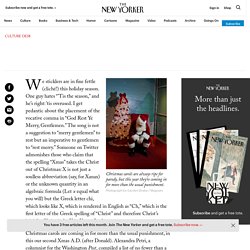 This holiday season. Howling Fantods (episode #1513) Are there words and phrases that you misunderstood for an embarrassingly long time? 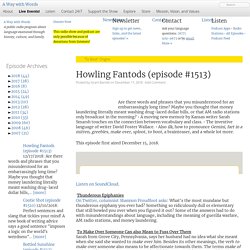 Maybe you thought that money laundering literally meant washing drug-laced dollar bills, or that AM radio stations only broadcast in the morning? • A moving new memoir by Kansas writer Sarah Smarsh touches on the connection between vocabulary and class. • The inventive language of writer David Foster Wallace. • Also ilk, how to pronounce Gemini, fart in a mitten, greebles, make over, sploot, to boot, a brainteaser, and a whole lot more. Escher Sentences Make Sense, Even Though They Shouldn't.

"The man pushed through the door fell. 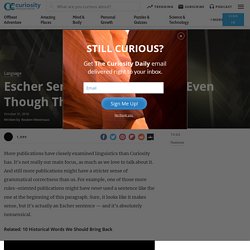 " This is one of the hardest ones to read, but reframe it in a conversation, and it makes sense. "Who fell? " "The man pushed through the door. ""The cotton clothing is made of grows in Mississippi. " The conversation trick works again. As you can see, garden-path sentences generally work by fooling you with words that have multiple meanings, set in familiar-sounding ways that actually function as different parts of the sentence structure. Trump derangement syndrome. Neologism describing irrational reactions to Donald Trump's statements Trump derangement syndrome (TDS) is a neologism describing a reaction to United States President Donald Trump by liberals, progressives, and anti-Trump conservatives, who are said to respond to Trump's statements and political actions irrationally and with little regard to Trump's actual position or action taken.[1] The term has been used to discredit criticism of Trump's actions.[2] Origin of term[edit] The origin of the term is traced to political columnist and commentator Charles Krauthammer, a psychiatrist, who originally coined the phrase Bush derangement syndrome in 2003 during the presidency of George W. 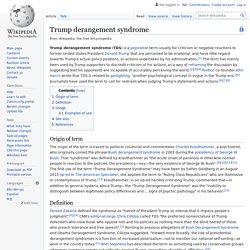 A radio program and podcast about language. What's So Wrong With "Nice"? - Everything After Z by Dictionary.com. The 9 terms and phrases you need to know if you think you're being manipulated. Where to put hyphens. Pottu (decoration) Ajna chakra has two lotus petals dedicated to the sun, the other to the moon (e.g. light and dark, or male and female) merged at the centre. 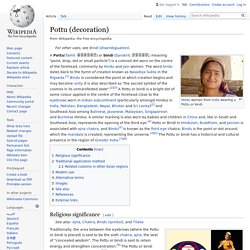 Pottu or Bindi and traditional head ornament with sun and moon pendants. Relief from Stupa, 2nd century B.C. As decoration only female figures were marked with sacred lotus during this period. Beyond Wanderlust: 30 Words Every Traveler Should Know. For those who travel, wanderlust is a familiar feeling. 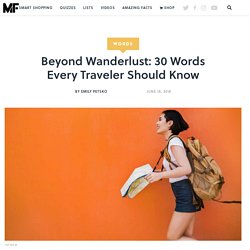 It’s that nagging voice in your head that says, “Yes, you do need to book that flight,” even if your bank account says otherwise. How to Talk to Kids, According to Mr. Rogers. Twenty-five years ago, director Steven Spielberg created a movie that was 65 million years in the making. 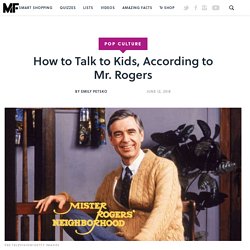 With cutting-edge CG effects and a rousing adventure story only the filmmaker behind Jaws and Raiders of the Lost Ark could conjure, Jurassic Park, based on the novel by author Michael Crichton, went on to become the highest-grossing film of all time at the time (today, it maintains the 17th position). Words for emotions people feel... but can’t quite explain. Have you been to Times Square, or another place that’s usually extremely busy, and it’s just… quiet? The place is usually bustling with people, but now, at this moment while you stand there, it’s eerily quiet. That emotion – that feeling – has a name: kenopsia. Here’s a collection of other strange and obscure emotions and their names: 21 Phrases You Use Without Realizing You're Quoting Shakespeare.

William Shakespeare devised new words and countless plot tropes that still appear in everyday life. Famous quotes from his plays are easily recognizable; phrases like "To be or not to be," "wherefore art thou, Romeo," and "et tu, Brute? " instantly evoke images of wooden stages and Elizabethan costumes. But an incredible number of lines from his plays have become so ingrained into modern vernacular that we no longer recognize them as lines from plays at all. Can you pick up the ‘core’ of ten languages in a year? I previously wrote about how Scientific English is a specialized form of language used in formal presentations and publications.

It is rich in ‘rare’, or extremely low frequency words, and the colocations that define them (i.e. we ‘sequence a genome’ or ‘stretch of ‘DNA’). Learning to comprehend the meaning of such formal language requires considerable exposure and writing it well truly exercises one’s knowledge of the ‘long tail’ of vocabulary. By contrast, ‘the’ is the most common word in English and we use ‘a’ and ‘or’ in the above examples all the time. High and low frequency words can easily be identified by getting computers to do the heavy lifting counting and frequencies vary considerably.

Here are 7 German words that perfectly capture the horror of living in Trump's America. 25 Smart Synonyms You Should Be Using. The word thesaurus literally means "repository" or "storehouse," and it ultimately comes from the same root as the word treasure. Businessinsider. 88 very British phrases that will confuse anybody who didn't grow up in the UK.

Theconversation. Since the early 1990s, the North Koreans have been gaining increasing attention for their use of sharp language. Latin Words and Phrases Every Man Should Know. Diaeresis (diacritic) 11 Facts Yü Should Know About the Umlaut. On the Natural Selection of Words. Blockchain. Definition of Myrmidon by Merriam-Webster. Theconversation. Brits can get rather sniffy about the English language – after all, they originated it. Resistance to changes in grammar is futile, say researchers. When it comes to changes in language, there’s no point crying over spilt milk: researchers charting fluctuations in English grammar say the rise of certain words, such as spilled, is probably down to chance, and that resistance is futile. Comparisons have long been drawn between evolution and changes in language, with experts noting that preferences such as a desire for emphasis can act as a type of “natural selection”, affecting which words or forms of grammar are passed on between generations.

But a new study shows that another evolutionary mechanism might play a key role : random chance. The authors of the study say that the work adds to our understanding of how language changes over centuries. “Whether it is by random chance or selection, one of the things that is true about English – and indeed other languages – is that the language changes,” said Joshua Plotkin, co-author of the research from the University of Pennsylvania.

25 Words You Didn't Know Were in the Dictionary. Definition of tristesse in English by Oxford Dictionaries. Noun. Could language analysis tools detect lone wolf terrorists before they act? – Research Digest. 10 Commonly Misused Words - Everything After Z by Dictionary.com. A short history of ‘dotard,’ the arcane insult Kim Jong Un used in his threat against Trump. Why is linguistics such a magnet for dilettantes and crackpots? Definition of Sartorial by Merriam-Webster. Conflation. The Dirtiest Words...That Aren’t - Everything After Z by Dictionary.com. A few bogus etymologies: ‘’tantrum,” “dander,” “dandruff,” and “dunderhead,” along with “getting one’s goat” How to Begin and End Paragraphs.

The Opening Lines of Romeo and Juliet Recited in the Original Accent of Shakespeare’s Time. Swear Words You’re Neglecting by Dictionary.com. Strange Words Only Millennials Could Think Up by Dictionary.com. Theconversation. How to describe extremists who rallied in Charlottesville. Boasting and bragging. When “Interesting” Isn’t Interesting. Welcome to the Era of the Mega-Lie. 17 Unusual Words That Will Make You Appear Smarter When Describing People. Google’s breakdown of what Americans don’t know how to spell, state by state. How Language Evolved in the Brain. From 'Humbled' to 'Pal': The Rise of the 'Smarmonym' If You Have To Say It, Say It In GIFs. The Appeal Of Emoji: They Don't Say Anything  The Kids Are ALL-CAPS. The Period, Our Simplest Punctuation Mark, Has Become a Sign of Anger.

That’s what zhe said: As genders blur, language is rapidly adapting. Words of 2015 round-up. Creating The World's Greatest Anagram. Orwell was wrong: doublethink is as clear as languag... WEBSITES\HOBOPAGE\hobosigns. Human language may be shaped by climate and terrain. A Way with Words. 24 words that mean totally different things now than they did pre-Internet.

Did human grammar(s) evolve? What "Orwellian" Really Means: An Animated Lesson About the Use & Abuse of the Term. Dictionary of Newfoundland English Search. Language - The War Behind All Wars : Waking Times. Sperm Whales’ Use Of Language Points To Evidence Of Culture. How Do You Pronounce Moët & Chandon? It's Complicated. Lucire Living: How to pronounce 'Moët' - Carolyn Enting solves the champagne pronunciation riddle - The global fashion magazine. The real secret to learning a language online. Irony - Examples and Definition of Irony. Words People Commonly Misuse - Words That People Say Wrong - The Real Definition of Literally. Fifty psychological and psychiatric terms to avoid: a list of inaccurate, misleading, misused, ambiguous, and logically confused words and phrases. MIT claims to have found a “language universal” that ties all languages together.