Darren McGarvey: ‘Class is a fundamental truth we can't ignore’ This photo of children living in poverty caused shock waves in 1992. Where are they now? When Katrina first saw the photo, she cried. 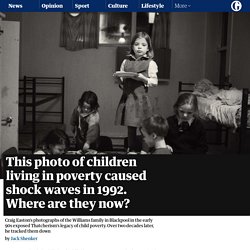 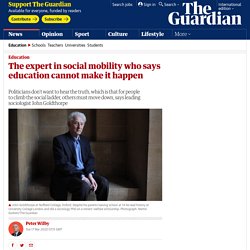 “We can unleash the biggest wave of social mobility since the second world war,” said prime minister Gordon Brown in 2010. “I want to see a more socially mobile Britain,” said David Cameron in 2013. “I want Britain to be the world’s great meritocracy,” said Theresa May in 2016. The politicians’ message has been consistent. But so too has been the message from Britain’s leading sociologist, John Goldthorpe, emeritus professor at Oxford University. How Eton’s cosseted world shaped Boris Johnson. Social class still stops too many pupils from fulfilling their A-level potent... As A-level students across England, Wales and Northern Ireland open their results today it is fascinating to see how the public broadcasting of success is reaching ever wider audiences through news streaming and social media, where constant posting and comments will dominate news for the next few days. 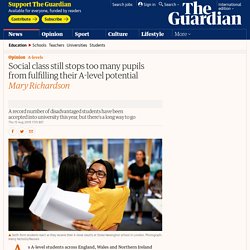 Images of young people literally jumping for joy dominate the headlines and the exam results data is closely interrogated. Data analysis usually rests on pass rates and concern about whether these have risen or fallen; each year there are questions that challenge our trust in the so-called gold standard examination, because A-levels have the potential to open doors for (some) young people. More than 4m in UK are trapped in deep poverty, study finds. More than 4 million people in the UK are trapped in deep poverty, meaning their income is at least 50% below the official breadline, locking them into a weekly struggle to afford the most basic living essentials, an independent study has shown. 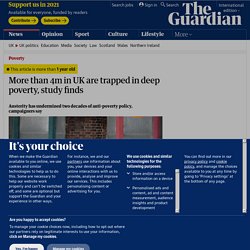 The Social Metrics Commission also said 7 million people, including 2.3 million children, were affected by what it termed persistent poverty, meaning that they were not only in poverty but had been for at least two of the previous three years. Highlighting evidence of rising levels of hardship in recent years among children, larger families, lone parent households and pensioners, the commission urged the new prime minister, Boris Johnson, to take urgent action to tackle growing poverty.

Britain’s top jobs still in hands of private school elite, study finds. Members of Britain’s elite, who hold the top jobs in politics, the judiciary, media and business, are five times more likely to have been to private school than the general population, according to research. 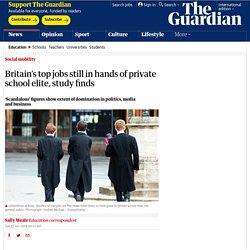 A study by the Sutton Trust and the Social Mobility Commission found that a tiny elite of privately educated people, many of whom went to Oxbridge, continue to dominate high-ranking jobs, where 39% had an independent education, compared with 7% of the general population. Critics described the figures as “scandalous” and called for urgent change. Researchers examined the educational backgrounds of more than 5,000 leading figures across nine broad categories including politicians, tech bosses, stars from the worlds of film, pop and sport, journalists, judges and FTSE 350 chief executives. Elsewhere, 65% of senior judges, 57% of members of the House of Lords, 59% of civil service permanent secretaries and 52% of Foreign Office diplomats come from a private school background.

Capitalism is destroying the Earth. We need a new human right for future gene... The young people taking to the streetsfor the climate strike are right: their future is being stolen. 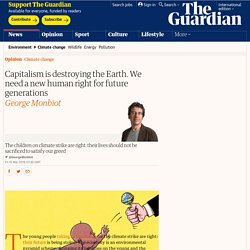 The economy is an environmental pyramid scheme, dumping its liabilities on the young and the unborn. Its current growth depends on intergenerational theft. At the heart of capitalism is a vast and scarcely examined assumption: you are entitled to as great a share of the world’s resources as your money can buy. You can purchase as much land, as much atmospheric space, as many minerals, as much meat and fish as you can afford, regardless of who might be deprived.

If you can pay for them, you can own entire mountain ranges and fertile plains. But why? This argument was developed by the jurist William Blackstone in the 18th century, whose books were immensely influential in England, America and elsewhere. Meritocracy is a myth invented by the rich. The US college admissions scandal is fascinating, if not surprising. 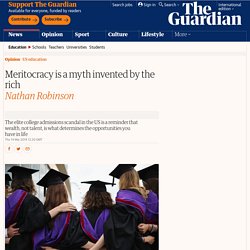 Over 30 wealthy parents have been criminally charged over a scheme in which they allegedly paid a company large sums of money to get their children into top universities. The duplicity involved was extreme: everything from paying off university officials to inventing learning disabilities to facilitate cheating on standardized tests. Felicity Huffman among dozens charged over admissions fraud at top US schools. US federal prosecutors have charged dozens of people in a years-old $25m scheme to help wealthy Americans buy their children’s way into elite universities including Yale, Georgetown and Stanford, and the University of Southern California. 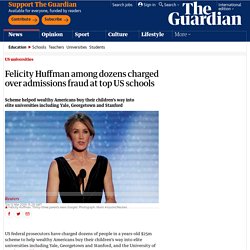 Federal prosecutors in Boston charged William “Rick” Singer, 58, with running the racketeering scheme through his Edge College & Career Network, which served a roster of clients including chief executives and Hollywood actors. Fightback against the billionaires: the radicals taking on the global elite. Teaching all pupils to act more like Etonians won’t help solve inequality. It really does take a special kind of inattention to observe public life today and conclude that what we need is more public school swagger. 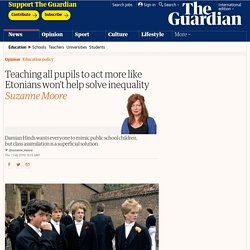 Our politics is currently dominated by men who are so convinced of their own swag it’s dangerous. We know where politics as a debating society with no real-world consequences leads: Jacob Rees-Mogg and Boris Johnson are exemplary only in their callous recklessness. Still, here we have the education secretary, Damian Hinds (I know no one knows who he is or what he does, as Brexit has vacuumed all policy into its void), suggesting that state school pupils should practise debating and public speaking to compete against Old Etonians in the workplace.

“Public school confidence” is something he wants to “call time” on, so that all kinds of everyone can hold their own. Wow. Public school confidence is not some hard-won quality, it is a purchase. Teaching all pupils to act more like Etonians won’t help solve inequality. The class pay gap: why it pays to be privileged. Uber drivers ‘£18,000 poorer’ as firm appeals two-year-old tribunal order. Uber drivers are estimated to be more than £18,000 out of pocket because the ride hailing company refuses to recognise a two-year-old ruling entitling them to holiday pay, a minimum wage and rest breaks. 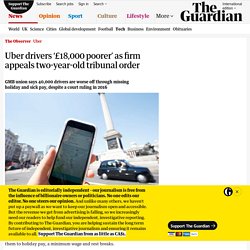 The law firm Leigh Day – acting for the GMB union, which brought the action against the tech giant – calculates that its 40,000 drivers are all owed almost £11,000 in wages and more than £8,000 in holiday pay. But Uber is continuing to appeal the ruling, made two years ago at the central London employment tribunal. The myth of meritocracy: who really gets what they deserve? Michael Young was an inconvenient child. The miller’s tale: poverty, obesity and the 45p loaf. Cinnamon Square craft bakery, in a historic building in Rickmansworth, near Watford, has been full of children on their half-term break learning the ancient art of proving and kneading dough.

Its owner, Paul Barker, likes to set a test to help them see how different “real” bread is from the white, sliced factory loaf most of them are used to. Take a piece of white sliced and rub it in your hands; it quickly turns in to a grey, tacky ball that looks as unappetising as old chewing gum. Boris Johnson’s white privilege: imagine he was a black woman. To the outside world, Boris Johnson has become a faithful representation of Britain’s current foreign policy.

Hunger in Wirral: the truth behind the tale that made a Tory MP cry. It was the true story that moved a Tory to tears: Heidi Allen, Conservative MP for South Cambridgeshire, wept after Frank Field, the veteran Labour MP for Birkenhead in Wirral, told parliament of the hungry constituent who said he had had “a lucky week” because his family had been invited to a funeral and so could eat the food left over after the wake. ‘There’s no life here’: a journey into Britain’s precarious future. At the Ebbw Vale steelworks in the south Wales valleys, thousands of men once laboured to produce the steel that helped to drive Britain’s industrial revolution. Social mobility in Great Britain: fifth state of the nation report. I benefited from social mobility – and I still feel like a permanent outsider. Social mobility is a stark postcode lottery. Too many in Britain are being left behind. Britain is a deeply divided nation. Disadvantaged children face worse outcomes in some rich areas – report.

Children from deprived backgrounds face the worst prospects in some of the richest parts of the country, according to a damning new study that lays bare deep geographical divisions across Britain. An annual report by the government’s own social mobility watchdog warns that while London and its suburbs are pulling away, rural, coastal and former industrial areas are being left behind. 'Happily gentrifying since 2014': Denver coffee shop sign sparks fury. Richest 1% own half the world's wealth, study finds. The globe’s richest 1% own half the world’s wealth, according to a new report highlighting the growing gap between the super-rich and everyone else. The world’s richest people have seen their share of the globe’s total wealth increase from 42.5% at the height of the 2008 financial crisis to 50.1% in 2017, or $140tn (£106tn), according to Credit Suisse’s global wealth report published on Tuesday. “The share of the top 1% has been on an upward path ever since [the crisis], passing the 2000 level in 2013 and achieving new peaks every year thereafter,” the annual report said.

The bank said “global wealth inequality has certainly been high and rising in the post-crisis period”. The increase in wealth among the already very rich led to the creation of 2.3 million new dollar millionaires over the past year, taking the total to 36 million. “The number of millionaires, which fell in 2008, recovered fast after the financial crisis, and is now nearly three times the 2000 figure,” Credit Suisse said.