How gender, age, class, ethnicity and membership of social groups can affect our use of language.

BBC Radio 4 - Word of Mouth, Social Register. John Holm, 72, Dies; Opened Linguistics to Creole and Pidgin Tongues. TEDxEastEnd - Paul Kerswill - Who's an Eastender now? Why are so many middle class children speaking in Jamaican patois? A father of an 11-year-old girl laments a baffling trend. By Nick Harding Published: 00:19 GMT, 11 October 2013 | Updated: 11:11 GMT, 11 October 2013 With her ear glued to her mobile phone, my 11-year-old daughter, Millie, was deep in conversation, her brow furrowed as she discussed some arrangement with a friend. 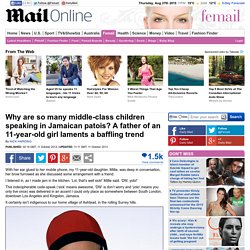 I listened in, as I made jam in the kitchen. ‘Lol, that’s well sick!’ Millie said. This indecipherable code-speak (‘sick’ means awesome, ‘DW’ is don’t worry and ‘yolo’ means you only live once) was delivered in an accent I could only place as somewhere between South London, downtown Los Angeles and Kingston, Jamaica. It certainly isn’t indigenous to our home village of Ashtead, in the rolling Surrey hills. It's not a'ight: Many youngsters are now adopting a bizarre hybrid of accents incorporating Jamaican patois, American west coast and London When Millie ended the call, she turned to me, smiled and asked: ‘What’s for supper please, Dad?’ 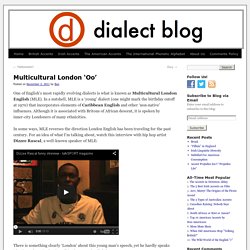 In a nutshell, MLE is a ‘young’ dialect (one might mark the birthday cutoff at 1970) that incorporates elements of Caribbean English and other ‘non-native’ influences. Although it is associated with Britons of African descent, it is spoken by inner-city Londoners of many ethnicities. In some ways, MLE reverses the direction London English has been traveling for the past century. Language variation flashcards.

Linguistics Research Digest: Multicultural London English. From the mouths of teens - This Britain - UK - The Independent. "Check the creps," says the other. 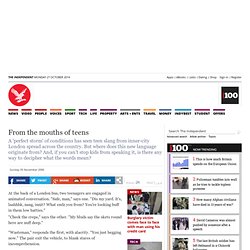 "My bluds say the skets round here are nuff deep. " "Wasteman," responds the first, with alacrity. "You just begging now. " The pair exit the vehicle, to blank stares of incomprehension. Later, this dialogue is related to Gus, a 13-year-old who attends an inner London comprehensive; he wastes no time in decoding it. ''Safe just means hi,'' he says briskly. CREOLE ENGLISH AND BLACK ENGLISH. By Mark Sebba Department of Linguistics and English Language Lancaster University Lancaster LA1 4YT, England e-mail: M.Sebba@lancaster.ac.uk © 2002 Mark Sebba "Black English" can refer to two different language varieties: (1) the type of English used by people of African and Caribbean descent who live in Britain; (2) the language of African-Americans (negroes) in the United States. 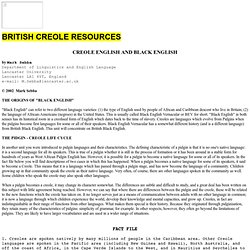 In another unit you were introduced to pidgin languages and their characteristics. When a pidgin becomes a creole, it may change its character somewhat. 1. 2. 3. Sonny`s lettah Linton Kwesi Jhonson. East End Cockney accent 'fading' A new form of accent is replacing the traditional Cockney in some parts of the East End, research has found. 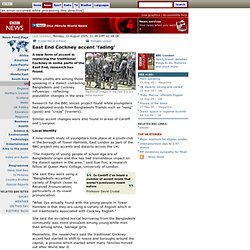 White youths are among those speaking in a dialect combining Bangladeshi and Cockney influences - reflecting population changes in the area. Research for the BBC Voices project found white youngsters had adopted words from Bangladeshi friends such as "nang" (good) and "creps" (trainers). Similar accent changes were also found in areas of Cardiff and Liverpool. Local identity A nine-month study of youngsters took place at a youth club in the borough of Tower Hamlets, East London as part of the BBC project into accents and dialects across the UK.

"The majority of young people of school age are of Bangladeshi origin and this has had tremendous impact on the dialect spoken in the area," said Sue Fox, a research fellow at Queen Mary College, University of London. Jamila Lyiscott: 3 ways to speak English. Pidgin, patois, slang, dialect, creole — English has more forms than you might expect. There are probably as many terms for different kinds of English vernacular as there are vernaculars themselves: pidgin, patois, slang, creole dialect and so on. 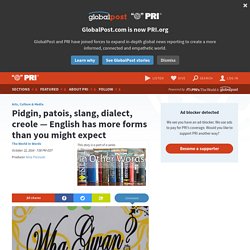 But while we usually think of the vernaculars as oral versions of the English language, they're making their way into the written word as well. “There's a really interesting paradox going on, where you're taking something that's constantly changing — and that people don't expect to see written down — and you're making it codified and setting it down for a wider audience," says Dohra Ahmad, editor of an anthology of vernacular literature called "Rotten English. " M. NourbeSe Philip, one of the authors included in the anthology, speaks and writes Trinidadian Creole but points out that the process of getting the language on the page is much the same as writing in Standard English.

“You can’t write it exactly as the person speaks it," she says. “When I grew up [the vernacular] was called ‘bad English,’" she remembers. Cards: Variation by ethnicity.