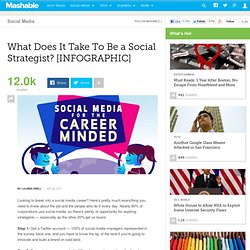 Here's pretty much everything you need to know about the job and the people who do it every day. Nearly 80% of corporations use social media, so there's plenty of opportunity for aspiring strategists — especially as the other 20% get on board. Step 1: Get a Twitter account — 100% of social media managers represented in the survey have one, and you have to know the lay of the land if you're going to innovate and build a brand on said land.

Step 2: Be ready to wear many hats. What Does a Social Media Community Manager Do? Take a Glimpse. One of the essential hires for companies that want to affect real change as a social media savvy organization connecting with people and communities is a Community Manager. 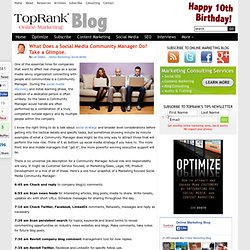 During the social media discovery and initial learning phase, the addition of a dedicated person is often unlikely. So the tasks a Community Manager would handle are often performed by a combination of a truly competent outside agency and by multiple people within the company. I know the right thing to do is talk about social strategy and broader level considerations before getting into the tactical details and specific tasks, but sometimes showing minute by minute examples of what a Community Manager does might be the only way to attract those that will perform the new role. Think of it as bottom up social media strategy if you have to. The more front line and middle managers that “get it”, the more powerful winning executive support will be. Hourly Rate for Setting Up Social Media Profiles?! I am always ready for a brainstorm. 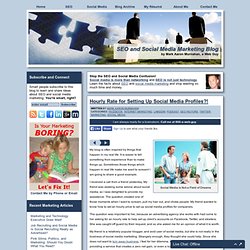 Call me at 866-a-web-guy. How Much Do Top Tier Bloggers and Social Media Consultants Get Paid? We Asked Them! The media world is changing and its jobs are changing too. 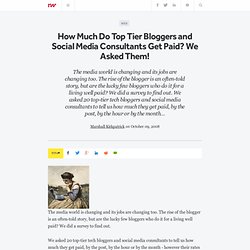 The rise of the blogger is an often-told story, but are the lucky few bloggers who do it for a living well paid? We did a survey to find out. We asked 20 top-tier tech bloggers and social media consultants to tell us how much they get paid, by the post, by the hour or by the month - however their rates are set. Half of them told us, on the condition that we wouldn't disclose who they were or where they worked. The end result is an anecdotal overview of what some of the top tech bloggers and social media consultants are making. There are a handful of people in tech blogging that make even more than this but the vast majority of people who get paid to blog get paid far less.

Our methodology was to email people we trust to be honest and who trust us to keep their identities secret, and ask them to post anonymously their rates and the rates they can confirm of co-workers or employees they've overseen within the last year. The Social Media Salary Guide [INFOGRAPHIC] Social Media Week is upon us, so we thought it would be appropriate to delve into the social media industry and see how its salaries stack up. 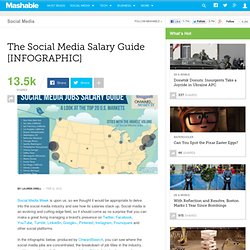 Social media is an evolving and cutting-edge field, so it should come as no surprise that you can make a great living managing a brand's presence on Twitter, Facebook, YouTube, Tumblr, LinkedIn, Google+, Pinterest, Instagram, Foursquare and other social platforms. In the infographic below, produced by OnwardSearch, you can see where the social media jobs are concentrated, the breakdown of job titles in the industry, and how much dough the average social mediate is bringing home each year.

(The graphic shows the 25th and 75th percentiles for salary, pulled from Indeed). Does this stack up with what you've seen in the industry? Do you think these positions and the salaries make sense, given the rise of social media? Infographic courtesy of OnwardSearch. Documents.ashx (application/pdf Object) Why Do Businesses Need Social Media Managers? Its now an undisputed fact. 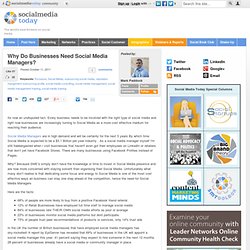 Every business needs to be involved with the right type of social media and right now businesses are increasingly turning to Social Media as a more cost effective medium for reaching their audience. Social Media Managers are in high demand and will be certainly for the next 5 years By which time Social Media is expected to be a $3.1 Billion per year industry . As a social media manager myself I'm still flabbergasted when i visit businesses that haven't even got their employees on LinkedIn or retailers that don’t yet have Facebook Stores. There are many businesses using Facebook Profiles instead of Pages. Why? Here are the facts: In the UK the number of British businesses that have employed social media managers has sky-rocketed!

Bottom line. . . businesses want, need and are actively looking for social media managers. According to Payscale.com the UK Median Salary for a Social Media Manager is £47,829 running up to £78,297. Connect: Authored by: Mark Paddock. What does a social media manager do all day? By Christine Smith | Posted: April 2, 2012 Do you have dreams about posting to Facebook and nightmares about Twitter followers abandoning your brand’s page? 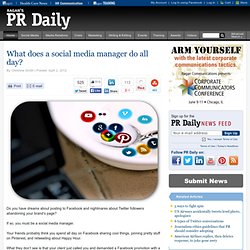 If so, you must be a social media manager. Your friends probably think you spend all day on Facebook sharing cool things, pinning pretty stuff on Pinterest, and retweeting about Happy Hour. What they don’t see is that your client just called you and demanded a Facebook promotion with a minimum of 100 entries, so you just shared it on your Facebook page and all of your friend’s pages. The boutique that hired you just asked you to put up their entire spring line on Pinterest, and those 30 restaurants you work with all have Happy Hour specials today, and they want their Twitter followers there. Here’s how to tell everyone what you really do: First, you check and respond to the 367 emails that attempt to crash your computer every morning while drinking the first cup of coffee for the day. What Does A Social Media Manager Do? Despite messaging, of the various emails we get, a frequent question is what exactly does a social media manager do? Some like to be vague or mysterious about what they do.

Who knows why this is, but let’s shed some light on the topic. 1) Account creation. Some people are masters of sites like Facebook and Twitter, while others are still learning it, and still others are at step 1, but know they want to use it. We help establish and customize accounts for users of all levels. 2) Content. 3) Follower collection. 4) SEO. There’s more and the above descriptions are short and general, but the four areas cover the social media services we provide to most of our clients.