How To Become An ITK (In The Know) On Social Media. As you may have guessed from previous posts, I have a slight liking for Social Media and how it’s used to outreach to audiences you would otherwise never get the chance to speak to. 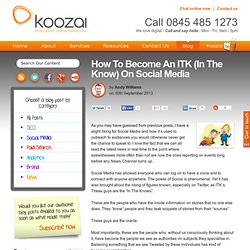 I love the fact that we can all read the latest news in real-time to the point where eyewitnesses more often than not are now the ones reporting on events long before any News Channel turns up. Social Media has allowed everyone who can log on to have a voice and to connect with anyone anywhere. The power of Social is phenomenal. Yet it has also brought about the rising of figures known, especially on Twitter, as ITK’s. #AskHarry Is the Latest Football Twitter Chat Fail. What’s my favourite social platform? 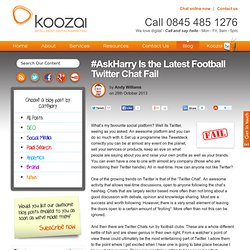 Well its Twitter, seeing as you asked. An awesome platform and you can do so much with it. Set up a programme like Tweetdeck correctly you can be at almost any event on the planet, sell your services or products, keep an eye on what people are saying about you and raise your own profile as well as your brands. You can even have a one to one with almost any company (those who are monitoring their Twitter handle). All in real-time. One of the growing trends on Twitter is that of the “Twitter Chat”. And then there are Twitter Chats run by football clubs. How To Gain More Followers On Social Media. Hi guys. 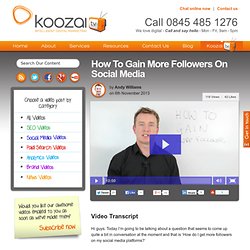 Today I’m going to be talking about a question that seems to come up quite a bit in conversation at the moment and that is ‘How do I get more followers on my social media platforms?’ First off, social media … I think we’ve got to the stage now where if you’re a online business, you need to have a presence socially. I know a lot of businesses still feel nervous about getting into this kind of field, they don’t want people to be able to leave comments about them on Facebook or tweet about them on Twitter or anything like that. I think we’ve got to the stage now where so much information is taken by the likes of Google regarding social media activity, be it conversations, retweets, people engaging [and] sharing content from online businesses, that it’s unavoidable.

The Ultimate List Of Local SEO Resources. In 2011 I put together a list of 21 Local SEO resources to help those out who were looking to gain a better presence locally in Google. 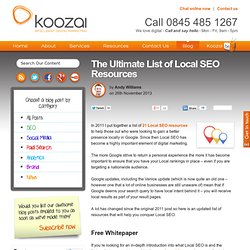 Since then Local SEO has become a highly important element of digital marketing. The Case of Katie Hopkins and Other Deliberate Hate Figures. Before the 4th July 2013 most people (who could remember) knew Katie Hopkins as a former candidate on the BBC show The Apprentice in 2006. Of those of us who watched the show we remember her as the one we all enjoyed hating. She was the show’s villain for that series. Her outrageous claims on her CV that she would do anything to get what she wanted – including her husband whom she stole from his ex-wife, did little to warm the hearts of Sir Alan Sugar or the TV audience. By 6:00pm on the 4th July 2013 and one controversial TV appearance later, almost everyone in the UK knew who Katie Hopkins was.

Within a few days she was actually pretty well known in most countries. Why? Complete with examples of what she felt certain names meant and indicating an element of snobbery, this rubbed everyone in the country up the wrong way. Twitter went mad with everyone jumping online to have their say. The result – everyone now knows who Katie Hopkins is.

Real-Time Lives. Local SEO - A Complete Guide for 2013. A majority of site owners are fully aware that they need to optimise their site to stand a chance of competing in the search engine rankings. 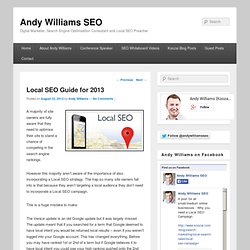 However this majority aren’t aware of the importance of also incorporating a Local SEO strategy. The trap so many site owners fall into is that because they aren’t targeting a local audience they don’t need to incorporate a Local SEO campaign. This is a huge mistake to make. The Venice update is an old Google update but it was largely missed.

Is It Better To Be A Generalist or A Specialist in Digital Marketing? When I first started out, I was an SEO. 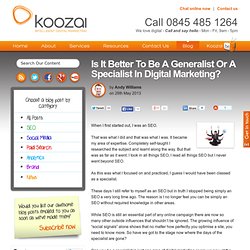 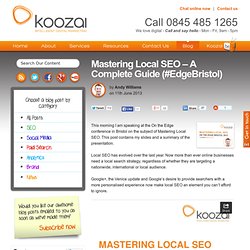 This post contains my slides and a summary of the presentation. Local SEO has evolved over the last year. Now more than ever online businesses need a local search strategy, regardless of whether they are targeting a nationwide, international or local audience. The Complete Guide to Local SEO. Hi. 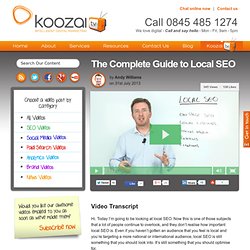 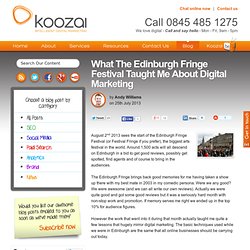 Around 1,500 acts will all descend on Edinburgh in a bid to get good reviews, possibly get spotted, find agents and of course to bring in the audiences. The Edinburgh Fringe brings back good memories for me having taken a show up there with my best mate in 2003 in my comedic persona. Were we any good? We were awesome (and we can all write our own reviews). Actually we were quite good and got some good reviews but it was a seriously hard month with non-stop work and promotion. However the work that went into it during that month actually taught me quite a few lessons that hugely mirror digital marketing. No they won’t. You could have the greatest comedy show in Edinburgh during that month but if no one knows about it or is told about it, they won’t come. You are up against 1,499 other shows.

It’s no different for your online business. Live with it.