Guaranteed Number One Rankings in 48 Hours and Other Lies. Picture the scene; Spring is here, the sun is finally out, the evenings are light again and birds are singing. 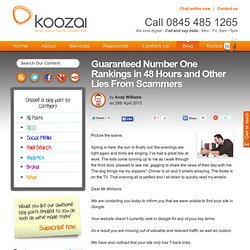 I’ve had a great day at work. The kids come running up to me as I walk through the front door, pleased to see me, gagging to share the news of their day with me. The dog brings me my slippers*. Dinner is on and it smells amazing. Dear Mr Williams We are contacting you today to inform you that we were unable to find your site in Google. Your website doesn’t currently rank in Google for any of your key terms. As a result you are missing out of valuable and relevant traffic as well as custom. We have also noticed that your site only has 7 back links. We can guarantee you top rankings for your key terms… Etc. And breathe. The Forgotten Art of Creating Good Title Tags. The humble Title tag. 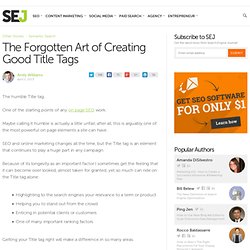 One of the starting points of any on page SEO work. Maybe calling it humble is actually a little unfair, after all, this is arguably one of the most powerful on page elements a site can have. SEO and online marketing changes all the time, but the Title tag is an element that continues to play a huge part in any campaign. Because of its longevity as an important factor I sometimes get the feeling that it can become over looked, almost taken for granted, yet so much can ride on the Title tag alone: Highlighting to the search engines your relevance to a term or productHelping you to stand out from the crowdEnticing in potential clients or customersOne of many important ranking factors.

Stumbleupon Channels - The Main Changes in Stumbleupon's Redesign. You may have noticed that Stumbleupon has recently undergone a rather big redesign. 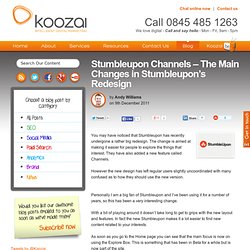 The change is aimed at making it easier for people to explore the things that interest. They have also added a new feature called Channels. However the new design has left regular users slightly uncoordinated with many confused as to how they should use the new version. Five Bad SEO Habits to Drop In 2012. As we come to the end of 2011, I have had a think back over the last year to review those SEO bad habits that have been encountered in the previous 12 months. 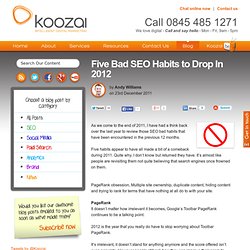 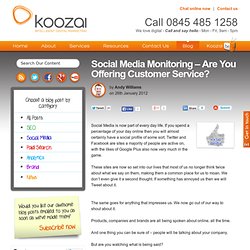 If you spend a percentage of your day online then you will almost certainly have a social profile of some sort. Twitter and Facebook are sites a majority of people are active on, with the likes of Google Plus also now very much in the game. Are Old SEO Tactics Holding Your Site Back? As the saying goes: “A little bit of knowledge is a dangerous thing”. 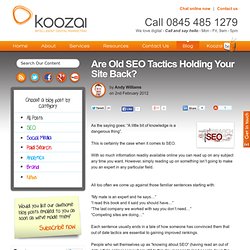 This is certainly the case when it comes to SEO. Are You Really Using Twitter? Twitter has become part of everyday life with over 360 million accounts signed up and live. 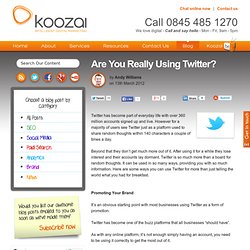 However for a majority of users see Twitter just as a platform used to share random thoughts within 140 characters a couple of times a day. Beyond that they don’t get much more out of it. After using it for a while they lose interest and their accounts lay dormant. Twitter is so much more than a board for random thoughts. It can be used in so many ways, providing you with so much information. Google's Venice Update and Local SEO. Google’s Venice update in February brought about 40 algorithm changes – a number of which have sparked a few debates. 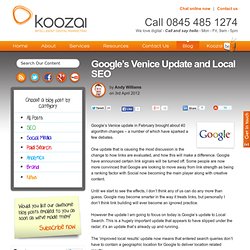 One update that is causing the most discussion is the change to how links are evaluated, and how this will make a difference. Google have announced certain link signals will be turned off. Ecommerce SEO and Beyond - The Complete Guide. Shopping online has become part of everyday life. The simplicity of being able to log onto the internet and buy what you need instead of making a round trip to the shops means that more and more shops are going online. If you sell products online then getting the SEO right on your Ecommerce site has never been so important. With so many online shops live it is now just as competitive online as it is in the high street – perhaps even more so. Ecommerce sites by their nature don’t usually include a lot of content, which means that site owners need to ensure that they address other elements to give their sites a competitive edge. In this post I have put together a comprehensive guide to Ecommerce SEO as well as the other factors that should also be looked into to give you a competitive edge.

Keyword Research. Google + Local Pages Replace Google Places. If there were still people out there unconvinced as to how big a part Google + was going to play in the big Google shake up then the latest in a string of big updates (from Google) should finally give the biggest indication yet. 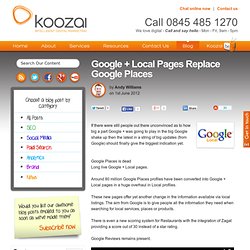 Google Places is dead Long live Google + Local pages. Around 80 million Google Places profiles have been converted into Google + Local pages in a huge overhaul in Local profiles. These new pages offer yet another change in the information available via local listings. The aim from Google is to give people all the information they need when searching for local services, places or products. Why That Mystery Mate Can't Do SEO. There is a mythical being in the Digital Marketing world. Most of us have encountered him, some may have even heard his voice during a brief one-off phone call but none of us have ever seen or met him. He sits in the background watching and waiting. Waiting until your client’s SEO campaign is doing well and then he pounces. We all know there is a chance he is there but you never know for sure until you hear the infamous line: “My mate, who does a bit of SEO said…” It’s the dreaded “mate”.

He’s the flea in your client’s ear, the guy who once read a blog post from 2003 and now knows everything there is to know about SEO. The truth is he doesn’t know anything about SEO, I doubt he even knows what SEO is but that doesn’t stop him from being a very dangerous person to you and your client’s campaign. He will talk to your client with such conviction and authority on the subject that if you were also in the room at the same time you may well yourself believe every word spoken.

Just Who Is Using Google+? In June 2011 Google launched Google+, another attempt from Google at taking on the social market. After Google Wave, Google+ was seen as the platform that was finally ready to take on the big player Facebook. Just over one year on and Google+ boasts over 250 million registered users. Not bad for its first year however of those 250 million users who have registered an account only 150 million are active users.

Business Owners - Stop Being Scared of Social Media. We have all read it and we have all heard it coming from all angles especially since Penguins and Pandas caused havoc with so many online businesses: It’s all about social signals. What’s in a Name? - Should You Brand Your Child? On the 25th September 2012 the legendary American singer Andy Williams passed away. Sad news indeed – well it was for me. This had been a day I had been dreading for a while. Why Do Site Owners Continue To Ignore Google? It’s the end of November and this is usually the time when we all start to see those “Review of the Year” type posts or “My Favourite Google Update in 2012”.

So I naturally thought I would think about my review of 2012 to see if there was anything I could add to the mix.