With New Software, Apple Looks to Bring Together Local Search and Commerce. Apple showed off updates to its three operating systems Monday, announcing the next iterations to both OSX and iOS as well as a new version of the operating system for Apple Watch. 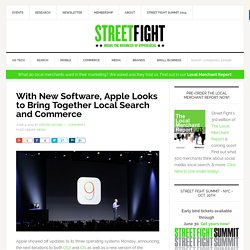 The updates include vast changes to core functionality as well as large updates to a handful of Apple-developed applications such as Maps, Apple Pay and Passbook. Craig Federighi, senior vice president of software engineering at Apple, said iOS 9, the newest version of its mobile software, will be released this fall. The move comes as Apple looks to extends its lead beyond Google’s Android operating system, introduce a new device in Watch and create software to enter a host of new markets from payments to local search. The announcements Monday also mark an important moment in the development of initiatives such as Apple Pay and Maps that many believe will play an important role in shaping the local industry.

Apple Pay and Square Passbook rebranded as wallet. The End of Yahoo Maps and the Missing Local Strategy. Shortly after Marissa Mayer took over as CEO of Yahoo she made a pledge to revitalize many of Yahoo’s long-suffering consumer properties, such as Yahoo Mail and Finance. 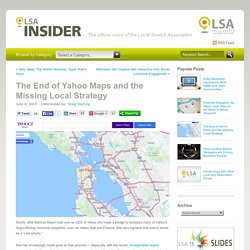 She also signaled that search would be a “core priority.” She has increasingly made good on that promise — especially with the recent, re-negotiated search agreement with Microsoft that gives Yahoo more control and flexibility. But somewhere in that mix is local content and local search, which have not received the attention of other inititiatives.

Indeed, if anything, Yahoo has distanced itself from local. Mayer explained that despite the renewed Yahoo focus on the consumer experience in general and search in particular, the company wasn’t going to invest in local search. I really do love [local], but it requires a deep investment, a lot of energy and time to build terrific listings. Given Mayer’s background, especially right before she left Google, I was very surprised by this. Verizon Now Owns an Ad Tech Company — Here’s What It Means for Local. Verizon surprised the ad tech community earlier this week announcing its $4.2 billion acquisition of AOL. 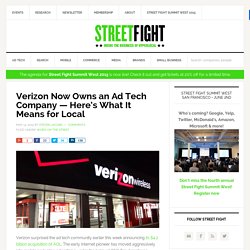 The early Internet pioneer has moved aggressively into mobile and video advertising under the helm of CEO Tim Armstrong, amassing an impressive technology portfolio in addition to large media assets that include TechCrunch and the The Huffington Post. The future of the media assets remain unclear, but AOL’s ad tech assets position Verizon to make an aggressive push into mobile and video advertising. The carrier has experimented with advertising products before through its Precision Market Insights division, but the efforts have remained mostly under-the-radar. Carriers have struggled to find ways to monetize the massive amount of data, which flows through their networks for years, but advertising may prove their best bet.

In addition to other data points, Verizon and others have access to one of the largest sets of location data outside of possibly Google. Enhancing AdWords for a constantly connected world. Today we’re upgrading AdWords, by rolling out enhanced campaigns. 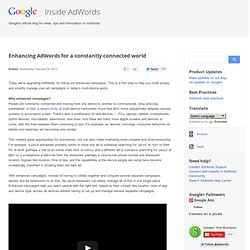 This is a first step to help you more simply and smartly manage your ad campaigns in today’s multi-device world. Why enhanced campaigns? People are constantly connected and moving from one device to another to communicate, shop and stay entertained. In fact, a recent study of multi-device consumers found that 90% move sequentially between several screens to accomplish a task. There’s also a proliferation of new devices — PCs, laptops, tablets, smartphones, hybrid devices, mini-tablets, televisions, and more. This creates great opportunities for businesses, but can also make marketing more complex and time-consuming. With enhanced campaigns, instead of having to cobble together and compare several separate campaigns, reports and ad extensions to do this, the pizza restaurant can easily manage all of this in one single place. Key features Here’s an overview of some key features. How To Create Your Local SEO Roadmap Through Research, Benchmarking & Tracking.

During the regular online training sessions which I deliver to our customers, I inevitably get asked the same question. 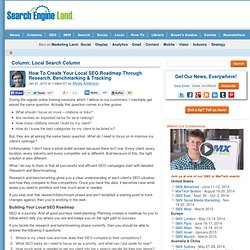 Actually this question comes in a few guises. What should I focus on more – citations or links? Are reviews an important factor for local ranking? How many citations should I build for my client? How do I know the best categories for my client to be listed in? But, they are all asking the same basic question: What do I need to focus on to improve my client’s rankings? Unfortunately, I don’t have a silver-bullet answer because there isn’t one. What I do say to them is that all successful and efficient SEO campaigns start with detailed Research and Benchmarking. Research and benchmarking gives you a clear understanding of each client’s SEO situation and how they compare to their competitors. If you skip over this research/benchmark phase and don’t establish a starting point to track changes against, then you’re working in the dark. Building Your Local SEO Roadmap 1. 2. 3.