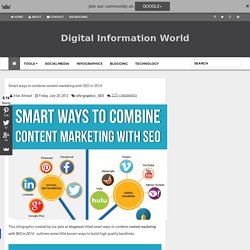 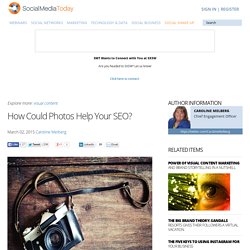 While a photo may not help a search engine, it probably would help a searcher decide if your link was worth the click. Matt Southern of Search Engine Journal took a look at a recent development: Google Gives Business Owners More Control Over Photos Displayed In Search Results. What it means for business owners is options like having one photo for Google+ and a different image for other Google properties, like search. How many different photos you use is up to you, but you can opt for different categories like interior or exterior photos, or shots of your team or workplace. If you want to explore your options, log into your business profile, go to the Photos section, and use the new intuitive feature to see what is possible. People Like Pictures You know that old saying, “a picture is worth a thousand words”? Hey, I know that person! Kimberlee Lockhart sur Twitter : "What SEO Used To Be Versus What SEO Is Now [Infographic] >

Kimberlee Lockhart sur Twitter : "The 8 Most Important #SEO Data Points of Any Website > 17 SEO Myths to Leave Behind in 2015 [Free Ebook] SEO is an evolving science. 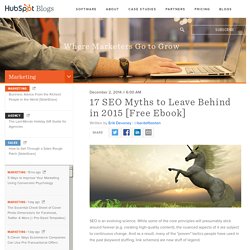 While some of the core principles will presumably stick around forever (e.g. creating high-quality content), the nuanced aspects of it are subject to continuous change. And as a result, many of the "proven" tactics people have used in the past (keyword stuffing, link schemes) are now stuff of legend. Unless your organization benefits from having a dedicated SEO person who can work on this stuff day-in, day-out, keeping up with the latest changes in the world of SEO can be a struggle. But in the end, adjusting your strategy based on search ranking algorithm updates or changes in the way search results are displayed visually can benefit your business. In our new guide, 17 SEO Myths to Leave Behind in 2015, we reiterate some of the best practices that should continue to guide your strategy through 2015, while also highlighting how SEO has changed over the course of 2014.

Welp, it’s all over. Twitter’s Renewed SEO Focus Sees Huge Increase in Search-Related Visitors. Posted by Shelly Kramer on December 18, 2014 · Leave a Comment After a fallout several years ago with The Google, Twitter recently announced the move to allow search engines better access to popular hashtag pages, making Twitter once again in the traffic game. 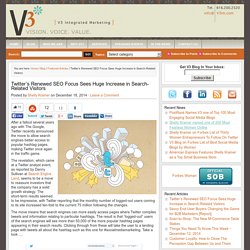 The revelation, which came at a Twitter analyst event, as reported by Danny Sullivan at Search Engine Land, seems to be a move to reassure investors that the company has a solid growth strategy. The short-term results seemed to be impressive, with Twitter reporting that the monthly number of logged-out users coming to its site increased ten-fold to the current 75 million following the changes. The move means that search engines can more easily access pages where Twitter compiles tweets and information relating to particular hashtags. The result is that “logged-out” users of the search engines will see more than 50,000 of the more popular hashtag pages appearing in their search results. 5 SEO Strategies That Will Still Work in 2015. Thanks, Google! 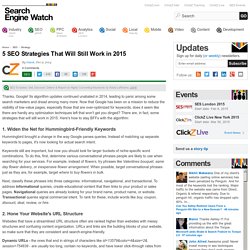 Its algorithm updates continued unabated in 2014, leading to panic among some search marketers and dread among many more. Now that Google has been on a mission to reduce the visibility of low-value pages, especially those that are over-optimized for keywords, does it seem like there are hardly any optimization techniques left that won't get you dinged? There are, in fact, some strategies that will still work in 2015. True Confessions of a Former SEO Whore  Admittedly, my digital marketing career never really took off until I started doing SEO in 2007. 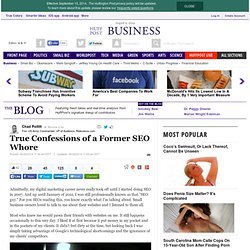 And up until January of 2012, I was still professionally known as that "SEO guy. " For you SEOs reading this, you know exactly what I'm talking about. 22 SEO Resources for Any Skill Level. Social Media Marketing Services. Brought to you by Social Fishing – Social Media Marketing Twitter has become one of the giants of social media platforms alongside Facebook , Pinterest and LinkedIn . It has become the number one place where people go to learn about what other people is up to, learn about recent updates and trends. If you haven’t jumped into the fun of Social Media sharing interesting information on twitter then you missing out on a big opportunity of reaching out to your target audience. Whatever your reason for using Twitter which is one of the most popular Social Media Marketing websites on the web, let us help you set your mind on using twitter to the most that your business can take advantage of.

Purpose. Use Hashtags Without Being #Annoying – 3cseo. Hashtags became instantly popular when they were introduced to us via Twitter, and then soon spread across Pinterest, Google+, Tumblr, Instagram, and the holy grail Facebook, to create the hashtag phenomenon that we experience on a daily basis today. 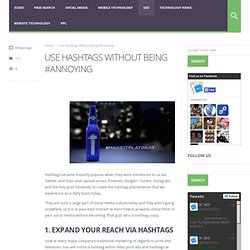 They are such a large part of social media culture today and they aren't going anywhere, so it is in your best interest to learn how to properly utilize them in your social media without becoming “that guy” who is hashtag crazy. 1. Ann Smarty of MyBlogGuest Responds To Google Penalty. Matt Cutts broke the news via Twitter early this morning that Google’s webspam team had penalized a “large guest blog network.” 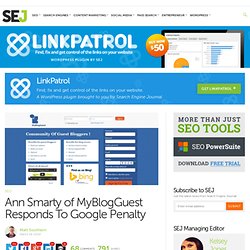 Matt did not identify the blog network, and at the time of this writing hasn’t publicly said anything further. Ann Smarty of MyBlogGuest later confirmed on Twitter that it was her site that received the penalty: Ann Smarty’s Response to Google’s Action Against MyBlogGuest Despite having a speaking engagement at Pubcon New Orleans today, Ann managed to find the time to provide a comment to Search Engine Journal: Yes, we realize and recognize the problem of many people abusing our community. Have we deserved the “hit” (now I know what that means lol!)? The reality is, Matt Cutts is using us for the PR game: To get more people scared.

The future? We have some great technology and we’ve build the most awesome team in the world. The internet marketing community was quick to respond. How to Protect Your Website from Negative SEO. The entire SEO industry experienced a major transformation over the past two years. 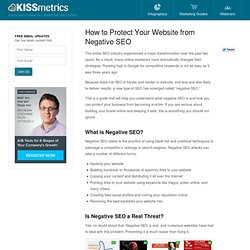 As a result, many online marketers have dramatically changed their strategies. Ranking high in Google for competitive keywords is not as easy as it was three years ago. The SEO Power of a Google +1. Photo by Dave Sutton There have been public statements from Google’s engineer Matt Cuts that they do not use the +1 as a ranking factor. 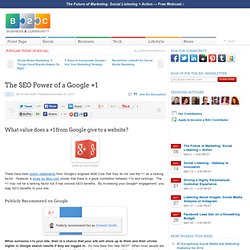 However, a study by Moz.com shows that there is a great correlation between +1s and rankings. The +1 may not be a ranking factor but it has several SEO benefits.