SEO Wars: A New Hope. Looking from a distance, the internet is an immense galaxy full of confronting fleets, hidden treasures, raiding pirates, and treacherous adventures. 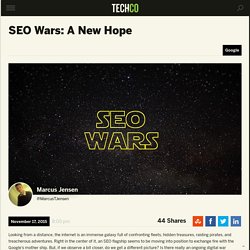 Right in the center of it, an SEO flagship seems to be moving into position to exchange fire with the Google’s mother ship. But, if we observe a bit closer, do we get a different picture? Is there really an ongoing digital war between SEO and Google? SEO determines the content placement in search results based on a number of ranking factors. It creates the avenues that direct internet traffic and affect the prospects of businesses around the globe. Leave Your Hat On Those wandering the exciting digital frontier of SEO often find themselves facing a choice- light or the dark side. SEO experts must pick a set of keywords, and this decision is based on thorough research, not assumptions. Design And Content Another crucial goal for marketers is to create an appealing website that grabs the attention of visitors. Is Google's Relationship With The Webmaster Community Becoming Fractured? For those who follow the SEO community, there have been many changes this year with Google’s outreach to SEOs and webmasters, starting when Matt Cutts went on leave. 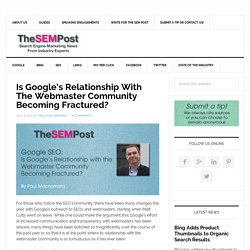 While one could make the argument that Google’s effort at increased communication and transparency with webmasters has been sincere, many things have been botched so magnificently over the course of the past year or so that it is at the point where its relationship with the webmaster community is as tumultuous as it has ever been. Last month, Google Capital backed service directory Thumbtack, was issued a manual penalty for unnatural links when their link building efforts were outed publicly. These type of manual actions typically require a very significant effort to get removed, and it is not at all unusual for weeks or even months to go by before a manual penalty is successfully removed.

In the instance of Thumbtack, the penalty was revoked in less than a week, and the site seemed to return to historic ranking positions. Google’s Mobile-Friendly Algorithm: Everything We Know (So Far) - ClickThrough Marketing. There’s less than a month to go until Google’s ‘mobile-friendly algorithm’ launches. 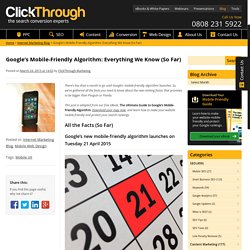 So, we’ve gathered all the facts you need to know about the new ranking factor that promises to be bigger than Penguin or Panda. This post is adapted from our free eBook, The Ultimate Guide to Google’s Mobile-Friendly Algorithm. Download your copy now, and learn how to make your website mobile-friendly and protect your search rankings. All the Facts (So Far) Google Acknowledge Misinformation Around Penguin & Panda Updates. A month ago, Google told us they would provide clarity over Panda updates since we were not sure if Google's contradictory statements around Panda running in real time versus not running since October. 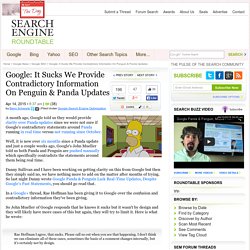 Well, it is now over six months since a Panda update and just a couple weeks ago, Google's John Mueller told us both Panda and Penguin are pushed manually which specifically contradicts the statements around them being real time. Danny Sullivan and I have been working on getting clarity on this from Google but then they simply said no, we have nothing more to add on the matter after months of trying. So last night Danny wrote Google Panda & Penguin Lack Real-Time Updates, Despite Google’s Past Statements, you should go read that. In a Google+ thread, Rae Hoffman has been giving it to Google over the confusion and contradictory information they've been giving.

Rae Hoffman I agree, that sucks. Yes, it really does suck. Quality Content Factors: A List That’s Actually Helpful. Is This The End Of The Penguin & Panda Era Shakeups And Recoveries? [INFOGRAPHIC] Google Killed The Long Tail For Search. What is Search Engine Optimization (SEO)? 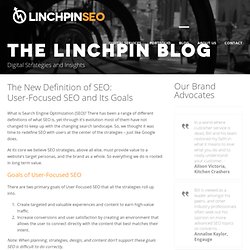 There has been a range of different definitions of what SEO is, yet through it’s evolution most of them have not changed to keep up with the changing search landscape. So, we thought it was time to redefine SEO with users at the center of the strategies – just like Google does. At its core we believe SEO strategies, above all else, must provide value to a website’s target personas, and the brand as a whole. So everything we do is rooted in long term value. Goals of User-Focused SEO There are two primary goals of User-Focused SEO that all the strategies roll up into. Create targeted and valuable experiences and content to earn high-value traffic.Increase conversions and user satisfaction by creating an environment that allows the user to connect directly with the content that best matches their intent.

Note: When planning, strategies, design, and content don’t support these goals SEO is difficult to do correctly. Google Smashes U.S. Search Market Share Record, Closes in on 70% Is This the Birth of a Link Removal Industry.