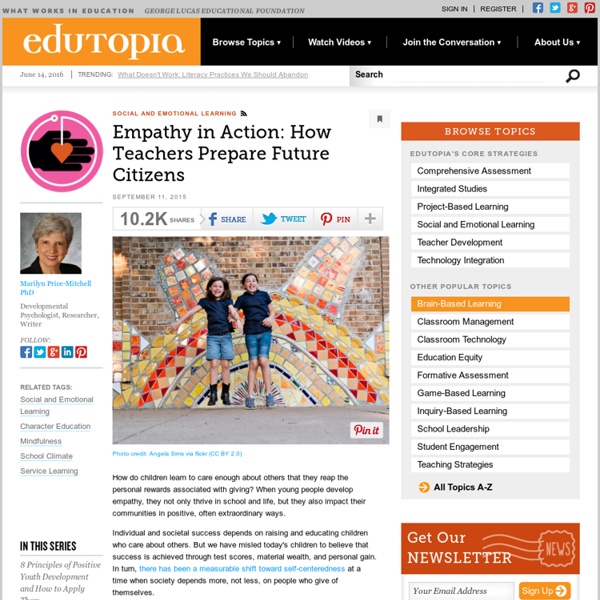 How do children learn to care enough about others that they reap the personal rewards associated with giving? When young people develop empathy, they not only thrive in school and life, but they also impact their communities in positive, often extraordinary ways. Individual and societal success depends on raising and educating children who care about others. But we have misled today's children to believe that success is achieved through test scores, material wealth, and personal gain. In turn, there has been a measurable shift toward self-centeredness at a time when society depends more, not less, on people who give of themselves. Developed through emotional attachment with other human beings, empathy is our ability to recognize, feel, and respond to the needs and suffering of other people. The Foundation of Caring and Engaged Citizenship Image credit: Marilyn Price-Mitchell, PhD 6 Empathy-Building Habits of Great Teachers 1. 2. 3. These civic roles are intertwined with developing empathy.

What my two-year-old has taught me about language learning – Part 2 Learning a language is a complex process and the ease with which nearly every child becomes a native speaker in their language has perplexed many for generations. The child learns to discriminate between the individual sounds of his/her language, identify word boundaries, attach meaning to lexis and acquire the complex grammatical structures, all of which is considered difficult for the second language learner, but yet seemingly effortless to the child. Although there are significant differences between first language acquisition (FLA) and second language acquisition (SLA), I have found through observing my two-year-old daughter’s language development important lessons even for the EFL teacher. In my last blogpost, I looked at the blurry distinction between lexis and grammar, the importance of imitation without fear, and the power of inductive learning and pattern-deduction. Here are two more things my two-year-old has taught me about language learning: 7.

Eight ways to build student leadership skills in your school Check out these eight HOT ideas guarenteed to put some sizzle in your student leadership program: 1. Challenge student leaders to work out personal goals or achievements. Research clearly shows that adults and kids who set goals usually achieve more from a program or a year than those who don’t. So get your student leaders to identify 2 or 3 goals or achievements for the year. edutopia What should you do if you are a school counselor, administrator, principal, or teacher interested in bringing mindfulness programming to your whole school? What are best practices and sound strategy to design and implement mindfulness effectively throughout your school? Across the country, mindfulness education is becoming more popular. This practice teaches students to pay attention to the present moment with compassion and non-judgmental awareness.

~ Tales of a Trainee Teacher ~ The other day, I was watching a documentary about extreme weather and natural disasters, and their effects on schools across the globe (it really wasn’t as dull as it sounds, honestly!). I was amazed at how well handled some events were, but totally shocked in other ways. For example, the documentary showed footage of an earthquake hitting a school in Japan. As soon as the room started shaking, the teacher ordered everybody under the desks, and obviously having done earthquake drills, this was all completed safely within about two seconds flat. A minute or so later, [what I’m guessing was] a more senior member of staff ran to all the classrooms, and ordered everybody out of the building, which was also carried out quickly and calmly.

When Cops Choose Empathy About four years ago, in a city park in western Washington State, Joe Winters encountered a woman in the throes of a psychotic episode. As he sat down next to her, she told him that she had purchased the bench that they now shared and that it was her home. “I didn’t buy the hallucinations, but I tried to validate the feelings underneath them,” Winters told me.

Looking At (but not seeing) the Same Things The room was packed. Twenty-five ninth graders and their teacher, a three-person camera crew, fifteen parents of incoming eighth graders and the principal stood flat-back against three of the four walls. For a while we all occupied the same space together. We observed the same lesson, listened to the same voices, and breathed the same air. Turning 32 Years Into 6 Simple Takeaways Teacher Advice? A Teacher Reflects Back On 32 Years And Offers 6 Simple Nuggets Of Advice by Sharon Davison, Kindergartenlife Blog Our first entry from our Diverse Teacher Voices program comes from Sharon Davison, a Kindergarten teacher from Vermont who responded to the “Dear First Year Me” prompt.

Empathy Is Still Lacking in the Leaders Who Need It Most Many people and a host of commentators instinctively recoiled at the callous management practices described in a scathing New York Times article last month about Amazon. So did Jeff Bezos, Amazon’s founder and chief executive. In a memo to Amazon employees, he wrote, “Our tolerance for any such lack of empathy needs to be zero.” He’s right, not only on humanitarian grounds but also for reasons that should appeal to a hard-headed businessman like him. At Amazon and other businesses, the “e-word” should be the watchword.

Showing The Way In the Aftermath Of Tragedy As a social studies teacher, other than the daily worry about particular students, I felt the most anxiety about my practice the day after an atrocity. How do I teach students about these events and not terrify or discourage them from engaging in the world? I felt paralyzed in having to face them, ready to answer the why question, or ready to exude certainty that this event was surely an anomaly. Adding to the challenge for teachers today is that students sit in our classrooms full of vivid images of the events from popular media, which fuels the fire of helplessness and doom. Because the world of late has given us so much to explain and reassure them about, this anxiety is hard to shake.

edutopia Student: I opened it up, and there was a root inside. Anne: What's exciting about the inquiry models that we go far and above what the curriculum expectations are. Kids are invested in their learning, and they're able to transfer and apply what they're learning in school to the real world. Lindsay: Inquiry based learning allows the students to be the thinkers. 5 Ways to Prevent K-12 School Violence School violence, when it occurs, has a high impact on schools and communities where the incident takes place. Rare but deadly incidents of violence, such as the Columbine High School Massacre of 1999 or the more recent school shooting at Sandy Hook Elementary in Connecticut, bring the harsh realities of school violence to light. These are both extreme examples, of course, but violence in smaller doses still occurs in schools around the country.

amazon.co I know it is absurdly early in the year to be choosing the top book of the year, but here goes. I recommend Empathy by Roman Krznaric for both the quality of the content and its importance. Empathy, he tells us, is ‘the art of stepping imaginatively into the shoes of another person, understanding their feelings and perspectives, and using that understanding to guide your actions.’ edutopia For many educators, conferences are coming up soon, and it can be a stressful time of the school year. To help parents and educators prepare for parent-teacher conferences, we've rounded up a variety of web resources. From ideas for highlighting student progress, to questions every parent should ask, these are some of our favorite articles and resources that cover parent-teacher conferencing. Hope you all have a great rest of the school year!