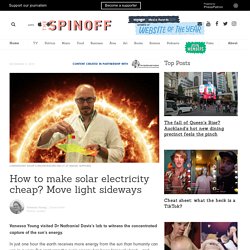 In just one hour the earth receives more energy from the sun than humanity can use in a year. But capturing the sun’s energy has been famously hard – and expensive – because it is spread out of a large area. When physicist Dr Nathaniel Davis left the hot Aussie sun of his homeland for a PhD position in the cooler climes of Cambridge University in the UK the sun followed him into his lab. At Cambridge, he worked on a technology called solar concentrators, clever materials that trap photons and send them sideways, where they can be caught by solar panels and made into electricity.

He’s now brought this solar research to New Zealand where he is exploring how this technology will make solar technology more affordable. In his lab, as he held up a small flat square of plastic it unexpectedly glows brightly from its edges. “This material inside absorbs light and re-emits it. Mercury to build $256 million wind farm near Palmerston North. Nuclear waste article. Geothermal Energy. If you kept digging, what would you find? 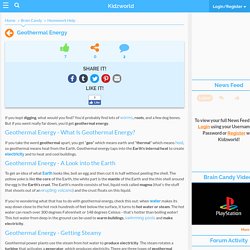 Geothermal Energy - Getting Steamy Geothermal power plants use the steam from hot water to produce electricity. Dry Steam - The steam goes directly from underground wells to a power plant. Renewable Resource. Its hard to imagine that water can be used to create electricity. 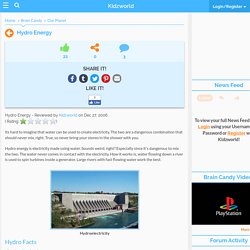 The two are a dangerous combination that should never mix, right. True, so never bring your stereo in the shower with you. Hydro energy is electricity made using water. Sounds weird, right? Especially since it's dangerous to mix the two. Photovoltaic Cell. With the price of non-renewable energy sources soaring, Kidzworld takes a look at the environmentally friendly energy source we all know and love - our sun! 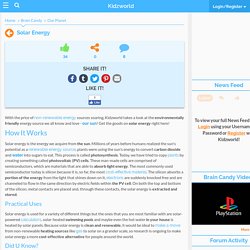 Get the goods on solar energy right here! Solar energy is the energy we acquire from the sun. Millions of years before humans realized the sun's potential as a renewable energy source, plants were using the sun's energy to convert carbon dioxide and water into sugars to eat. This process is called photosynthesis. Today, we have tried to copy plants by creating something called photovoltaic (PV) cells.

Practical Uses Solar energy is used for a variety of different things but the ones that you are most familiar with are solar-powered calculators, solar-heated and maybe even the hot water in your house is heated by solar panels. Did U Know? Solar energy is measured in kilowatt-hours. Related Stories: Renewable Energy - The Environmental Literacy Council. University of Colorado Boulder. What Is Renewable Energy? 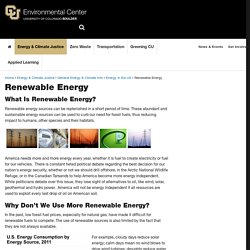 Renewable energy sources can be replenished in a short period of time. These abundant and sustainable energy sources can be used to curb our need for fossil fuels, thus reducing impact to humans, other species and their habitats. America needs more and more energy every year, whether it is fuel to create electricity or fuel for our vehicles. There is constant heted political debate regarding the best decision for our nation's energy security, whether or not we should drill offshore, in the Arctic National Wildlife Refuge, or in the Canadian Tarsands to help America become more energy independent. While politicians debate over this issue, they lose sight of alternatives to oil, like wind, solar, geothermal and hydro power. Renewable energy - National Geographic. The wind, the sun, and Earth are sources of renewable energy. 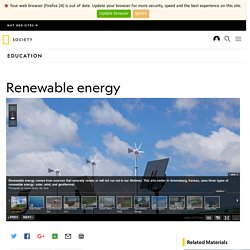 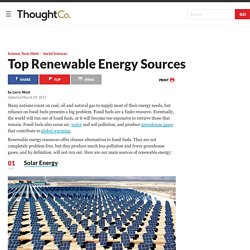 Fossil fuels are a finite resource. Eventually, the world will run out of fossil fuels, or it will become too expensive to retrieve those that remain. Fossil fuels also cause air, water and soil pollution, and produce greenhouse gases that contribute to global warming. Renewable energy resources offer cleaner alternatives to fossil fuels. They are not completely problem-free, but they produce much less pollution and fewer greenhouse gases, and by definition, will not run out.