They’re Among the World’s Oldest Living Things. The Climate Crisis Is Killing Them. 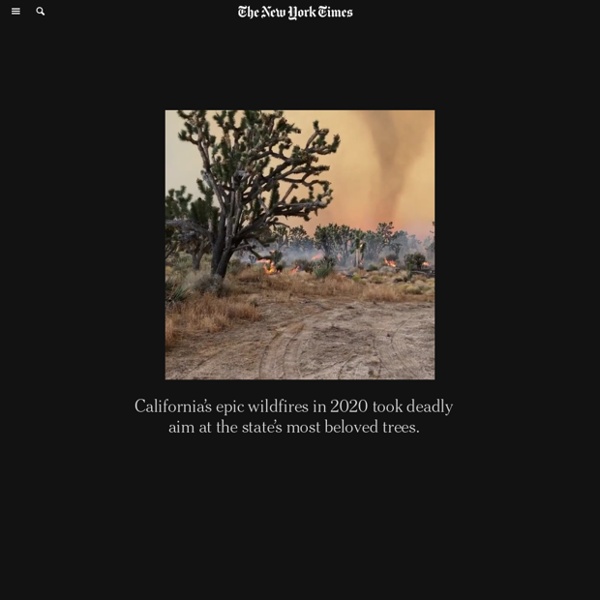 Sequoia Crest, Calif. — Until a few years ago, about the only thing that killed an old-growth giant sequoia was old age. Not only are they the biggest of the world’s trees, by volume — the General Sherman Tree, considered the largest, is 36 feet in diameter at its base and 275 feet tall — they are among the oldest. At least one fallen giant sequoia was estimated to have been more than 3,200 years old. They last so long that, historically, only one or two of every thousand old-growth trees dies annually, according to Nate Stephenson, a research ecologist for the United States Geological Survey. Fire always was a frequent visitor to sequoia groves, but rarely a threat. Mature sequoias are virtually fireproof because the bark can be several feet thick. Until now. Dr. “I could go, ‘Oh, there’s a fir needle, that’s incense cedar, that’s oak, that’s a pine,’” Dr. Intense fires engulfed the giant sequoia groves, killing trees. S.Q.F. In all, thousands of trees died in groves damaged by fire. Dr.

Related:  Useful information • The Only Earth We Have • Places • biodiversité

Data reveal deadliness of COVID-19, even in young adults Even though all-cause mortality due to COVID-19 may not be known for a while, two new studies highlight that 173,300 (79.5%) of excess deaths from March through August were COVID related, with 4,535 deaths occurring from March through July in younger adults ages 25 to 44, or 38% of all excess deaths in that group. Data from the latter study helped inspire a New York Times editorial yesterday by the likely next director of the US Centers for Disease Control and Prevention (CDC) and her colleagues, who tried to dispel the myth that the disease is not deadly in younger adults. The first study, published in the Annals of Internal Medicine, found that almost 220,000 excess deaths occurred between March and August, even after adjusting for a growing and aging US population. As the Annals researchers write, though, "Estimating the true burden of COVID-19 will require continued monitoring of excess deaths by cause.

Watching Earth Burn I have a pastime, one that used to give me considerable pleasure, but lately it has morphed into a source of anxiety, even horror: earth-watching. Let me explain. The earth from space is an incomparably lovely sight. I mean the whole planet, pole to pole, waxing and waning and rotating in that time-generating way it has, and not the views from the International Space Station, which is in a low orbit about 200 miles up and gives us only part of the whole. My earth-watching, made possible by NOAA and Colorado State University websites, originates in three geostationary weather satellites parked in exceedingly high orbits above the Equator.

Revisiting the Unseen Corners of the World At the onset of the coronavirus pandemic, with travel restrictions in place worldwide, we launched a new series to help transport you, virtually, to some of our planet’s most beautiful and intriguing places. This week, after 40 installments, we look back at some of the highlights — from hat-making workshops in Ecuador and the wilds of Alaska to lush Zambian valleys. A decade ago, the photographer Robert Presutti accompanied a friend to a convent in rural Georgia: the Phoka Nunnery of St. Nino. A nun and two novices had moved to the area years earlier and had begun resurrecting an 11th-century church from its ruins. Led by the abbess, Elizabeth, the group of three slowly grew, so that by the time Mr.

Where 2020's Record Heat Was Felt the Most 2020 was effectively tied with 2016 for the hottest year on record, as global warming linked to greenhouse gas emissions showed no signs of letting up. This analysis of global temperatures, by the NASA Goddard Institute for Space Studies and released Thursday, found that 2020 was slightly warmer than 2016. But the difference was insignificant, the institute’s director, Gavin Schmidt, said in an interview. “Effectively it’s a statistical tie,” he said. New documentary about Canada's boreal forest reveals how it's in trouble, director says The director of a new documentary about Canada's boreal forest called Borealis says his team realized while making it that the iconic wilderness was in a lot of trouble — including in Alberta. "There's a big shot toward the end of the film where it's a drone shot that runs for like three minutes over Jasper National Park. And most of the trees are dead because of the mountain pine beetle," director Kevin McMahon told CBC Calgary's The Homestretch on Tuesday.

In 2020, We Were There: The Year’s 13 Most Popular Dispatches As in more typical years, our correspondents in 2020 sent dispatches from some of the world’s most far-flung, hard-to-access and downright dangerous places — from the deep chill of Siberia to the blazing heat of the Australian Outback; from the wilds of a jaguar preserve in Argentina to the inside of an armored personnel carrier crowded with French Foreign Legion troops in Mali. But 2020 was no ordinary year. With travel restrictions to fight the pandemic imposed almost everywhere, our correspondents had to be more inventive. Instead of getting on a plane — or a boat to a drowning island — they often set off on more local journeys to convey in intensely personal writing how the countries, cities and neighborhoods they called home were experiencing a devastating health crisis.

Do These A.I.-Created Fake People Look Real to You? There are now businesses that sell fake people. On the website Generated.Photos, you can buy a “unique, worry-free” fake person for $2.99, or 1,000 people for $1,000. If you just need a couple of fake people — for characters in a video game, or to make your company website appear more diverse — you can get their photos for free on ThisPersonDoesNotExist.com. Inside the C.I.A., She Became a Spy for Planet Earth Linda Zall played a starring role in American science that led to decades of major advances. But she never described her breakthroughs on television, or had books written about her, or received high scientific honors. One database of scientific publications lists her contributions as consisting of just three papers, with a conspicuous gap running from 1980 to 2020. The reason is that Dr. Zall’s decades of service to science were done in the secretive warrens of the Central Intelligence Agency.

Hole n" the Rock – Monticello, Utah - Atlas Obscura Travelers along U.S. Highway 191 in Southeastern Utah are amazed to discover this unique, 5,000 square foot home carved directly into a rock. Albert Christensen began construction of his rock home in the 1940s, digging, carving, and blasting for 12 years before moving his family in and opening a unique diner for desert passersby. Though Albert died in the late 50s, his wife Gladys continued to live in the rock and run the diner for many years. She died in the 70s, and both she and her husband are buried on the grounds of the rock they called home.

What To Do With a Broken Zipper Duaa Awchi / EyeEmGetty Images The common zipper is a remarkably durable device that has remained ostensibly unchanged for more than a century. And today, zippers remain popular as the simplest, most reliable way to quickly open and securely close everything from jackets and jeans, to tents and backpacks.

The Social Life of Forests The Social Life of Forests By Ferris Jabr Photographs by Brendan George Ko As a child, Suzanne Simard often roamed Canada’s old-growth forests with her siblings, building forts from fallen branches, foraging mushrooms and huckleberries and occasionally eating handfuls of dirt (she liked the taste). Her grandfather and uncles, meanwhile, worked nearby as horse loggers, using low-impact methods to selectively harvest cedar, Douglas fir and white pine. 14 Bizarre And Fascinating Facts About Life In Norway You Probably Didn't Know It's always fun to learn something new about different cultures and traditions—be it an exotic island with just a few inhabitants, or a wealthy European country with over 5 million citizens. Every part of the world has something new to bring to the table and Norway is no exception. For instance, did you know that if it weren't for Norwegians, we wouldn't have salmon sushi? Or that a penguin named Nils Olav was presented the title of Colonel-in-Chief of the Norwegian King's Guard by the king?

South Korea Leads World in Innovation as U.S. Exits Top Ten South Korea returned to first place in the latest Bloomberg Innovation Index, while the U.S. dropped out of a top 10 that features a cluster of European countries. Korea regained the crown from Germany, which dropped to fourth place. The Asian nation has now topped the index for seven of the nine years that it’s been published. Singapore and Switzerland each moved up one spot to rank second and third.

Related:
Related:  Useful information   -  The Only Earth We Have   -  Places   -  biodiversité