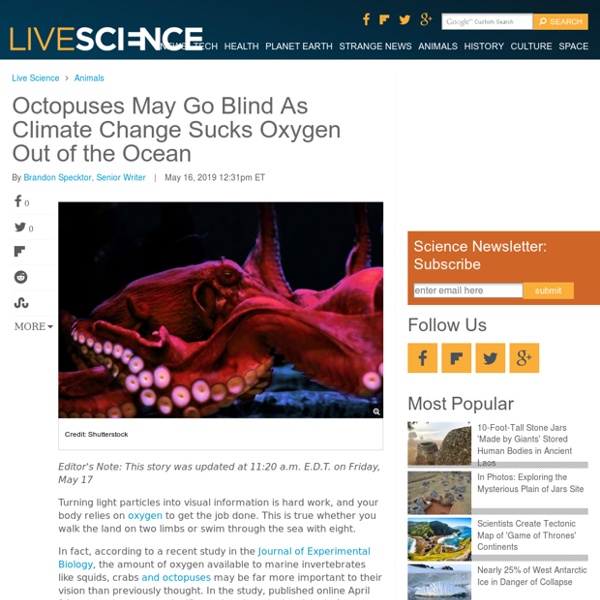 Editor's Note: This story was updated at 11:20 a.m. E.D.T. on Friday, May 17 Turning light particles into visual information is hard work, and your body relies on oxygen to get the job done. This is true whether you walk the land on two limbs or swim through the sea with eight. In fact, according to a recent study in the Journal of Experimental Biology, the amount of oxygen available to marine invertebrates like squids, crabs and octopuses may be far more important to their vision than previously thought. In the study, published online April 24, researchers saw a significant drop in retinal activity in four species of marine larvae (two crabs, an octopus and a squid) when the animals were exposed to reduced-oxygen environments for as little as 30 minutes. [8 Crazy Facts About Octopuses] For some species, even a minuscule drop in oxygen levels resulted in almost immediate vision loss, eventually causing near-total blindness before the oxygen was cranked back up again.

Related:  The Only Earth We Have • Concerning ANIMALS • Thoughts - Politics, Policy, Effects • Heal the World - or not

Meet the Rare Swimming Wolves That Eat Seafood They move like ghosts along the shorelines of Canada's Vancouver Island, so elusive that people rarely see them lurking in the mossy forests. British filmmaker Bertie Gregory was one of the lucky ones: He saw coastal wolves—also known as sea wolves—in 2011. "There is something about being in the presence of a coastal wolf—they just have this magic and aura around them," he says. That experience inspired him to return and document the animals for National Geographic’s first YouTube series, wild_life with bertie gregory, which launches August 3. “Coastal wolves are such a unique predator, and they are hunting in this absolutely epic landscape,” says Gregory. Roughly the size of Maryland, the island and its remote western fringes are still a wild frontier in the Pacific Northwest.

UN Slams U.S. Abortion Laws as "Extremist Hate" and "Torture" Want the best from VICE News in your inbox? Sign up here. The United Nations' deputy high commissioner for human rights said on Wednesday that the numerous abortion bans being passed in the United States are a form of “extremist hate” that amount to “torture.” OB/GYN Shares The Many Reasons Her Patients Had For Abortions, Says They’re All Completely Valid Alabama has made a home in the headlines after Governor Kay Ivey signed the Alabama Human Life Protection Act – the countries most restrictive abortion law to date. In response women everywhere have used whatever platform they have to share their opinions and experiences, the most popular one being social media. Several hashtags have popped up to encourage and destigmatize the dialogue surrounding abortions such as #ShoutYourAbortion and #YouKnowMe, and while many agree that sharing these stories are important, others – like this OB/GYN – also think that a woman shouldn’t have to share or have a traumatic story for her right to choose to be respected. This OB/GYN responded to the new abortion law in Alabama in a powerful post that has since gone viral An obstetrician-gynecologist with almost 17-years of experience shared a post on the website Scary Mommy as a response to Alabama’s law, that only allows abortions to prevent a serious health risk.

The Social Life of Forests The Social Life of Forests By Ferris Jabr Photographs by Brendan George Ko As a child, Suzanne Simard often roamed Canada’s old-growth forests with her siblings, building forts from fallen branches, foraging mushrooms and huckleberries and occasionally eating handfuls of dirt (she liked the taste). Her grandfather and uncles, meanwhile, worked nearby as horse loggers, using low-impact methods to selectively harvest cedar, Douglas fir and white pine. They took so few trees that Simard never noticed much of a difference. The forest seemed ageless and infinite, pillared with conifers, jeweled with raindrops and brimming with ferns and fairy bells.

The Children’s Book That Caused Japan’s Raccoon Problem Today, raccoons are a nuisance animal in Japan, rummaging through trash, stealing goods from vendors, feasting on crops and even damaging ancient Japanese temples with their sharp claws and abundant poop. But their invasion started back in 1977, when the kids of Japan were going crazy for a cartoon raccoon named Rascal. He was cute and mischievous and the star of an anime series adaptation of a favorite children’s book, written by American author Sterling North. As Eric Grundhauser over at Atlas Obscura explains, the book, entitled Rascal: A Memoir of a Better Era, was released to western audiences in 1963 and told the story of North’s adventures with his childhood pet raccoon. Audiences ate the warm and fuzzy story right up, and Disney even made it a live-action movie in 1969.

Is the U.S. a Democracy? A Social Studies Battle Turns on the Nation’s Values LANSING, Mich. — Bruising political fights are usual business in Becky Debowski’s eighth-grade social studies classroom. From a model Constitutional Convention to a bare-knuckle debate in Congress over slavery, she regularly has students assume roles of partisans throughout American history, like Abraham Lincoln and John C. Calhoun. After the exercises, the class comes back together to debate whether the nation lived up to what the state of Michigan calls “core democratic values,” such as equality, liberty and diversity.

Broccoli Is Dying. Corn Is Toxic. Long Live Microbiomes! Editor’s Note (9/3/2019): This post has been substantially rewritten to change or eliminate claims and sourcing that did not meet Scientific American’s editorial standards. The revised post can be found here. As food writer Mark Bittman recently remarked, since food is defined as “a substance that provides nutrition and promotes growth” and poison is “a substance that promotes illness,” then “much of what is produced by industrial agriculture is, quite literally, not food but poison.” Of course, it doesn’t have to be this way.